Pooled testing: What it is and how it can be used for the coronavirus 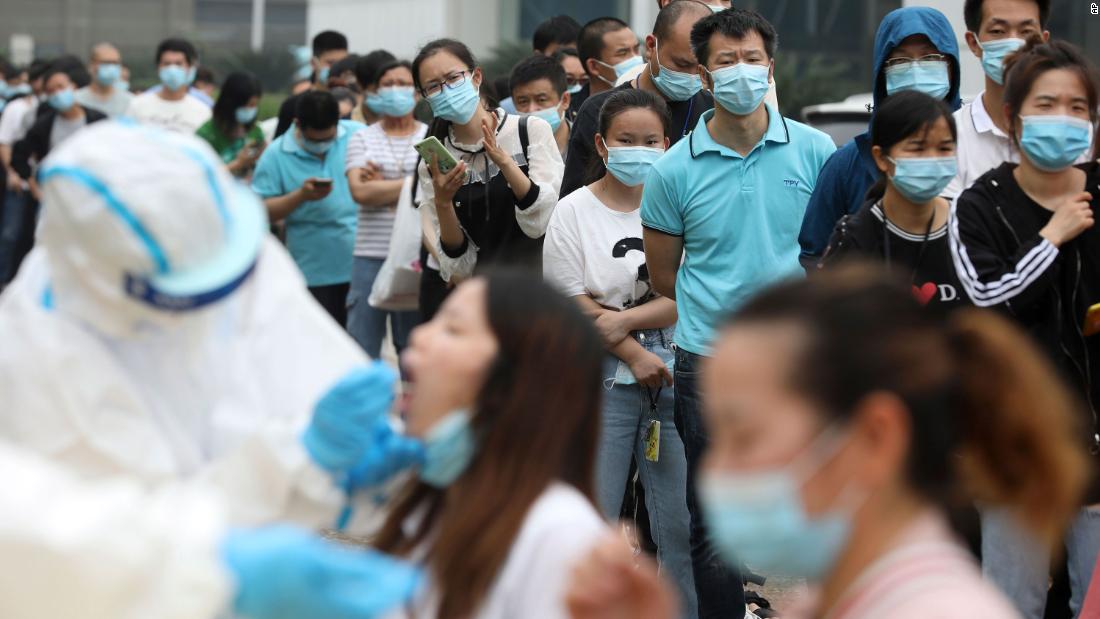 It isn’t feasible to continually test everyone at a whole test per person. There simply aren’t enough resources and supplies.

But pool testing, under the right circumstances, could ultimately involve fewer tests and supplies, yet cover many more people than are tested now.

“Pooling would give us the capacity to go from half a million tests per day to potentially 5 million individuals tested per day,” Dr. Deborah Birx, a White House coronavirus task force official, told the American Society for Microbiology last month.

Preparations are underway. The US Food and Drug Administration last month published guidance for developers that want to make and use tests for pooled samples.

Here is a closer look:

How does pool testing work?

At a basic level, this is pool testing:

Say a lab has collected samples — like those collected from nasal swabs — from five people. The lab will take a portion from each sample and mix those portions together, creating a pool.

“If the pooled sample is negative, it can be deduced that all patients were negative,” Dr. Jeffrey Shuren, director of the FDA’s Center for Devices and Radiological Health, wrote last month.

“If the pooled sample comes back positive, then each sample needs to be tested individually to find out which was positive.

There is an important caveat: Basic pool testing increases the chance of false negatives. Among the reasons: Samples are diluted in pools, so a true positive might be missed, according to Dr. Manisha Juthani, associate professor of medicine and epidemiology at Yale School of Medicine.

Experts say there are ways to mitigate that risk, which we will explore further below.

Is this for the general population, or more narrow groups, like schools and factories?

A lot will depend on circumstances, needs and imagination.

First, know this: Pool testing should be done only where prevalence of the disease is low, according to Eugene Litvak, adjunct professor of operations management at Harvard University’s school of public health.

That is, pool testing should be done where you’d expect a lot of negative results and you’re just trying to catch the few cases that may be out there, Litvak and other experts say.

To put it roughly, there’s no point pool testing somewhere that already has a lot of cases, such as a nursing home with multiple positive patients. Virtually every pool would turn up positive; you might as well have tested everyone individually.

Having said that, there are a lot of places where pool testing could make sense, according to Juthani and other experts:

“Widescale pooled testing can be highly cost effective and time saving to potentially quickly identify positive cases, quarantine them, and contract trace from there forward to prevent further spread of disease in a community,” Juthani, who also is an infectious disease specialist at Yale Medicine, told CNN.

One scenario would be pool testing in communities that just had their first Covid-19 hospitalizations, Birx said in her June 22 address to the ASM.

The goal would be to find infected people — especially those who may be spreading the disease without showing symptoms — and isolate them before the spread worsens, Birx said.

• Neighborhoods that need to be assessed in an outbreak

In this scenario, an entire family could be part of one pool, Juthani said.

Pool testing could be a key tool for schools, organizations or workplaces that want to stay open safely, by monitoring their people periodically.

“If one wing of a dorm, or one classroom in a school, is a pool and tested all together, that group could be cleared quickly,” Juthani said.

Litvak, who also is CEO of the nonprofit Institute for Healthcare Optimization near Boston, stressed that pool testing is useful only if it can be done in minutes, and not days.

That’s because if days elapse, you’ve potentially allowed an infected person to spread the disease while waiting.

Labs’ use of robotics is necessary, both for speed, and to keep track of pools and samples, Litvak told CNN.

Such robotics have existed for decades, said Litvak, who added he “would be surprised if (capacity in the US) is a problem.”

What is the history of pool testing, and where is it being done now?

Some countries already have been using pool testing for the coronavirus pandemic.

“If you look around the globe, the way people are doing a million tests or 10 million tests is they’re doing pooling,” Birx said last month.

In May, authorities in Wuhan, China, had conducted millions of tests in days, in part by conducting pooled testing, Chinese news outlet Caixin reported.

How many people’s samples could be in one pool?

A recent study in Israel recently demonstrated that, for Covid-19 pool testing, a test could evaluate pools of at least 32 nasal samples without losing sensitivity, or the ability to correctly identify true positives, Litvak said.

But US health officials generally have been talking about pools of lower numbers. Birx has spoken of pools of five or greater.

Generally speaking, the greater the disease’s prevalence in a population, the smaller your pools have to be, Litvak said.

How does this work out to fewer tests overall?

But, that’s why pool testing should be done in populations where the disease isn’t believed to be widespread. Under those circumstances, you presumably clear a lot of people with just one test.

Juthani gives this example under the basic procedure: Presume you take 100 people, and break them into 20 pools of five. Now presume a prevalence rate of just 5%, meaning there will be five true positives out of 100.

If each one of the five positives turns up in a separate pool, five of your 20 pools are positive.

So, you ran 20 pool tests, and because of the five pool positives, you have to additionally test 25 individuals.

It gets inefficient if the prevalence rate is high. If there were 30 true positives in your group of 100, all of your 20 pools of five may have at least one positive sample. If all pools test positive, you need to test all individual samples — so now you’ve run 120 tests (20 pool and 100 individual), which is a waste of time and resources.

How do you guard against false negatives?

The FDA warns, as noted above, that pool testing could lead to more false negatives than simple individual testing if the results are “not properly validated.”

In that situation, using one of the scenarios above (5% prevalence; 100 subjects; 20 pool tests), you’d have:

• 25 individual tests because of the five positive pools.

You would have spent 60 to 65 tests — still fewer than the 100 you’d otherwise have done individually.

Other issues could lead to false negatives, including poor specimen collection, or poor tests with low specificity, Juthani says.

Litvak argues for an even more rigorous approach, called split-pool testing. He said his 1990s research demonstrated this is dramatically more accurate than simple pooled testing.

1) Test a pool — say, it’s eight people — twice. If the pool is negative twice, then clear everyone.

2) If the pool tests positive either time, then, split the pool in half, and then test both halves twice. In this example, create two pools of four, and test each pool twice.

3) Clear any pool that was negative. If either pool of four tests positive, split that pool again — two pools of two, and repeat, until you’re down to individual tests.

Split-pool testing should be the preferred protocol, he said.

“Given the urgent need for large-scale testing in the US and limited resources, the right pooled testing protocol becomes a priority,” he said.