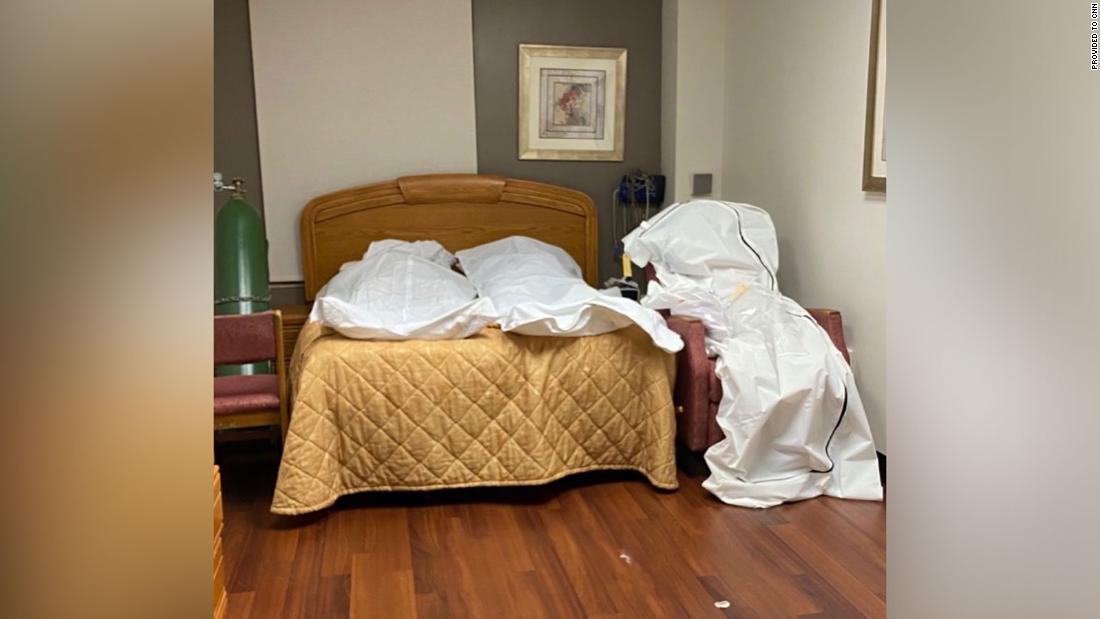 CNN acquired the photos from an emergency room worker.

Two other emergency room workers confirm the photos are an accurate portrayal of the scene taking place at the hospital during early April, during one 12-hour shift they describe as overwhelming.

The ER workers spoke to CNN on the condition of anonymity out of concern for their jobs.

The two sources tell CNN that at least one room, which is typically used for studies on sleeping habits, was used to store bodies because morgue staff did not work at night, and the morgue was full.

“All I know is we ran out of beds to keep our patients on so we couldn’t spare any for the bodies,” said one ER worker, who witnessed the bodies in the room.

In the photo two bodies were put on a bed, side by side, and another body is placed in a chair next to the bed. All three bodies are in white body bags.

“It was because we hadn’t gotten our outside freezers yet, so those rooms had beds and the morgue people don’t work over night,” said the ER worker.

In response to this incident, two hospital ER workers tell CNN that the hospital decided to order portable refrigerator storage units to store the bodies.

On Saturday, CNN visited the hospital. Five refrigerated storage units could be seen in the parking lot.

And, in another photo obtained by CNN from an emergency room worker, body bags are shown overlapping each other inside a refrigerated unit at the hospital.

Two other ER workers confirm to CNN that they have personally seen victims placed like this inside the units due to the growing number of bodies.

They say that blue bags shown in the photo are the personal effects of the deceased.

“Bodies are definitely double stacked on the floor. There is no lift to help put the bodies on the shelf,” said one ER worker who has witnessed similar scenes of bodies.

In response to a call for comment, a hospital spokesman tells CNN that a statement regarding the photos will be sent shortly.

But in a statement to CNN last week, Brian Taylor, the hospital’s director of communications and media relations said, “Like many hospital systems, the demand to care for the ever-increasing number of patients is putting a strain on our resources and staff.”

“Surge plans are in place at our hospital to handle the increase in patient volumes to ensure we provide the safest and most appropriate care for our patients,” Taylor said in the written statement.

Six ER workers told CNN that the hospital was treating about 100 to 130 patients at a time during a period in early April, when it was at its highest volume. Over the past several days, according to the workers, the case load has dropped significantly to about 50 patients, which they say is a more manageable number.