Pfizer vaccine: How one company makes its millions of Covid-19 vaccine doses 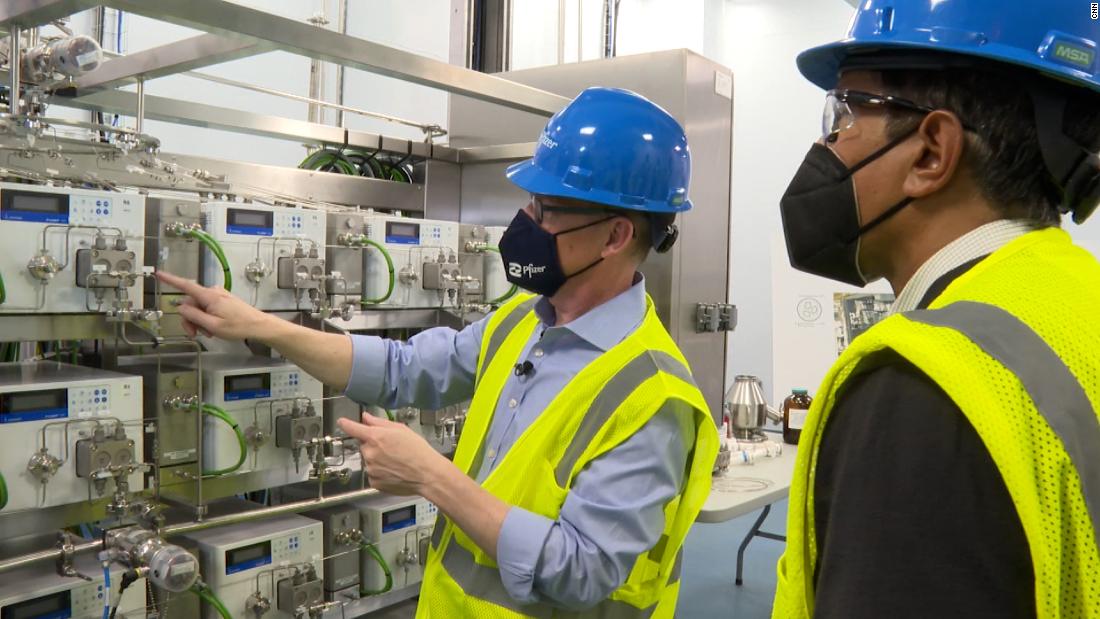 Pfizer has now shipped more than 100 million doses to the US and it said this week it has successfully met its goal of 120 million doses released and ready for shipment by the end of March.

For Mike McDermott, Pfizer’s president of global supply, the mission is still more doses. Billions of them.

“Our goal has been running 24/7, make as many doses as possible. I actually don’t even have a production goal,” McDermott told CNN Chief Medical Correspondent Dr. Sanjay Gupta during an exclusive tour of its manufacturing facility in Kalamazoo, Michigan, in March. “Our goal is to produce as much as possible to get to 2 billion doses this year as soon as possible.”

Pfizer/BioNTech’s global goal is 2.5 billion doses by the end of the year.

Pfizer met its first milestones with substantial upfront investment, and it had no guarantees.

Pfizer was part of Operation Warp Speed as a potential supplier for Covid-19 vaccines and had a purchase agreement for an initial 100 million doses. However, the company didn’t receive federal funding for the research or development of the vaccine.

So while Pfizer could repurpose some of its equipment at its main manufacturing site in Kalamazoo, most of what’s there now didn’t exist a year ago.

“Pfizer has spent at risk, almost $2 billion on the overall program. From manufacturing, my team spent $500 million, before we even got out of clinical trials. So all completely at risk. We didn’t know if we had a product that was going to work,” said McDermott.

Before Pfizer decided on its final vaccine candidate, it was looking into four different options. That meant McDermott and his team had to be ready to go in any direction.

“I think about like, we’re going to have dinner tonight, and we need to get dessert ready, but I don’t know what dessert we’re having. So you just start buying ingredients,” he said. “Maybe we’re making a cake, maybe we’re making brownies. Let’s bring in the standard materials that we need. So filling up this pantry was quite, quite expensive.”

One of the biggest rate-limiting steps of this production, according to McDermott, has been the availability of raw materials and specifically lipids, the fatty substance that safely houses the mRNA until it can get to our cells.

“Lipid nanoparticle hasn’t been used in a large commercial product. So the lipid suppliers weren’t very large. And so we work very closely with them to build more lipids capacity, and actually making lipids in this site in Kalamazoo, Michigan,” said McDermott.

The heart of mRNA

Pfizer/BioNTech’s Covid-19 vaccine can simply be described as mRNA housed in a lipid coating, but the successful production of that by the millions all came down to a something the size of a quarter.

“
The heart of this whole machine is what’s called an impingement jet mixer,” said McDermott as he is twirled it around his fingers.

The impingement jet mixer, also known as the tea stirrer, works by simply pumping lipids in one side and mRNA in the other, forcing them together with 400 pounds of pressure. That’s what creates the lipid nanoparticle which is essentially the vaccine.

These aren’t just any lipids, Pfizer/BioNTech had to design the right combination of four different lipids that would not only protect the mRNA on the way to cells, but then release the mRNA once it gets there.

While the process of creating lipid nanoparticles is not new, McDermott said the challenge was scaling up this process.

“The first time somebody showed me this impingement jet mixer, I said, ‘You can’t be serious?’ Like how could you put billions of doses through here? So my confidence level was actually quite low. Not that it could be done, I knew it worked at this scale, but how could you multiply it?”

McDermott’s first thought was to go bigger, make a large-scale tea stirrer to allow more volume to pass through. When that didn’t work, they ended up replicating the quarter-sized mixers and put technology in place to ensure efficiency in order to scale up production.

“There’s a computer system that’s running the whole apparatus that makes sure you have the precise amount of flow and pressure. And that allowed us to get more production out. Even though this size is small, we were able to really scale this up our original design for this machine. We’re currently operating at four times the capacity.”

Part of what has allowed Pfizer to continue to make room for these new formulation suites has been its strategy of using prefabricated construction.

In its 1,300-acre foot Kalamazoo facility, Pfizer is installing around 13,000 square feet of modular rooms that are first built in Texas and then shipped to Kalamazoo.

“We’ve had planned to expand our formulation capacity. The question was, how can we do it quickly? If we built it wall by wall on site, it would have taken us a year. By doing it modularly, we could cut that in half,” says McDermott.

Moving each room into place is surprisingly easy. With the help of compressed air — think of an air hockey table — you can simply slide them into place. Then the rooms are ready to be connected to electricity, sterilized and put to use.

With each of these improvements, Pfizer says it has gone from producing 3 to 4 million doses of vaccine a week to 13 million doses a week. They company expects to double that again by the middle of the year. That will mean roughly 100 million doses a month and the ability to hit its goal of 300 million total doses delivered to the US government by July.

McDermott says the last 12 months have been “like nothing I’ve ever experienced in my career.”

“As a kid, my dad worked for NASA,” McDermott said. “He was lucky enough to be in mission control in Houston when Neil Armstrong stepped on the moon right at that amazing moment.

Then came December 13, 2020 — the day the United States’ first coronavirus vaccine, the first step to end the pandemic, left the facility.

“The day we shipped the first doses out of this site, it rushed over me like that was that was my moment,” McDermott said. “That was our moonshot.”

But McDermott says vaccine supply is always on his mind, and they have to prepare for the future — and that means coronavirus variants.

Although there is no evidence people immunized with Pfizer’s vaccine will be less protected against the current variants, the company has started testing a third dose of its current vaccine.

Pfizer and BioNTech say they are also in ongoing discussions with regulators about potentially testing a vaccine modified to protect against concerning variants in a Phase 1/2 study.

The company’s next giant leap is to be ready to get it to patients, if necessary.

Pfizer’s goal, McDermott says: To be able to develop a new variant-specific vaccine, get it through production and get it to patients within a matter of months.