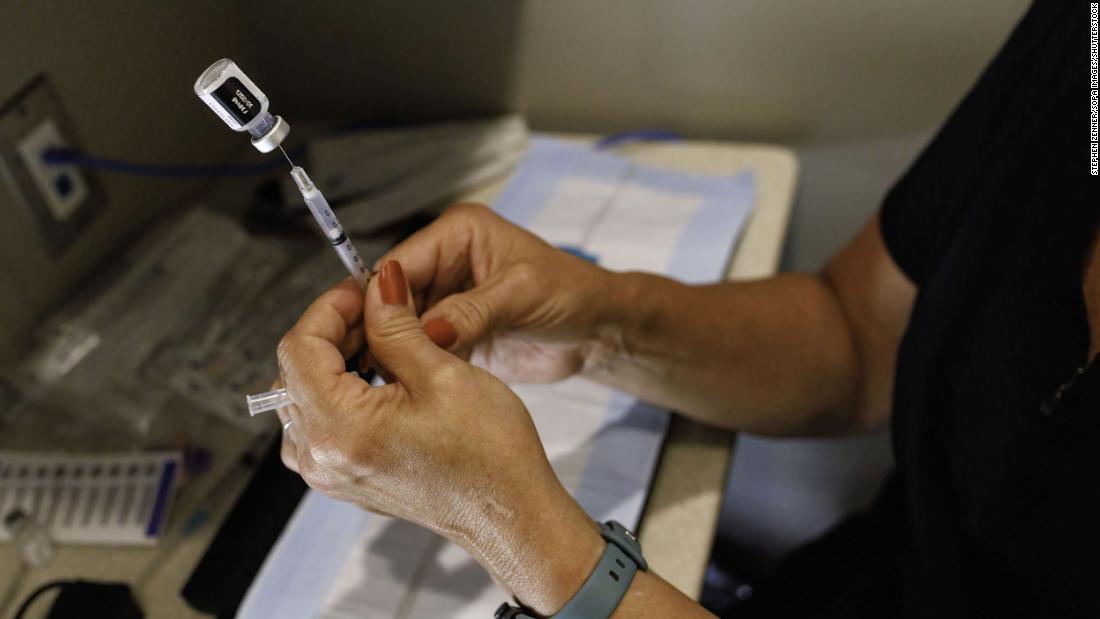 “The vaccine also continues to be available under emergency use authorization (EUA), including for individuals 12 through 15 years of age and for the administration of a third dose in certain immunocompromised individuals,” according to the FDA.

Out of more than 170 million people in the United States fully vaccinated against Covid-19, more than 92 million have received the Pfizer/BioNTech vaccine.

“While this and other vaccines have met the FDA’s rigorous scientific standards for emergency use authorization, as the first FDA approved Covid-19 vaccine, the public can be confident that this vaccine meets the FDA’s gold standard for safety, effectiveness and manufacturing quality that we require for an approved product,” FDA Acting Commissioner Dr. Janet Woodcock said during a briefing on Monday, calling the approval “a pivotal moment” for the United States’ fight against the coronavirus pandemic.

“Health care providers can continue to use the vaccine on their shelves,” Woodcock added. “The FDA-approved vaccine and the EUA-authorized vaccine have the same formulation and can be used interchangeably to provide the Covid-19 vaccine series.”

Agency official said Monday they hope approval will push unvaccinated people to get vaccinated. US Surgeon General Dr. Vivek Murthy said on CNN’s State of the Union on Sunday that approval could encourage individuals to act, and more mandates.

“For businesses and universities that have been thinking about putting vaccine requirements in place in order to create safer spaces for people to work and learn, I think that this move from the FDA, when it comes, will actually help them to move forward with those kinds of plans,” Murthy told CNN’s Brianna Keilar.

Murthy also noted “a small number of people” have been waiting for full approval before getting their shot and believes “this may tip them over toward getting vaccinated.”

Why emergency use authorization came first

Due to the seriousness of the pandemic, vaccine makers originally applied for emergency use authorizations because the authorization process takes less time than what’s required for full approval.

In July, drugmaker Pfizer announced that the FDA granted its vaccine a priority review, and the FDA had been pulling in extra help from across the agency to speed final approval of the vaccine.

The FDA worked around the clock and conducted its own analyses of the vaccine in addition to the companies’ analyses, Dr. Peter Marks, director of the FDA’s Center for Biologics Evaluation and Research, said during Monday’s briefing.

“We also did benefit-risk assessments based on real-world data that has emerged since the vaccine has now been used in hundreds of millions of people globally. And so that actually takes a lot of work,” Marks said, adding that the agency also inspected facilities that make the product.

Emergency use authorization is what its name suggests — a medical product, such as a vaccine, that gets special FDA authorization to be used during an emergency. When the health emergency is over, “then any EUA(s) issued based on that declaration will no longer remain in effect,” according to the FDA.
Among the two other coronavirus vaccines authorized for emergency use in the United States, Moderna has begun applying for full approval for its Covid-19 vaccine in people ages 18 and up. Johnson & Johnson has not yet filed for full FDA approval of its vaccine.

Some experts have pushed the FDA to approve vaccines quickly, as doing so could help combat vaccine hesitancy.

Full approval of the Covid-19 shots comes days after the Biden administration announced plans to offer booster doses to vaccinated adults starting September 20 — pending approval by the FDA and recommendation from the US Centers for Disease Control and Prevention.

Progressing from authorized to approved would allow manufacturers to market and directly distribute their vaccines — and perhaps sway skeptics hesitant to get the vaccines now.

A Kaiser Family Foundation survey of US adults released in July found that among the one-third of adults surveyed who are not yet vaccinated, 16% said the vaccine was too new, too unknown or not tested enough.
Some said in this poll that they wouldn’t get a vaccine until it is required. While companies are allowed to require the vaccine — and many large businesses, such as United Airlines, Disney, Walmart, Microsoft, Google and Facebook already have announced plans to do so — some experts believe more will make it a requirement once a vaccine is fully approved.
The Pentagon plans to make the vaccine mandatory for all active duty members of the US military by the middle of September, or sooner, based on approval timing, Secretary of Defense Lloyd Austin said in a memo released earlier this month.

“I want you to know that I will seek the President’s approval to make the vaccines mandatory no later than mid-September, or immediately upon the U.S. Food and Drug Administration (FDA) licensure, whichever comes first,” the memo states.

Full FDA approval may also mean big changes in terms of vaccine requirements for staff and students in schools.

For instance, in Ohio, a House bill signed into law in July states that a public school or state institution of higher education shall not “require an individual to receive a vaccine for which the United States Food and Drug Administration has not granted full approval.”

Across all 50 states, at least five routine childhood vaccines are generally required for children attending childcare or school, including those for diphtheria, pertussis, and tetanus or DTaP, chickenpox, poliio and MMR. But those shots have all been fully approved by the FDA.

“Covid-19 is a little bit different from these other vaccines because of the way it had to be developed,” Hemi Tewarson, executive director of the National Academy for State Health Policy, told CNN in July.

“That is a difference, I think, in some people’s minds who have concerns around potential side effects for children,” Tewarson said, noting that clinical trials for the EUA for children 12 and older were robust, and there were not significant side effects.

But full FDA approval of the Pfizer/BioNTech Covid-19 vaccine is for people age 16 and older — it’s not yet available for all ages.

What does approval mean for kids?

As of now, the Pfizer/BioNTech Covid-19 vaccine is still only available for ages 12 and older in the United States.

Pfizer has said it expects to have vaccine trial data on children ages 5 to 11 by the end of September, and the company could apply to have its vaccine authorized for those younger ages shortly after. The company also has said data for even younger children, ages 2 to 5, could be available shortly after.

Moderna and Johnson & Johnson are also working on studies in children.

Even though the FDA has approved the Pfizer/BioNtech Covid-19 vaccine for people age 16 and older, the agency emphasizes that this does not mean the vaccine can be used “off-label” in children younger than 12. Off-label refers to an approved product being used in a way or in a patient that it wasn’t necessarily approved for.

“We want to reiterate, it is important that the unvaccinated get vaccinated where it is indicated, but we do not have data on the proper dose nor do we have full data on the safety in children younger than what is in the EUA,” FDA’s Woodcock said during Monday’s briefing call.

“So that would be a great concern that people would vaccinate children because we don’t have the proper dose and we don’t have the safety data, nor do we have all the efficacy data, as well,” Woodcock said. “We are not recommending that children younger than age 12 be vaccinated with this vaccine. It would not be appropriate.”