Path ahead for pandemic could be shaped by masks while the US death toll inches closer to 100,000 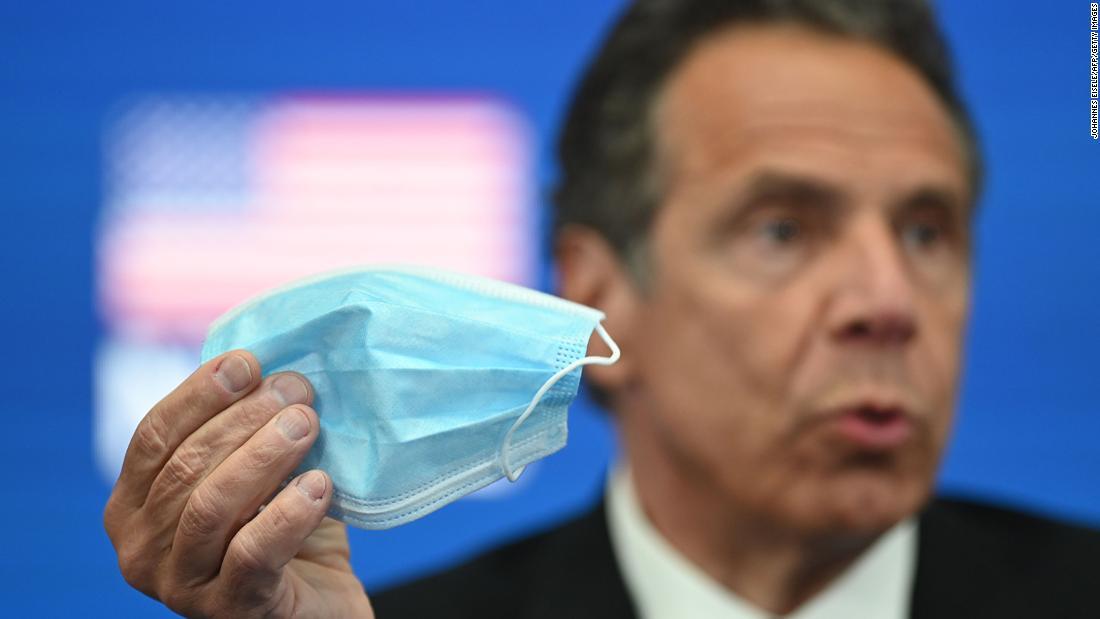 “We now have really clear evidence that wearing masks works — it’s probably a 50% protection against transmission,” Dr. Chris Murray, director of the Institute for Health Metrics and Evaluation (IHME) at the University of Washington, told CNN’s Anderson Cooper. “And so, what happens in the next month or two is very much in the hands of how people respond.”

At least 1,680,913 people have been infected with the virus nationally and 98,913 people have died, according to Johns Hopkins University. The IHME, which produces a coronavirus model that has been cited by the White House and is one of more than a dozen highlighted by the US Centers for Disease Control and Prevention, on Tuesday said the model projects fewer people will die in the United States by August than it had projected last week.

Behavioral changes like wearing masks could be responsible for the reduction, Murray said.

Many officials have urged their residents to wear masks. Former acting CDC director Dr. Richard Besser called it “an American thing to do,” and Ohio Gov. Mike DeWine told Cooper wearing a mask isn’t political, it’s “about loving your fellow human being.“

Still, warmer weather and a holiday weekend drew large crowds from their homes and into public spaces recently — many without any face coverings.

The decision to wear a mask or avoid one will determine what happens next in the pandemic, Murray said.

Wearing a mask to protect against the virus is not the only health guidance to be disregarded as places across the US reopen.

In Missouri, the “Show Me Strong Recovery Plan” for reopening requires social distancing when customers are using shared spaces in and outdoors and prohibits communal seating areas for multiple groups.

But a video of a Memorial Day party at the Lake of the Ozarks, Missouri, showed throngs of people packed in a pool and around bars.

The bar called it the launch of the “Zero Ducks Given Pool Party.” St. Louis County Executive Dr. Sam Page called it an “international example of bad judgment.”

Page also told CNN’s Brianna Keilar that it is too early for that type of congregating. Those who attended were asked to self-quarantine for 14 days.

“We are working very hard to get that message out that we can’t see, and we don’t want to see what we saw last weekend, and anyone that was involved in that needs to respect their community, respect the ones that they love, and isolate themselves in self-quarantine for two weeks,” Page said.

The bar said it will take extra precautions and safety measures to allow the event to continue.

How the infection numbers are trending

Illinois appears to be entering a “downward trend,” with the week ending May 16 being the first with a lower number of coronavirus deaths than the week before, Illinois Public Health Director Dr. Ngozi Ezike announced at a news conference Tuesday.

But the possible trend is still at its early stages, Ezike said, and the public has a responsibility to continue to decrease transmission.

New York, the hardest hit state for the virus, reported Monday that 73 residents died in a single day the lowest daily death toll since the start of the pandemic in the US, Gov. Andrew Cuomo said Tuesday.

But other regions do not have the same good news.

Mississippi Gov. Tate Reeves warned residents to stay vigilant in a news conference Tuesday because the state is still seeing a steady number of cases.

Meanwhile, Michigan Gov. Gretchen Whitmer said, despite pressure from the public and a decline in cases, the state is also not letting its guard down.

“Now, I’m not going to be bullied into ignoring the science and making political calculations,” Whitmer said. “Let’s not us here in Michigan have made this sacrifice in vain, and see our numbers start to rise again. … That means masks and distancing, and hand washing.”

Elsewhere, Washington DC, is on track to report 14 days of coronavirus decline Wednesday, a benchmark that has been cited for a safe reopening.

Every state has begun to reopen, lifting restrictions on businesses and public spaces often in phases specific to the needs of the area.

“We are walking into the unknown,” California Gov. Gavin Newsom said. The state was one of the first to impose restrictions and has been on the backend of lifting them.

More than 80% of counties in the state are allowed to begin the third of a four-phase reopening plan. This stage includes allowing hair salons and barbershops to reopen along with retail shops.

The state has reported 99,387 cases and 3,819 deaths, but hospitalizations have been declining slightly over the past two weeks, and the number of those in ICU beds remains stable, the governor said.

The state’s final phase of reopening includes resumption of concerts and spectator events, but Newsom says, “we are not there yet.”

Such large gatherings could soon resume in Florida, where Walt Disney World and Sea World will present reopening plans to the Orange County Economic Recovery Task Force Wednesday, according to an Orange County, Florida news release.

Tests could be wrong and danger could be higher

Many of these reopenings are contingent on testing and data showing that the transmission of the virus is low. But the accuracy of some tests has been called into question.

Antibody tests used to determine if people have been infected in the past with Covid-19 might be wrong up to half the time, the US Centers for Disease Control and Prevention said in new guidance posted on its website.

The tests that look for evidence of an immune response to infection are not accurate enough to make policy decisions, the CDC said.

And the numbers may even be confounded by tests for current illness.

Doctors are increasingly reporting that they cannot find evidence of the virus until they perform tests deep in the respiratory system. Many children have come into hosptials severely ill, but do not test positive until after repeated tests.

It is not only a problem for treating patients — it calls into question whether low reports in cases really means it is time to reopen workplaces and public spaces.