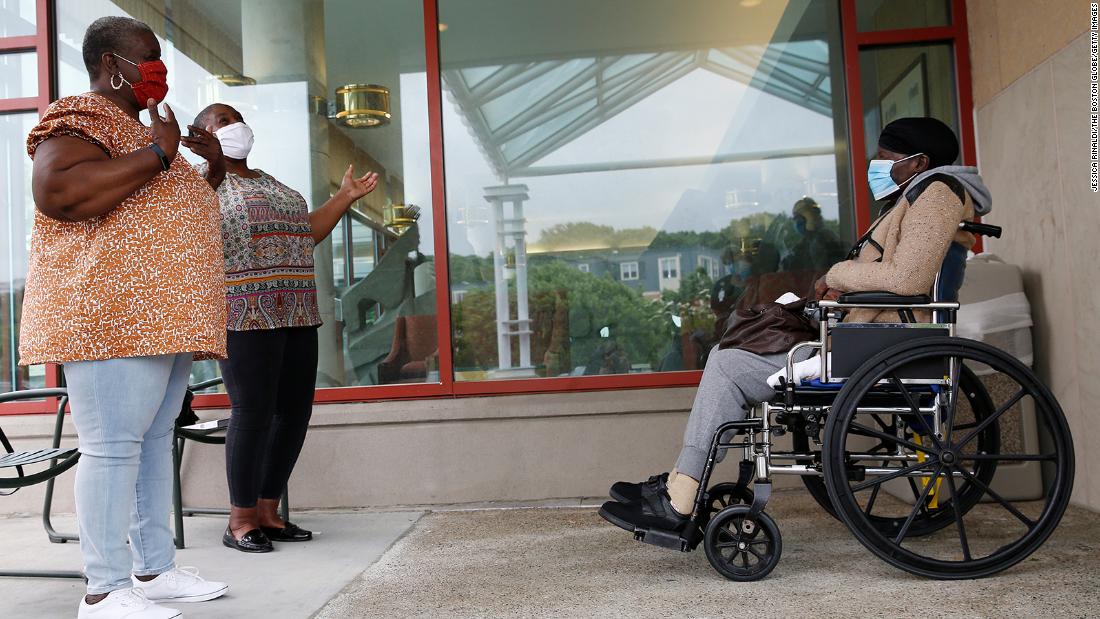 For the most part, visitors are required to stay outside and meet relatives in gardens or on patios where they stay at least 6 feet apart, supervised by a staff member. Appointments are scheduled in advance and masks are mandated. Only one or two visitors are permitted at a time.

Before these get-togethers, visitors get temperature checks and answer screening questions to assess their health. Hugs or other physical contact are not allowed. If residents or staff at a facility develop new cases of Covid-19, visitation is not permitted.

Visitation policies may change, however, if state officials become concerned about a rise in Covid-19 cases. And individual facilities are not obligated to open up to families, even when a state says they can do so.

Relaxing restrictions is not without risks. Frail older adults in long-term care are exceptionally vulnerable to Covid-19. According to various estimates, 40% to 45% of Covid-related deaths have occurred in these facilities.

But anguished families say loved ones are suffering too much, mentally and physically, after nearly four months in isolation. Since nursing homes and assisted living centers closed to visitors in mid-March, under guidance from federal health authorities, older adults have been mostly confined to their rooms, with minimal human interaction.

The goal was to protect residents from the coronavirus as the pandemic began to escalate. But the virus entered facilities nonetheless as staffers came and went. And now, families argue, the harms of isolation exceed potential benefits.

“My mother stopped eating around the middle of April — now she just picks at her food,” said Marlisa Mills of Asheville, North Carolina. “Every week, she becomes more delusional.” Mill’s mother, 95, has dementia and lives in a nearby nursing home that remains closed to visitors.

Residents “are dying of broken hearts and neglect,” said Lelia Sizemore, whose 84-year-old father’s health deteriorated precipitously after her mother stopped her daily visits to his Dayton, Ohio, nursing home in early March.

Diagnosed with severe dementia, blind and unable to feed himself, Sizemore’s father lost more than 10 pounds in two months and succumbed to respiratory failure on May 24. Even at the end, the nursing home refused her mother’s requests to see him in person.

“I didn’t even get to say goodbye,” sobbed Sizemore, who lives in Oregon and last saw her father in July 2019.

Ohio began allowing visitors at assisted living centers on June 8 and will permit outdoor get-togethers at nursing homes as of July 20.
New Jersey has the second-highest number of Covid deaths in the country. On June 19, the state’s health commissioner announced that all long-term care facilities could accept visitors outdoors — just in time for Father’s Day.

Broadway House for Continuing Care, a Newark facility, quickly notified families and arranged to pitch a tent with chairs and tables underneath in a garden area.

“It’s time to open things up some more: We’ve all been operating under a sense of being under house arrest,” said James Gonzalez, chief executive officer of Broadway House and chair of the board of the Health Care Association of New Jersey.

With weekly tests, 10 residents and 26 staffers at Broadway House have learned they had Covid-19. One resident has died since the outbreak began.

“Are we worried about visitors bringing the virus? Yes, but I think we can manage that,” Gonzalez said. “We’re going to have to take this day by day.”

On Father’s Day, Raul Lugo arrived at Broadway House to visit his grandmother, Rosa Perez, 89, who raised him after his mother died when he was an infant. He had not seen Perez, who had contracted Covid-19 and spent two months in the hospital, since the end of March. Because Perez is frail and it was extremely hot, they met in the facility’s vestibule.

“She told me she missed me and that she loves me. I told her I love her back,” said Lugo, a truck driver. “It was 1,000 times better seeing her in person than talking to her on the phone. You can’t compare it. It was awesome.”

Complete Care Management, which operates 16 nursing homes in New Jersey, opened all its facilities to visitors within a week of the announcement of the state’s new policy.

Complete Care asks visitors to sign consent forms indicating they understand the risks and will let staffers know if they become ill. No one is allowed to bring food or enter the buildings, even to use the restrooms. For the time being, get-togethers are short — no more than 15 minutes and no more than two visitors at a time.

“Really, the only burdensome part of it is having staff available to bring residents outside, wait with them and bring them back in,” said Efraim Siegfried, Complete Care’s chief executive officer. “If we do everything right, I don’t see a negative outcome. And to see how excited people are, how happy they are, it’s a beautiful thing.”

Before the pandemic, Patricia Tietjen, 72, visited her husband of 52 years, Robert, who has dementia, every day at Complete Care at Green Acres in Toms River, New Jersey. Though staffers tried to arrange FaceTime visits when the home closed to visitors, “it was hard because he was never awake — he started sleeping all the time — and he can’t speak anymore,” Tietjen said.

Robert became ill with Covid-19 in April. Although he survived that, he recently entered hospice care and Tietjen has twice been let into the facility because he is near the end of his life. “It was extremely emotional,” she said, breaking into tears.

Although federal guidance says visitors should be permitted inside long-term care facilities at the end of life, this is not happening as often as it should, said Lori Smetanka, executive director of the National Consumer Voice for Quality Long-Term Care, an advocacy group.

She wants family visitation policies to be mandatory, not optional. As it stands, facility administrators retain considerable discretion over when and whether to offer visits because states are issuing recommendations only.

Smetanka’s organization has also begun a campaign, Visitation Saves Lives, calling for one “essential support person” to be named for every nursing home or assisted living resident, not just those who are dying. This person should have the right to go into the facility as long as he or she wears personal protective equipment, follows infection control protocols and interacts only with his or her loved one.

Not doing so is “inhumane and cruel” punishment for more than 2 million people — most of them older adults — living in “solitary confinement conditions,” said Tony Chicotel, a staff attorney at California Advocates for Nursing Home Reform, a campaign partner.