No need to wipe down groceries or takeout, experts say, but do wash your hands 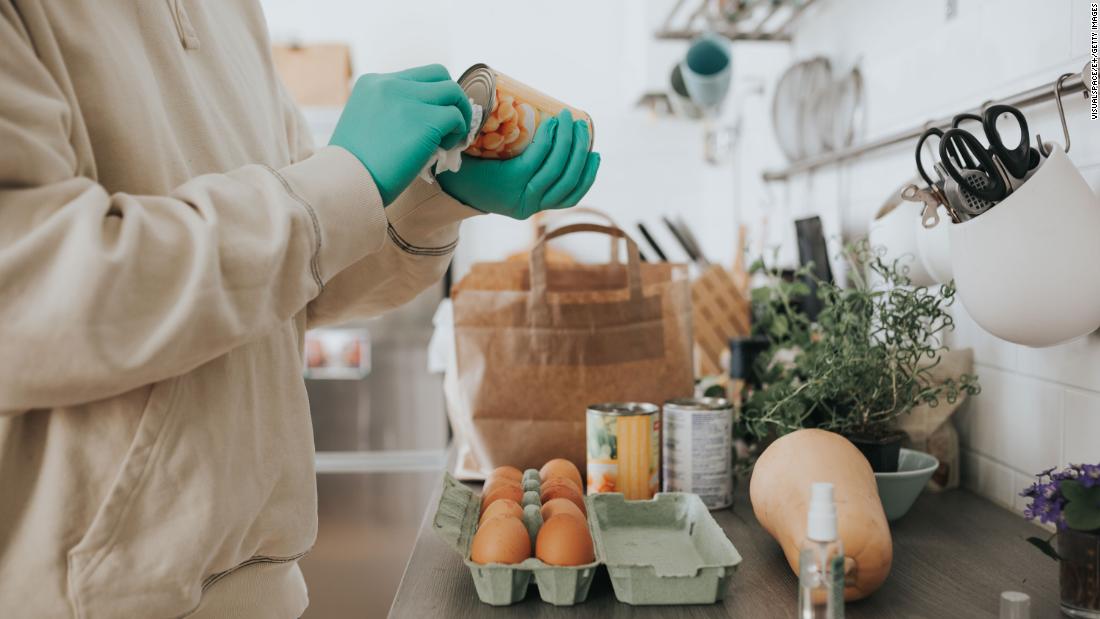 It might be time to reconsider, experts say, especially if that extra effort is adding to your daily stress. Even the US Food and Drug Administration (FDA) is re-emphasizing there’s no real risk of getting the virus that causes Covid-19 that way.

“We want to assure you there is currently NO evidence of human or animal food or food packaging being associated with transmission of the #COVID19,” the agency tweeted recently.

Jamie Lloyd-Smith is one of the scientists who worked on the only study to analyze how long SARS-CoV-2, the virus that causes Covid-19, might remain on various surfaces.

Despite the fact his research found the virus might live on cardboard for up to 24 hours and metal and plastic for two to three days, Lloyd-Smith doesn’t bother to wipe down his own groceries or takeout.

“I don’t, personally,” Lloyd-Wright said. “I treat my hands as potentially contaminated while I’m handling the groceries and unpacking them and I make sure that I wash them fully when I’m done with that process.”

Virologist Dr. John Williams, who has studied coronaviruses for decades, is also not overly concerned.

“Personally, we’re alternating cooking food at home and getting takeout food for a houseful of kids home from college right now,” Williams said. “And we’re not wiping down the containers from the restaurant.”

Because the odds of someone coming along and depositing enough virus on a grocery item or takeout container are pretty low, “I view it as sort of a hypothetical risk,” Lloyd-Smith said.

“So yes, I’m careful, I’ll wash my hands, but I don’t sort of regard it as glowing radioactively with virus.”

His advice might change, said Lloyd-Smith, if the person was at high risk from the virus, such as elderly or immunocompromised.

“One reasonable and easy-to-implement precaution for groceries that don’t need refrigeration is simply to let them sit for a day or more before unpacking them,” he said. “This will vastly reduce the level of any contamination that is present.”

How did we get so concerned about groceries?

The concern over virus transmission via surfaces began in late March after the study published in the prestigious New England Journal of Medicine.

“What the study showed is that under certain conditions in the laboratory, which are obviously kind of artificial, SARS-CoV-2 is detectable for up to three hours in aerosols, up to four hours on copper, up to 24 hours on cardboard and up to two to three days on plastic and stainless steel,” Lloyd-Smith said.

The experiment did not account for other factors that could help to inactivate the virus, such as sunlight or disinfectants or look at varying levels of virus, Lloyd-Smith said, so there’s no “magic” in the numbers they found.

Food safety expert Benjamin Chapman agreed. “There’s no magic number in this because temperature matters, humidity matters, how much virus was put there in the first place matters,” said Chapman, a professor in the department of agricultural and human sciences at North Carolina State University.

The amount of SARS-CoV-2 also diminished rather quickly over time, compared to say, a norovirus or “cruise-ship” intestinal virus, said Williams, who is chief of the division of pediatric infectious diseases at the University of Pittsburgh Medical Center Children’s Hospital of Pittsburgh.

“The cruise ship norovirus, however, can persist for many days in an environment on inanimate objects,” Williams added. “So you could be on a cruise and have norovirus and then your cruise finishes and I get on the next cruise in your cabin and I can get your norovirus.”

If you want to focus on something that makes a key difference every time, experts say, it’s much more important to become a fanatic about properly washing or sanitizing your hands after any potential encounter with coronavirus.

Instead of worrying about how long the virus will persist and spraying everything down or wiping it down with sanitizer, you can manage this “very unlikely route with low risk and make it even lower by just practicing proper good hand washing,” said Chapman, “or using hand sanitizer once you’ve returned home from the grocery store or gotten takeout food.

“I don’t want to discount this conversation or people’s fears, but it’s almost like it doesn’t matter much as long as everyone is washing their hands,” Chapman added.

If you are still really nervous about your risk of contamination by food products, then by all means use disinfectant wipes on the outside of containers, Williams said.

“Some people want to wear a belt and suspenders to hold their pants up, right?” Williams said.

“So if people are concerned about virus transmission from groceries or take out food, just carefully remove the inside containers of food from the outer bag, throw away the outer bag and then use a little hand gel or soap and water.

“But still, the odds of getting the virus that way are very, very low,” Williams added.