No added sugar for babies, US advisory panel recommends, as it tackles birth to age 2 feeding advice for first time 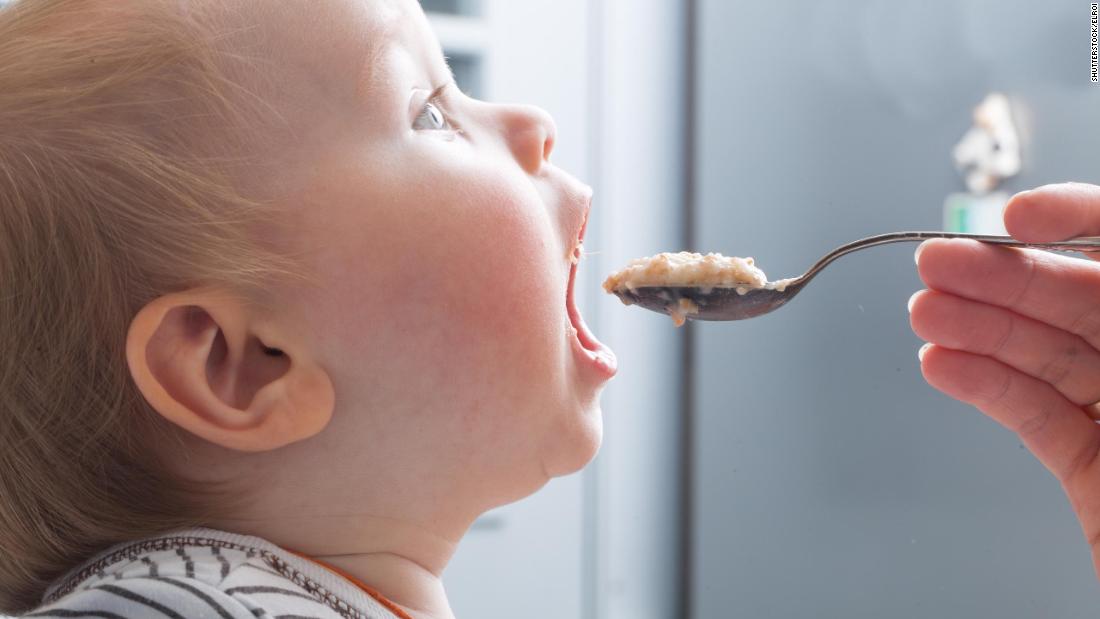 “This report continues the traditional emphasis on individuals ages 2 years and older and, for the first time, expands upon it to reflect the growing body of evidence about appropriate nutrition during the earliest stages of life,” the report stated.

“Nutritional exposures during the first 1,000 days of life not only contribute to long-term health but also help shape taste preferences and food choices.”

Released Wednesday, these final recommendations are sent to the US Department of Health and Human Services and the US Department of Agriculture, which use them to create the final 2020 to 2025 dietary guidelines that dictate much of what Americans will eat over the next five years.

So how did this committee do, considering all the challenges of a short time frame, Covid-19 logistics and the need to add recommendations for the first two years of life?

“This is an impressive, solid, conservative review of the existing science highly consistent with previous Dietary Guidelines but with mostly stronger recommendations,” Nestle said.

“At the outset, I was concerned that the committee members might be heavily biased in favor of food industry interests, she added. “If they were, such biases do not show up in the final report. I think this committee deserves much praise for producing a report of this quality under these circumstances.”

No added sugar at all

One key message in the 2020 infant recommendations: No amount of added sugar is OK for a baby’s development.

“Avoid foods and beverages with added sugars during the first 2 years of life,” the committee stated. “The energy in such products is likely to displace energy from nutrient-dense foods, increasing the risk of nutrient inadequacies.

“Moreover, consumption of sugar-sweetened beverages is linked with increased risk of overweight or obesity.”

Added sugars are used in processed foods and beverages to sweeten, and differ from the natural sugars that are part of a piece of fruit or glass of milk.

“Apples and oranges all contain sugar but they also provide fiber and overall nutrition,” said pediatrician Dr. Steven Abrams, who chairs the American Academy of Pediatrics committee on nutrition.

“Mother’s milk has sugar in it,” Abrams said, but it’s packed full of immune boosting, infection fighting components and is the perfect combination of fats, proteins, carbohydrates and vitamins for a baby’s needs.

However, while 100% fruit juice may appear to offer the same nutritional benefit as whole fruit, in reality it does not, according to the AAP.

“Fruit juice, especially for kids in the first year of life, is a source of sugar without many nutrient benefits,” Abrams said. “So this should always be avoided.”

Then between 1 and 3 years of age, kids should drink no more than 4 ounces per day of 100% fruit juice, the AAP suggests.

The committee found that “nearly 70 percent of added sugars intake comes from five food categories: sweetened beverages, desserts and sweet snacks, coffee and tea (with their additions), candy and sugars, and breakfast cereals and bars.”

Parents should avoid added sugar in a child’s diet, the committee recommends, because of the strong link to childhood obesity and future chronic health conditions.

Yet prior research has found that on average, infants consume a teaspoon of added sugar a day while toddlers consume about 6 teaspoons a day.

“Every bite matters, which I think is a really good motto,” said Abrams, who directs the Dell Pediatric Research Institute at the University of Texas at Austin. “I like that a lot because it reminds you that what you’re feeding the baby really does make a difference.”

What about older children and adults? The committee dropped the recommended amount of added sugar from 10% of daily calories to 6% — for an adult on a 2,000 calorie per day diet that means that less than 120 calories should come from added sugar each day.

To put that into perspective, one can of sugar-sweetened soda is about 150 calories.

Breast milk contains healthy micronutrients important to a baby’s development that can, for the most part, be influenced by a woman’s diet and supplement use.

In their working draft, the committee found rapid weight gain was more likely among formula-fed infants than breastfed infants, possibly due to higher protein intake with formula or overfeeding by the caregiver so as not to “waste” food.

Don’t start first foods for baby before 4 months of age, the committee said. Research shows doing so is associated with an increased risk of obesity at 2 to 12 years. That appeared to be especially true for infants who are formula fed, as they may not be able to regulate their feelings of “fullness” as well as breastfed infants.

The committee also encouraged women to more closely adhere to healthy eating recommendations before and during pregnancy.

“Though the diets of women who are pregnant or lactating are higher in key food groups, they still fall below recommendations,” the report said. “The risk of chronic disease begins early in life, with important health consequences for the fetus based on the dietary intake of the mother and subsequent feeding behaviors in infancy and early childhood.”

Eating fish high in omega-3 fatty acids is a key benefit for both pregnant women and newborns, the committee found. It may be related to reduced risk of gestational diabetes and hypertensive disorders during pregnancy, while also reducing risk of preterm birth.

Eating at least 8 to 12 ounces each week of a variety of seafood high in omega-3 and low in methlymercury — such as crab, oysters, salmon, sardines, scallops, shrimp, squid and tilapia — may also boost cognitive development and language and communication development in children.

Possible areas of nutritional concern in baby’s development revolve around iron, zinc and vitamin D. Because breast milk doesn’t contain adequate amounts of vitamin D unless the mother is supplementing at high levels, the committee followed the AAP’s guidelines: Give fully and partially breastfed babies 400 IU of vitamin D from birth until the baby is weaned and drinking vitamin D-fortified cow’s milk or infant formula.

There’s no need to go above that level, the committee said: “The existing body of evidence does not provide a basis for recommending vitamin D supplementation above 400 IU per day during infancy.”

Iron is important for “normal neurological development and immune function,” the committee said, adding that studies show that both iron and zinc decline in breastfed infants by six months.

Therefore, parents of breastfed babies should feed foods like meat that are rich in iron and zinc during the second six months of life, or fortify with iron-enriched foods such as infant cereals.

Be careful, however, since too much iron can also be harmful. Formula-fed babies may get a double dose of iron if they are eating cereals as well. The committee does not recommend iron supplements for babies, unless they are screened by a doctor and found to be deficient.

It’s also important to give baby adequate amounts of polyunsaturated fatty acids, the committee recommended, because of the important role they play in brain development. Key sources are fish, fish oil, vegetable oil, nuts and seeds.

The committee also found introducing peanuts and eggs, “in an age appropriate form,” after 4 months of age may reduce the risk of food allergy to these foods. While the evidence wasn’t as strong for other allergens such as nuts and seafood, there was also no harm in introducing such potentially allergic foods.

Here’s a shocker for men who drink: The committee is suggesting reducing current guidance for two drinks for men and one drink a day for women.

“Recommended limits for both men and women who drink would be 1 drink per day on days when alcohol is consumed,” the report said.

Research has indicated higher average alcohol consumption is associated with an increased risk of all-cause mortality, so “those who do not drink should not begin to drink because they believe alcohol would make them healthier.”

What’s missing from this analysis? The committee didn’t tackle the topic of red meat — a major supplier of saturated fat in the American diet and a huge player in the argument over food sustainability and environmental impact.

Sodium and salt and their role in the growing epidemic of hypertension and heart disease was also not part of the committee’s assignment. “The report says remarkably little about sodium beyond that it is overconsumed and people should ‘reduce sodium intake,'” Nestle said.

The committee didn’t address drinking water over other beverages for hydration. Nor did they touch on the need to limit the American fascination with overly processed foods that lose nutritional value as their shelf life expands.

“Ultraprocessed” is the new way of talking about foods that should not be consumed regularly or in large amounts — tons of evidence has come in within the last five years,” Nestle said.

“The word does not appear in the report except in the references,” Nestle said. “If the committee considered this evidence, it did not spell it out explicitly.”

Those issues aren’t addressed, critics say, because the independence of the 2020 Dietary Advisory Committee was removed by the federal government.

“For the first time in the 40-year history of the Dietary Guidelines, the agencies — USDA and HHS — set the scientific agenda, not the committee,” Nestle said.

While we don’t know if the committee would have considered other topics, “sustainability, meat, sodium, and ultraprocessed foods are the hot nutrition topics these days and getting the committee’s take on these issues would have been a big help,” Nestle said.

Clarification: An earlier version of this story characterized the advisory committee’s proposed plan as guidelines.