NASA-SpaceX launches will boost science research on the space station 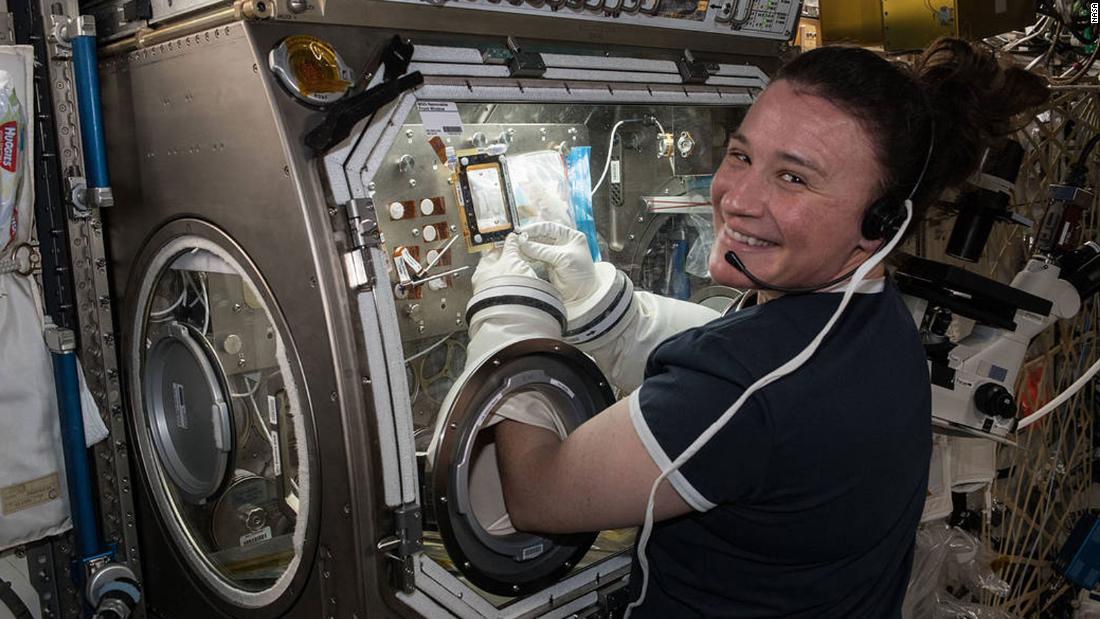 “I was stunned, in a good way, at the high quality of the science,” she told CNN. During her time on the space station, Auñón-Chancellor worked on hundreds of experiments across a variety of sciences, including biology, biotechnology, physical science and Earth science.

As a practicing physician, as well as clinical associate professor of medicine at Louisiana State University Health New Orleans School of Medicine’s branch campus in Baton Rouge, she could see the real-world applications of the medical experiments on the station.

“I could picture a patient with each of these experiments,” she said. “It’s tremendously enlightening and heartwarming because a good portion of the life sciences research on the space station is for people on Earth, not for astronauts who will go to Mars.”

She and her fellow astronauts also installed a new Life Sciences Glovebox suited for biological research, which also allows two astronauts to simultaneously interact with the experiment inside.

Auñón-Chancellor said that astronauts tend to have an eight-hour workday on the space station, and much of that is dominated by science experiments. She could spend as much as four hours on one experiment alone while the other astronauts worked on different experiments, she said.

From the time construction began on the space station in 1998 until now, nearly 3,000 different experiments have been conducted on the station.

More than 4,000 scientists have had their work represented on the station, with those scientists and research stemming from 108 countries globally, according to NASA.

Now, NASA’s Commercial Crew program can expand the amount of astronauts on the space station — which means that more science, and even new types of experiments, can happen in the unique microgravity environment.

The United States hasn’t launched its own astronauts into space since the Space Shuttle Program ended in 2011. Since then, NASA’s astronauts have had to travel to Russia and train on the country’s Soyuz spacecraft.

This mission, called Demo-2, is just the beginning of launching astronauts from American soil for stays of varying lengths on the space station. That means more scientific experiments in space that can help us out on Earth, as well as astronauts who may be going to the moon or eventually, to Mars.

The majority of the science that has occurred on the space station has taken place over the last 10 years — the 10 years prior were spent building and outfitting it to be a laboratory orbiting the Earth.

While the astronauts also work on maintaining the space station, exercising, working with robotics and preparing for and executing spacewalks outside the station, the majority of each day is spent on science, Auñón-Chancellor said.

National labs on Earth tend to focus on one kind of science.

“We focus on what we can offer that is unique, which is withholding gravity as a variable,” said NASA astronaut Christina Koch, who returned to Earth in February. “The space environment affords a wide spectrum of discovery.”

One of the many experiments Koch worked on during her record-breaking stay of 328 days on the space station involved protein crystal growth. Understanding those proteins could lead to pharmaceuticals that can fight cancer.

Some of these crystallized proteins can’t form on Earth, while others don’t form as well. However, they grow well in the station’s microgravity environment, often larger and more well-ordered than crystals grown on Earth, which allows them to be studied more in depth. Crystals grown on the space station have a variety of applications across different sciences and technologies.

Two decades of research on the space station has allowed scientists to realize the potential of eliminating gravity as a factor from their experiments.

For example, 3D structures form better in the absence of gravity because Earth’s gravity can pull on those structures and flatten them out, said Jennifer Buchli, the space station’s deputy chief scientist. This includes 3D bioprinting on the space station. In recent years, the US National Institutes of Health has partnered with the ISS National Lab to fly tissue chip experiments on the station.

They’re physiological systems on something the size of a USB stick that can be used to test drug efficiency and model patients, Buchli said.

Other experiments in recent years include investigations about growing plants in space, slowing down atoms so they can be studied in the Cold Atom Lab, testing building supplies for the moon and studying how fire reacts in space.

The experiments vary in how much interaction they require from the crew on the space station. Some are self sufficient, only requiring occasional interaction by an astronaut, while others are much more hands on.

“Science is a time-intensive task and the crew members are our hands, eyes and ears to complete a lot of science,” Buchli said.

But the basic fact remains that more people on the space station means more science can be achieved because the amount of crew has been a limiting factor. With Commercial Crew, four NASA astronauts can go up at one time, rather than the three astronauts and Russian cosmonauts that can fit in the Soyuz.

“Commercial Crew can also launch more frequently and bring the woman and manpower to get it done,” Auñón-Chancellor said. “The science is up there, it’s just waiting for us to complete it.”

“When we have four US crew members, we can double the number of hours devoted to science each week and accomplish science that wasn’t previously feasible in a crew day,” Buchli said. “That means more than 100 hours per week can be spent on science in the future.”

This means that astronauts could either double up on experiments by working together or split into shift teams where they stagger when the astronauts are awake and asleep, so crews could hand off an experiment that requires 13 hours rather than six — especially an issue in life sciences, cell biology and rodent research.

Commercial Crew also expands the flexibility for transporting things to and from the station, she said. The Soyuz launches occur about every six months, while Commercial Crew vehicles will allow them to launch and land with varying lengths of time on station.

That means more live refrigerated samples and cells grown and tested on the space station can be returned exactly when they need to be for scientists to study them on the ground and detail how they changed in space.

More repeats of science experiments can also occur. If a research team is granted a second flight of an experiment, they can repeat it to gather additional data.

“You don’t just run an experiment once on the ground,” Buchli said. “You refine things as you go. This is exciting because the space station is starting to function more like a ground lab, allowing repetition and the chance to optimize and tweak science.”

More frequent flights means that astronauts can also experience missions of shorter duration, which can fill a crucial gap when it comes to monitoring astronaut health. These missions would last between two to three months.

Current astronaut health data has been taken from those who went up on shuttle flights, which lasted between 10 and 18 days, average space station missions lasting six months, and a few extended missions that were closer to a year, like astronauts Scott Kelly, Peggy Whitson and Christina Koch.

It also means that extended stays are possible to prepare for the long flight to Mars.

This will allow NASA and their Human Research Program to better study the effects of space on human health and develop countermeasures to mitigate them — especially as they prepare to send astronauts back to the moon and eventually on to Mars.

The future of science in space

Non-NASA research is managed by the ISS National Laboratory, which utilizes the space station’s unique microgravity environment to send up experiments from commercial businesses, academic institutions and government agencies that can benefit Earth.

During his time with the ISS National Lab, Chief Operating Officer Ken Shields has enjoyed watching the variety of both experiments and their investigators as they “push the envelope of existing technologies.”

“We’re breaking barriers in the world of research development and technology,” Shields told CNN. “And we’re entering a new era in space research and development.”

The space station is like a test kitchen to experiment and prove out concepts, he said.

A small scale of success on the space station may mean that an investigation could later be moved to another low-Earth orbit vehicle. Multiple commercial research and development partners have been running a portion of their business in space through installations on the space station, and the technology advancements gained in space can help Earth.

“The International Space Station is an unmatched tool of inspiration and engagement,” he said.

Some of the science conducted on the space station actually stems from student experiments. Seeing their research happen in space will inspire future generations, he said. Going forward, the ISS National Lab wants to make sure that all students, especially those in underrepresented demographics, have the opportunity.

The last 20 years saw the building and completion of the space station, as well as research and development of science and technology experiments in space to provide people with applicable innovations on Earth.

Shields saw nothing but opportunities ahead.

“I’m hopeful that we can continue to enable and facilitate more groundbreaking efforts that have importance not only to individual academic institutions or companies, but are more broadly felt to create solutions to problems that are important to us as a nation,” Shields said.

Jackie Wattles contributed to this story.