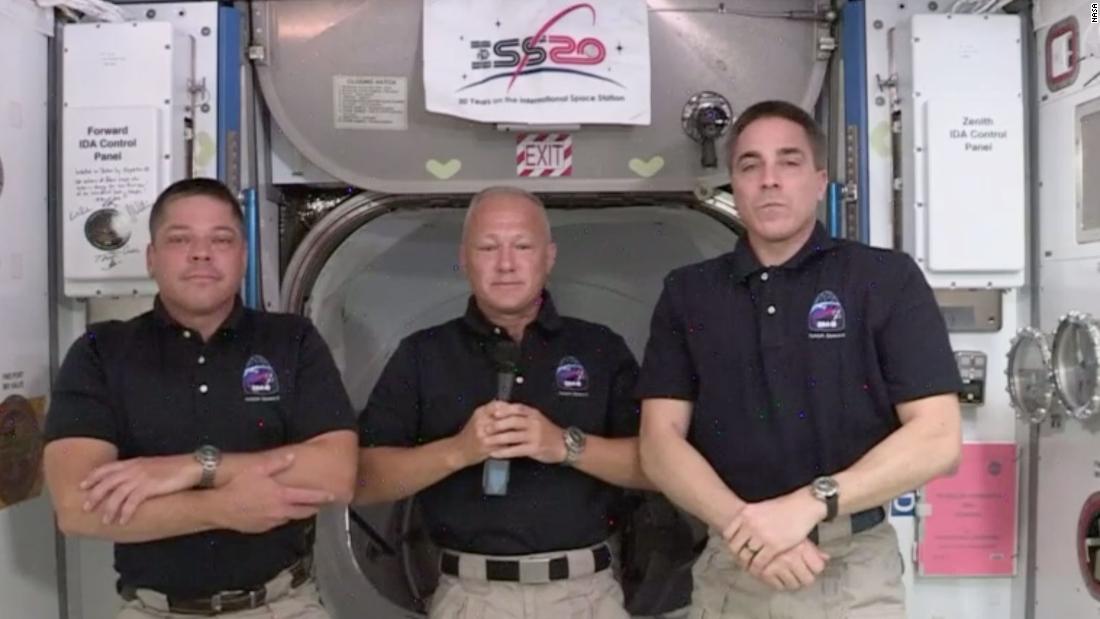 “When the hatch opened, you could tell it was a new vehicle,” said NASA astronaut Chris Cassidy, who welcomed the new residents to the International Space Station. “It was wonderful to see my friends and a brand-new vehicle.” Cassidy has been on board the station since April.

Cassidy, along with newly arrived NASA astronauts Bob Behnken and Doug Hurley, participated in a press conference on the International Space Station Monday.

The event took place two days after the historic NASA-SpaceX launch that sent Behnken and Hurley to the station and one day after they docked and were welcomed aboard by Cassidy and Russian cosmonauts Anatoly Ivanishin and Ivan Vagner.

This mission, called Demo-2, served as a way to test out Endeavour so more NASA astronauts can travel to the space station by launching from US soil for varied lengths of time.

Cassidy said that his new crewmates have already hit the ground running on day one, and soon, they’ll be working on science experiments together. “The three of us are pretty excited to get after it together.”

“This was an extremely long road for Bob and I,” Hurley said. “We last flew in 2010 and 2011. NASA stopped flying shuttles in the middle of 2011. It took hard work and dedication the last nine years to get us where we are now, launching rockets from the US. It’s been a really rough couple of months, so to be able to show the country what the agency is made of, what Commercial Crew and SpaceX did, I hope they take some pride and sense of accomplishment from that.”

Upon arriving on the space station, Hurley and Behnken “captured the flag.” The flag was left on the space station during NASA’s final shuttle mission, STS-135, which included Hurley, with the intention that it would be captured by the next crew to launch from the US.

“Chris had it right on the hatch right where we left it nine years ago,” Hurley said, holding the flag.

Cassidy placed a note on the flag that said, “Do not forget to take with Crew Dragon.”

Depending on how long Behnken and Hurley stay on the space station, which could be anywhere between one to four months, “you can bet we will take it with us when we depart back to Earth,” Hurley said.

Testing out the new vehicle

Behnken and Hurley both commented on their experience with the launch, the performance of the vehicle and how they felt wearing their tailored spacesuits as test pilots.

“The suits were custom designed and fitted to us, so they were very comfortable and much easier to get in and out of in zero G,” Hurley said. “We complimented the suit team. Those things worked very well.”

Both discussed that compared to their time on the shuttle, the first stage of the flight was smoother on Endeavour. But the second stage was a little rougher than the shuttle and their expectations. During that second stage, both astronauts made sure to verbalize their experience to ensure that they were noticing the same things.

When the first stage engine shut off, it took almost a second between the booster separating and the Merlin Vacuum engine to start, which caused a change in g-forces experienced by the astronauts. They went from three Gs to zero G for half a second. Then, when the Merlin Vacuum engine fired, they began accelerating again for five to six minutes to achieve orbit.

The vehicle performed as they expected and docking was so smooth that they didn’t even feel it, the astronauts said.

The spacecraft will continue to undergo testing as it remains docked with the station, Behnken said. This will enable them to see how it handles an extended period exposed to space. They’ve also spent some time to see if it could be used as a lifeboat, or emergency departure vehicle, if they needed to leave the space station for any reason.

“We’ll put Dragon through its paces for the Crew-1 flight,” Behnken said.

After this spacecraft undergoes weeks of safety and technical reviews and is deemed “operational,” another Crew Dragon spacecraft must be designated as ready for the next mission. This mission is known as Crew-1, and it will carry four more astronauts to the space station: NASA astronauts Victor Glover, Jr., Michael Hopkins, Shannon Walker and Japan’s Soichi Noguchi.

The astronauts didn’t reflect on the historic nature of their flight between launching and docking. Their mission, which is far from over, is noting all of the things they learned about the spacecraft so far. More of that will continue when they complete their time on the station, undock, depart, re-enter Earth’s atmosphere and land.

It’s uncertain as to when Behnken and Hurley will return, which Behnken had to explain to his 6-year-old son — although apparently “he’s just excited because we’re getting a dog when I get home,” Behnken said with a chuckle.

“One of the things I was most excited about was being able to make a phone call home,” Behnken said. “It’s been a long time since I launched, and I have a little boy who got to watch me do it for the first time. I wanted to learn about his experience, watching that, while it was still fresh in his mind. It was wonderful for me.”