Mothers are still doing most of the parenting during a pandemic 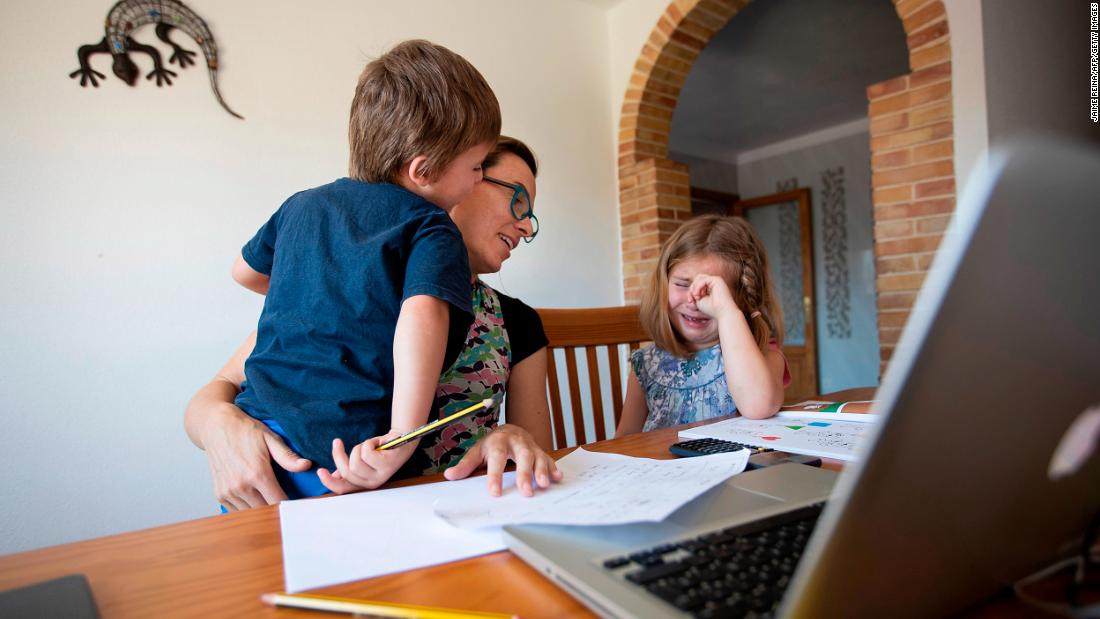 10:10: She gets logged out of her online learning program and needs help logging back in.

10:12: Elder daughter asks why her sister has a snack and she doesn’t.

And on it goes. Most of these requests are addressed to me even though my husband is also working from home and we’ve taken turns “running interference” in two-hour slots while the kids are off school.

Parenting these past few months has been immensely hard for both mothers and fathers, with the pandemic putting unprecedented demands on families around the world. But as we mark UN Global Day of Parents on June 1, it’s clear that it’s moms that are doing most of the heavy lifting and may ultimately end up paying the biggest price.
Mothers are only able to do one hour of uninterrupted work for every three hours done by dads, according to new research from the United Kingdom that also found mothers taking on more chores and spending more time with children in homes where there is both a working mother and father.

Before lockdown in the UK, mothers completed on average around 60% of the uninterrupted work hours that fathers did. That’s now diminished to a third.

“I was most surprised by the extent to which the gap has grown between men and women in terms of high quality work hours,” said Alison Andrew, a senior research economist from the Institute for Fiscal Studies which, along with University College London, interviewed 3,500 families for its report.
The trend appears to be similar in the United States, with a report from April indicating that women spend more time than men in the typical working day on homeschooling and childcare. Another survey for The New York Times suggested that while men claimed to do at least 50% of the homeschooling but only 3% of women agreed with their partners.

Anita Bullock-Morley is one mother struggling to find those uninterrupted working hours.

Her solution is to get up at 5 a.m. each morning in order to have the time she needs to set up a virtual summer camp business. That’s because her in-person work as a speech pathologist in Atlanta has dried up as a result of the pandemic.

Her husband, an essential worker, is still working outside the home and has added extra hours to make up for her lost income.

“I was getting all taxed trying to do my work so then I’m getting frustrated with the kids and, I’m like, they’re just kids — how do I change this? I have to get my ass out of bed so I can be productive. The hour I had in the evening to watch a show or chill with my husband is gone. I need to get to bed. “

As a family they were used to relying on outside help for food prep and cleaning. Now just as Bullock-Morley is managing family life solo, it’s become a much bigger job.

“I’m the one who’s preparing three meals, two snacks a day for everybody, and feeding all of the animals,” Bullock-Morley said. “The kids’ rooms are way more messy than they’ve ever been. The laundry pile is way bigger. I leave dishes in the sink. I’m a type A. Those things I never did before.”

“It’s not the fault of anyone,” she said. “(My husband) doesn’t just sit on the couch when he gets home but he’s just not physically here most of the time.”

Equally challenging, she said, is the emotional labor, the worry work, that often falls to women. That emotional labor has been heightened during the pandemic by the confusing and contradictory ways restrictions are beginning to lift in some places.

“I have to choose where and how and who we playdate with and if we do. What happens when we travel, go to the grocery store?” she said. “The kids are anxious [and ask] can I hug my grandpa? Can I hug my cousins? These are big conversations and they take a lot out of you. There’s so much unknown,” she said.

While financial considerations mean that Bullock-Morley has to take on the greater share of chores, childcare and homeschool for now, Andrew from the Institute for Fiscal Studies said that wasn’t the “whole story,” according to her research.

“If we look at the couples with the female partner earning more, she’s still taking on the bulk of the childcare. It’s doesn’t all seem to explained by straightforward financial considerations,” Andrew said.

“There’s a lot of [ingrained] habits and attitudes that evolve slowly. In households where mum does a lot more childcare and when childcare demands suddenly increase, that old habit remains in terms of who picks up the [slack],” she said.

For those women who’ve lost their jobs and cut back their hours, she warned that the lockdown could lead to a further increase in the gender wage gap. “It’s hitting women harder. They are stepping away from the workforce and it could be hard for them to re-enter.”

And those moms who find their work is undermined by the lack of uninterrupted, productive time could see their career prospects take a hit, making them seem less committed to their jobs or less able to cope with their workloads than their male colleagues.

The only households where mothers and fathers are sharing childcare and housework equally are those in which both parents were previously working but the father has now stopped working for pay while the mother is still doing paid work, according to the IFS research,

However, mothers in these households are doing paid work during an average of five hours a day in addition to doing the same amount of domestic work as their partner.

“The vast increase in the amount of childcare that mothers are doing under lockdown, which many are juggling alongside paid work, is likely to put a strain on their well-being,” said Lucy Kraftman, a research economist at IFS and a coauthor of the report.

It wasn’t meant to be this way.

The hope, according to some pundits, was the pandemic would be a wake-up call. Stuck at home, men would realize the emotional and domestic burden many women shoulder in the home and step up, shaking up gender dynamics and eroding social norms in a way we’d not seen since World War II.

Titan Alon, an assistant professor of economics at the University of California San Diego, is still optimistic the pandemic could be a game changer for working moms and said we need more data to have a “sharper picture of the shifts that have occurred.”

“Our optimism stems from the way childcare needs have been forced to the forefront of the national consciousness and two big trends that have emerged from that,” he said.

“First, because of the closure of schools and daycare, businesses can no longer ignore the childcare needs of their employees. Many companies are making big investments in flexible work arrangements that will allow couples to better coordinate childcare and (hopefully) remove the need for one spouse to sacrifice career goals to focus on childcare,” he said.

“Second, we see many families in which, due to the nature of the shutdown, husbands will be forced to take on a larger share of childcare responsibilities in the short run,” he added.

For instance, think of families where the wife is a doctor or nurse, and the husband is a telecommuting office worker, Alon said. “These shifts, the longer they persist, will accelerate the demise of old notions that men are unable or inadequate at providing childcare.”

The IFS report isn’t totally at odds with Alon’s perspective. It found that fathers are now, on average doing childcare during nearly twice as many hours as in 2014 and 2015. It’s just that women are doing it during an average of 10.3 hours of the day (2.3 hours more than fathers).

Marzena Zoladz, a mother of two boys aged 8 and 6 in London, has worked full-time in her job as an operations manager in the health and social care sector during the pandemic. While she’s put in nine hour days from her flat, her husband, who was furloughed from his job, has taken on the lion’s share of childcare and household chores.

It’s a been a reversal of their usual roles and one that’s largely worked well for them during the crisis.

“During my working time he does 95% of the work, I chip in during lunch or if there’s a dispute I help out,” said Zoladz.

“I feel lucky but there are different tensions. He telling me ‘I’m doing this and that.’ Stuff I’ve always been doing but I’ve not been bragging about,” she said.

She’s not sure whether it will have a lasting impact on their family life once the scramble of doctor’s visits, school pickups and drop-offs resume.

“He finds it difficult doing full-time childcare. I’m sure he’s enjoyed bonding a bit more with the kids and being out and about with them most afternoons, but he did say he can’t wait for normality to return.”