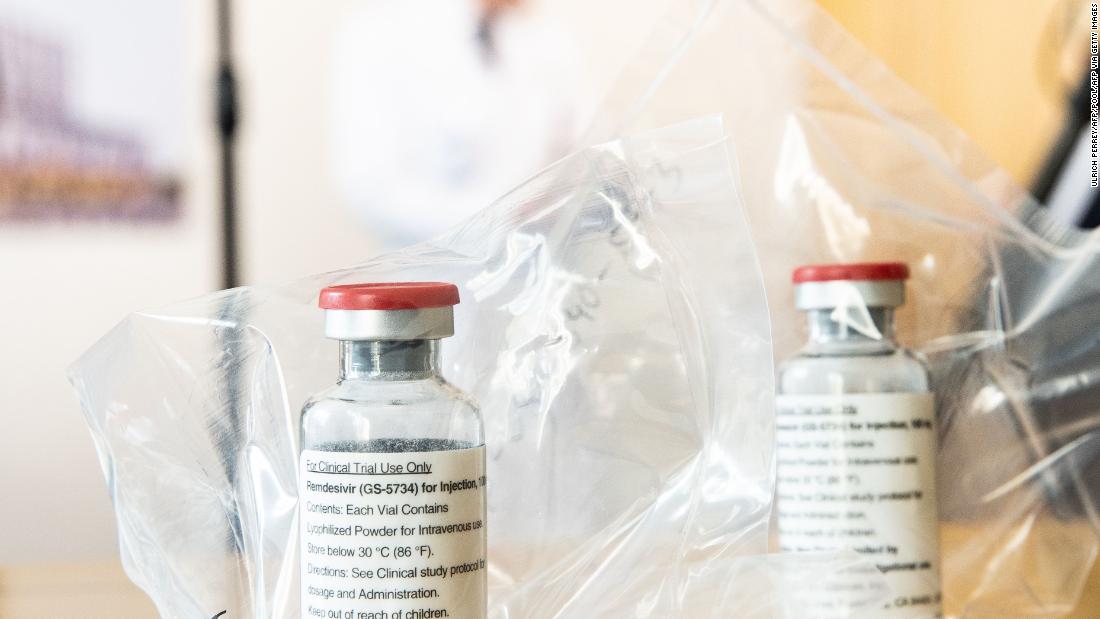 It’s more evidence that the drug can help patients, however outside experts are not calling this a “game changer” quite yet.

Coronavirus patients who were hospitalized, but not sick enough to need oxygen from a ventilator, were more likely to recover after a five-day course of remdesivir than those given the current standard of care alone, Gilead said.

The results from the Phase III clinical trial on the drug have not yet been published in a peer-reviewed medical journal. Gilead said it plans to submit the full data for publication in the coming weeks.

Gilead originally studied remdesivir as a potential treatment for Ebola, but lab experiments suggested it might be active against coronavirus.

The US Food and Drug Administration has not approved any treatment for Covid-19 — but in early May, the FDA issued an emergency use authorization for remdesivir for use as a treatment for the sickest hospitalized Covid-19 patients.

Remdesivir is approved to treat Covid-19 in Japan, but is considered an investigational treatment for Covid-19 elsewhere in the world, Gilead noted.

“With the additional data we have in hand today, we will continue to pursue research opportunities to evaluate patient outcomes and potentially benefit more patients with remdesivir,” Parsey said.

“These include extending treatment earlier in the course of disease, combination studies with other therapies for the most critically ill patients, pediatric studies and the development of alternate formulations,” Parsey said. “We will continue to share emerging data with regulatory authorities as we work together to help address the needs of patients around the world.”

Some improvement with five-day course of treatment, early data suggest

The most common side effects of remdesivir in the study were nausea, diarrhea and headaches.

“If we can intervene earlier in the disease process with a five day treatment course, we can significantly improve clinical outcomes for these patients,” Dr. Francisco Marty, an infectious disease physician at Brigham and Women’s Hospital and associate professor of medicine at Harvard Medical School, who worked on the trial, said in Gilead’s press release.
When asked on Twitter on Monday why the data for a 10-day course looked no better than the standard of care, Marty responded that it “could be a toxicity that plays out with the longer dosing” or “a fluke of open-label design & physician behavior, where clinicians go longer for sicker patients.”

‘These improvements are not dramatic’ and ‘not a game changer’

The improvements were not dramatic, Stephen Evans, professor of pharmacoepidemiology at the London School of Hygiene & Tropical Medicine in the United Kingdom, said in a written statement released by the UK-based Science Media Centre on Monday.

“The data show that there is only a small difference between the groups in improvement,” Evans said.

“These improvements are not dramatic – they are not a ‘game changer’ in the terrible jargon, but at least there is some genuine evidence of improvement. For the patients it is good news that few died, but the evidence therefore that remdesivir improves mortality in these patients is uncertain and limited,” Evans added.

“Remdesivir is one of the only drugs to show some promise, but the benefits are not large and we need to have more transparent data before we can form a good judgment.”

Last month, the New England Journal of Medicine published results from a different remdesivir study evaluating the drug in patients who were hospitalized with severe Covid-19, including those on mechanical ventilation.

That data showed the drug shortened the course of illness from an average of 15 days to about 11. The researchers, led by a team at the National Institute of Allergy and Infectious Diseases, added that “given high mortality despite the use of remdesivir, it is clear that treatment with an antiviral drug alone is not likely to be sufficient.”