Mississippi’s governor just mandated masks in public gatherings and school. The state is top 5 for coronavirus cases per capita 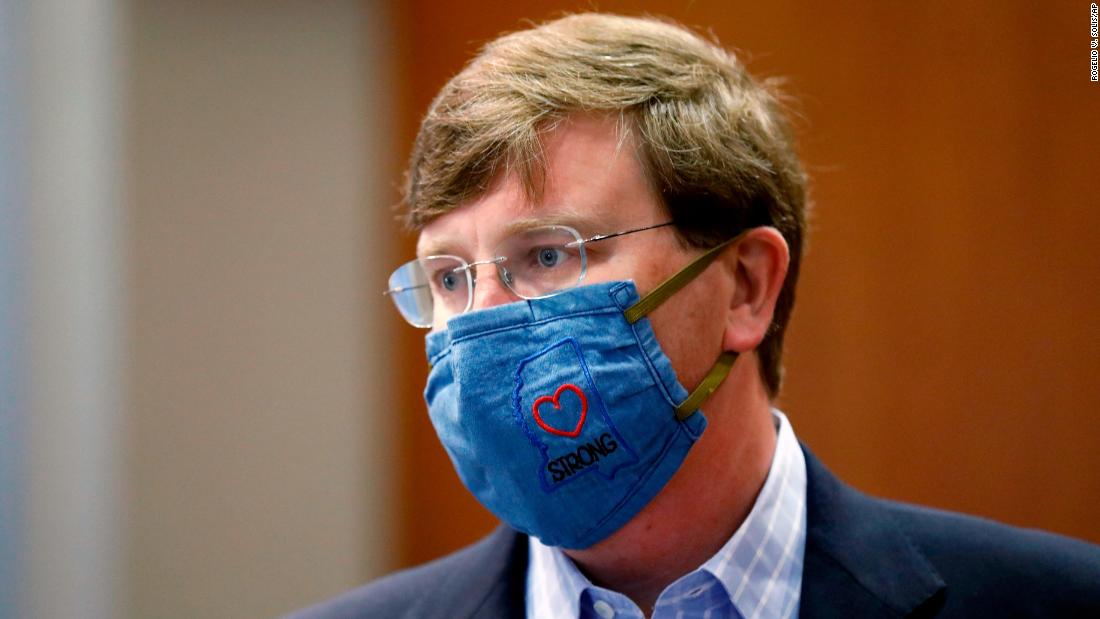 Gov. Tate Reeves announced new measures — a face-covering mandate in all counties for public gatherings and retail settings for the next two weeks.

Also, all adults and kids in schools must wear masks, unless there is a medical reason not to.

“I (had) taken a piecemeal approach (to masks) because I believe firmly that this was the best way to get the most number of people to participate,” Reeves told reporters Tuesday.

“I believe that there is enough motivation (now) to safely get our kids in school that we can really juice the participation of mask wearing throughout our state for the next two weeks,” he said.

There appears to be a lot of virus to tamp down. After the state lifted its safer-at-home order June 1, new daily case counts rose from about 400 in late June to above 1,200 by early August, JHU data show.
Daily case numbers have dipped in recent days. But deaths rates have climbed, from an average of roughly 10 daily in early June to above 30 per day now. Mississippi’s 1,753 deaths ranks it 10th among US states in deaths per 100,000 people.
And hospitals in the state’s largest city, Jackson, are filling up. Health experts say it makes for a daunting combination in Mississippi, one of the poorest and most unhealthy states in the country. The state is tied for highest in self-reported adult obesity, and has the highest and third-highest death rates for hypertension and heart disease, respectively, according to the CDC.
Health officials have said having certain other illnesses, such as diabetes, high blood pressure and heart disease, increases the risk for more severe Covid-19 illness.

The high positivity rate is concerning “because it mirrors the health disparities that you already have in the state,” said Dr. Marinelle Payton, chair of the department of epidemiology and biostatistics at Jackson State University’s school of public health.

“Taking something like Covid-19, compounded with all the other health problems that you have in the state, that’s what makes it so devastating,” said Payton, also a former physician and epidemiologist at Harvard.

‘I worry about the fatigue … in our health care workforce’

Hospitals, especially in Jackson, are struggling to keep up, officials say.

“Right now, we (Mississippi) are having our surge,” Dr. LouAnn Woodward, the top executive and an emergency room physician at the University of Mississippi Medical Center in Jackson.

“For us to get where we are, I think in part that reflects the rural nature of the state. But now we are seeing community spread in all corners of the state, including our most rural areas.”

Daily hospitalizations have risen, from about 700 at any given time in mid-June to more than 1,100 now, according to the Covid Tracking Project.

As of Monday, the state said 161 of its 899 ICU beds were available.
But the situation was more dire in Jackson, the state’s largest city, where just over a handful of adult ICU beds were free, and most hospitals had none available, according to state health department data.

Coronavirus patients account for only some of those ICU beds — but they take away space that otherwise is needed for other maladies, Woodward said.

As recently as July 24, state health officer Dr. Thomas Dobbs said some patients were flown to Georgia for medical care because none of the state’s nine major medical hospitals had available ICU beds.

“We’re seeing a lot of stress within the health care system,” Dobbs said Tuesday. “So please stay safe and try to prevent the spread of the coronavirus for everyone’s sake.”

Woodward said her colleagues are exhausted. She pointed to an interview that one of her colleagues, Dr. Risa Moriarity, gave to the Jackson Free Press last month.

While discussing some people’s refusal to wear masks in public, she said, wearily, according to the Free Press: “Please don’t make this worse for us.”

Mississippi ranks near the bottom for physicians per capita, Woodward told CNN this week.

“(Battling coronavirus) is very taxing, it’s exhausting, and there’s no relief team in sight,” Woodward said. “I worry about the fatigue and the weariness in our health care workforce in the state of Mississippi.”

A push to reopen schools

As for schools, Reeves is encouraging them to open for in-person learning if local officials feel they can, with guidance and caveats including giving every family an option for remote learning.

On Tuesday, he said that in eight counties with high case counts, schools for grades 7-12 must delay opening until at least August 17. He cited studies showing that older children may spread the disease more readily that younger ones.

Dobbs announced another order Tuesday: People in Mississippi who are diagnosed with the virus must isolate for 14 days, with violations punishable by a fine or up to five years in jail.
The state has issued other restrictions in recent weeks. Social gatherings are limited to 10 people indoors and 20 outdoors; gyms, retailers, restaurants and bars are limited to 50% capacity, and bars must serve only seated customers.
Reeves cited CDC guidance that pushed hard for schools to reopen, arguing the harm of closing schools and potentially harming kids’ development may outweigh the harm of opening schools and allowing more virus spread.
That CDC guidance did caution that if a community had substantial virus transmission, officials should consider keeping schools closed. CDC Director Dr. Robert Redfield later said that included counties with positivity rates of higher than 5%.
White House coronavirus task force coordinator Dr. Deborah Birx has said test positivity rate is the statistic she watches the closest, because it is “the most sensitive indicator” of how the coronavirus situation is unfolding at any particular time and place.

Reeves said he was optimistic that people in the 37 counties that had mask mandates before Tuesday were increasingly wearing face coverings and that case numbers will go down.

“With a two-week push (of a statewide mask mandate), I believe we can have the maximum effect and allow for our education for our kids to occur,” Reeves said.

Dobbs asked that the public skip social events this month, to give schools and businesses a fighting chance for normalcy.

“If we can all just chill out for the next two to three weeks, consistent with the mask mandate,” he said. “We are undermining our ability to start school and keep businesses open because we want to have dinner with our friends who come in from out of town.”

‘We need a uniform response by the state’

Payton, the Jackson State University professor, warned that because many in the state are underprivileged, a significant portion of Mississippi’s populace may be vulnerable to the worst of Covid-19.

About 19.8% of the state’s population lived in poverty as of 2018, according to the US government.

“How are you going to tell someone who lives way up in the Delta” to have hand sanitizers and take certain other precautions “when they can’t even afford it?” she asked.

“You (often) have several generations of families living in one house. It’s very difficult to socially distance when you have several people in one home,” she said.

In Jackson, where more than 80% of the population is Black, Mayor Chokwe Lumumba points to data and studies showing Covid-19 disproportionately affects African Americans, in part because they have more existing medical issues.
As of Saturday, 53.9% of people who tested positive for coronavirus in the state were African Americans, according to the Mississippi State Department of Health. About 37.8% of the state’s population is Black or African American alone, the US Census Bureau says.
Lumumba, a Democrat, has criticized the state’s Republican-led administration for allowing businesses to reopen as soon as they did. He has issued orders in his city that have been more restrictive than the state’s, such as ordering indoor bars in the city to close, according to CNN affiliate WLBT.

“We need a uniform response by the state,” he told CNN Wednesday.