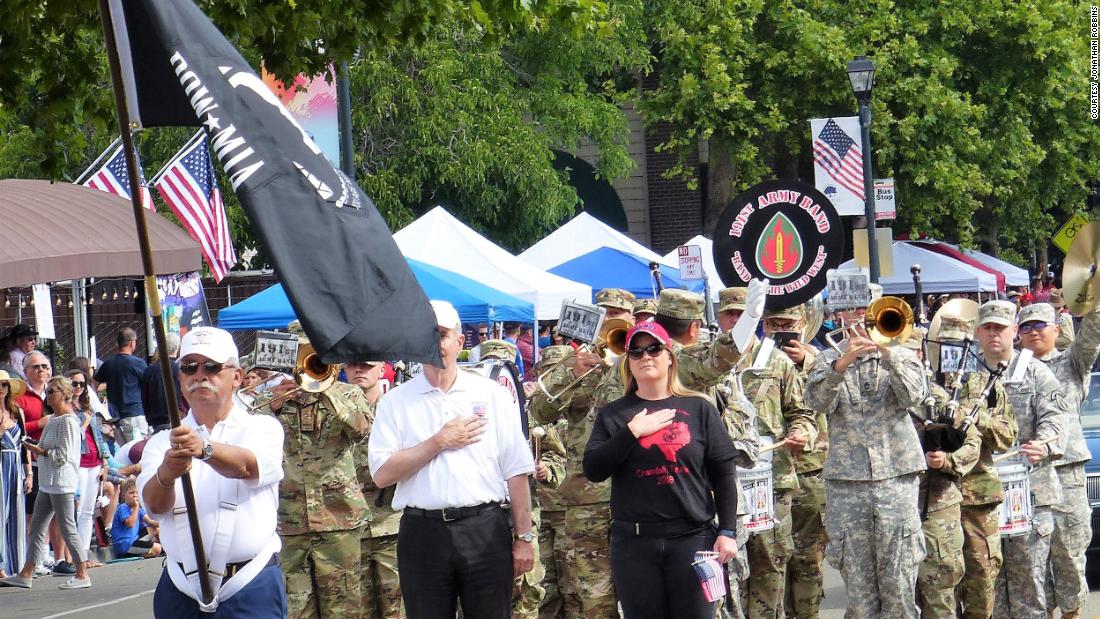 A Purple Heart recipient, Vargas has endured over 200 medical procedures since his return from Iraq.

“There’s just some sounds you’ll never forget, like the sound of 5.56 and 7.62 rounds impacting all around you,” said Vargas, now the manager for the Veterans Educational Transition Services Office and Veterans Resource Center at City College in San Francisco.

“The sound waves of fireworks are so triggering to many veterans,” Vargas said. “The impact of the emotional distress spills out into our lives, causing flashbacks and anger. We check and re-check our locks and stay up all night.”

While the Fourth of July can be likened to one of America’s biggest street parties — at least in pre-pandemic times — our celebration of the sacrifices made by our nation’s warriors can cause intensely painful trauma reactions for some who fight our wars.

That’s why the military community has a love-hate relationship with fireworks. That is, many either love them, or hate them, depending on their past experiences … and sometimes, they love and hate them at the same time.

For Vargas and others, the trauma reaction caused by fireworks may last many years, even decades, in some cases. At some level, it seems wrong to honor the sacrifice of our warriors in a way that can cause them emotional pain.

Could displays of fireworks be a bit like the elites who picnicked during the Civil War — five miles from the danger, watching the bloodshed as though it were just sport? Yet, like many things, the relationship between stimulus and response is complicated and variable.

Fireworks can also trigger memories of peak life experiences in the military. They include:

The “rush” of being in combat. Those who serve in the military are trained to fight. That is their job. They excel at it and they love doing it. Major Scott Huesing, the author of “Echo in Ramadi,” reflects this truth. As he went to war, he recalled that “deep inside, I was excited to go because I was finally getting what every US Marine is trained for — war.”

Self-sacrificial love. The trust between those who would give their lives for each other defies description. The closest description I’ve heard has come from the award-winning documentary films of Sebastian Junger. In the movie “Korengal,” US Army Specialist Miguel Cortes said this: “We’re closer than a family would be. … I would throw myself on a grenade, and the guys know that I would, without hesitation.”

Fireworks can become linked to a range of positive feelings and experiences.

Fireworks fill US Navy veteran Mike Slattengren, who served in the Vietnam War, with patriotic feelings. “I remember seeing tracers at night-time when I was in Vietnam, and it was a good memory,” said Slattengren. “Fireworks remind me of this — they make me feel happy.”

Slattengren noted that he served in a Naval Air Station, away from the intensity of close-range combat. “I think it was different for those who were in the jungles of Vietnam in infantry roles,” he said.

For other veterans, it’s complicated

Our nation’s warfighters leave the military with a complicated array of feelings as well as altered identities, with negative and positive experiences often intermixed.

“I find myself craving what I sometimes couldn’t wait to get away from,” one veteran told me for my book. “It bonds with your DNA, and there is no shaking it. Would I change it? Not a thing. Taking lives, losing friends, sharing the fear and exhilaration, suffering through the heat and boredom, missing family and holidays. It makes me who I am, and I love it. All of it … on some level.”

For many of our nation’s warfighters, the sacred is bound up with the pain. For example, several veterans have told me they did not want to stop having nightmares because this gives them continued connection with fallen brothers.

US Army infantry veteran Bill Green, who also served in Vietnam, has a complicated relationship with fireworks. He said, “If fireworks suddenly go off around me, even after 52 years, I still don’t like it.”

At the same time, fireworks are also tied up with a peak life experience for Green. “It was the 4th of July, 1968, in Vietnam. We were up on a hill … dug in for the night. As soon as it got dark, you knew where all the Americans were. They shot off every flare they had. We loved it. It brought us home for a moment that 4th of July night in Vietnam.”

Think about our veterans

Ultimately, fireworks can affect people in different ways. It’s worth considering whether our plans for celebrating Fourth of July are likely to trigger past trauma for us or our veteran family, friends and neighbors — or make us (and them) feel more empowered.

However we celebrate, this Fourth of July, could we also quietly take action to do something in support of those who risk it all to protect us? They are our nation’s service members, veterans, first responders and health care workers on the front lines of the Covid crisis.

Do the fireworks matter? Maybe not. This holiday is a good time to remind ourselves that we live out our values through our actions — caring for our veterans and our first responders on the front lines.

Whether fireworks are a part of this or not, perhaps we can celebrate Fourth of July by reaffirming through our actions that we can be one nation, with justice and liberty for all.