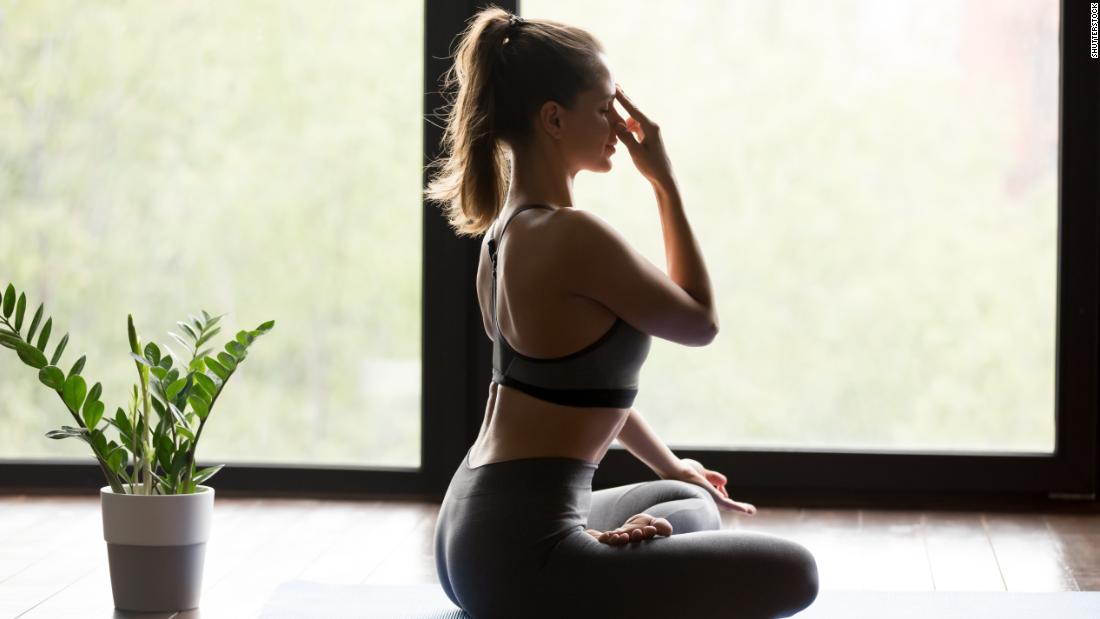 The most common trigger for migraines is stress. Because yoga is a gentle exercise that influences both body and mind, it’s been found to be effective in managing symptoms of this often debilitating condition.

Though medications are the first resort for treatment, only about half of migraine patients find luck with them, the study reported. For some people, medications cause negative side effects or don’t completely take away the pain, said Andrew Russo, who holds two professorships at the University of Iowa — one in molecular physiology and biophysics and another in neurology. He was not involved in the study.

Trials of previous studies lasted only about a month, or didn’t specify the yoga type, duration or timing, the report said. Given these circumstances, authors at the All India Institute of Medical Sciences (AIIMS) in New Delhi, India, studied the effectiveness of yoga in tandem with medications for people with migraines.

After a three-month yoga intervention, the participants who practiced a specific yoga module in addition to taking medications had more success in reducing migraine intensity, frequency and the amount of medication they had to take in comparison to the medication-only group.

“Yoga brings down stress, and stress is a precipitant for migraine,” said coauthor Dr. Gautam Sharma, a cardiology professor and head of the Centre for Integrative Medicine and Research (part of AIIMS). “It’s improving the mood, decreasing depression. It’s acting like one of the anti-anxiety medicines, and all of these medicines are used for migraine.”

At AIIMS, participants were counseled for 10 minutes on lifestyle changes including sleep, meals, mental relaxation and an exercise schedule.

All patients were given a headache log book and asked to make daily entries about how long their headaches lasted, pain score, any associated sickness, area of the headache, any triggering activities or events and medications and their effects.

A total of 114 people were split between two groups; one took medication only while the other added a standardized yoga module to their treatment plan. In the yoga group, participants followed the regimen for three days per week for one month at AIIMS, led by a qualified yoga therapist under the supervision of doctors who integrate yoga into medical practice.

For the next two months, they followed the program five days a week at home with the help of a guidebook of the yoga module. Whether they kept up with the program was tracked by a twice-monthly phone call from the yoga center and a daily log the participants were asked to maintain.

Though the yoga group had more headaches at the beginning of the intervention, after three months their headache frequency, intensity, pill intake and scores on the Headache Impact Test and Migraine Disability Assessment questionnaire all had higher rates and speed of improvement in comparison to the medication-only group. Both tests evaluate how people’s migraines impact their daily lives.

More than 12% of the people in the yoga group became headache-free at the end of the intervention, in comparison to none in the medication-only group. By the same time, they reduced their average pill intake by more than 47%.

“I thought it was a very clever design to do [the study] with the medication because all too often we see Western versus Eastern or holistic medicine, and it shouldn’t be viewed as such,” Russo said. “[It] showed that they’re complementary. It’s a fallacy to think Eastern or yoga-type therapies, mindfulness-type therapies that are more holistic and pill versions don’t involve the same nervous system.”

And their MIDAS scores, the test assessing how migraine influences a person’s everyday life, fell by more than 37%.

Causes of migraine include depression, anxiety, exhaustion, muscle tension and sensory overload. But the most consistent trigger shown to be occurring with the condition is stress, Russo said.

The researchers think yoga could work for alleviating migraine for a number of reasons connected to physical, biochemical, psychological and neurological health.

Yoga reduces activity of the sympathetic nervous system, which controls the body’s involuntary response to stressful situations, increasing heart rate and alertness and sending extra blood to the muscles, Sharma said. Less sympathetic nervous system drive equals less stress, while more parasympathetic activity leads to a state of calm, which is central to yoga practice.
Practicing yoga may reduce migraine attacks by also improving nitric oxide levels, which the body produces to relax the blood vessels, increasing blood flow and lowering blood pressure, according to a 2015 study the researchers cited.
Yoga may help people with migraine by lessening the tension in the area of pain or where the pain stems from — such as the head, neck and shoulders — and loosening stiff muscles. Tight muscles hold stress, which can trigger migraines.
Another study found mindfulness-based stress-reduction techniques, which are similar to yoga, had positive results among people with migraine. The participants of that study also lowered their MIDAS and HIT scores and had similar results for headache intensity and frequency.
The authors of the current study also cited evidence that meditations and yoga postures influence regions of the brain.
Exercise has been observed to have therapeutic effects on migraine, but it also triggers the pain of them by releasing proteins and other substances that cause intense inflammation in the brain or compensate for insufficient oxygen.

“Yoga may differ in this regard from other forms of physical activity as yogic postures are performed slowly and gently along with breathing exercises, relaxation exercises and pranayama,” which may prevent an increase in those levels, the current study said.

“I think migraine occurs when there’s a departure from homeostasis or, in other words, when there’s an imbalance in the body,” Russo said. “What we think the medications are doing, such as blocking [that protein]; apparently with yoga you’re restoring that balance by reducing stress.”

Yoga can be a cost-free, practical option for migraine treatment. But yoga is more than just exercise, Sharma said — it’s “exercise plus.”

The breathing, relaxation and mindfulness techniques in the module helped participants go beyond the exercise component, into a “deep meditation [that] can be viewed as a spiritual practice as well,” Sharma said.

“The yoga that we know of is just the tip of the iceberg,” Sharma added, “and the more you practice, the deeper you go, the more benefit that you derive from yoga.”

People with migraine who want to try this yoga method should talk with their doctor about using it to supplement their treatment. They should also ask whether there are any reasons the practice could be harmful for them, Sharma said. Learning with a yoga therapist is ideal before venturing out on your own, but the module is for beginners.

The study’s module started with prayer and breathing and meditation exercises. Next on the list were instant relaxation techniques. Then, sukshma vyayama, physical exercises to warm up the body. Quick relaxation techniques followed, in which patients observe their abdominal muscles while breathing. Next, a series of asanas, or physical techniques.
The meditation practice yoga nidra in savasana pose, or deep relaxation techniques, helped to relax the body toward the end of the practice.
The module concluded with pranayama exercises and poses, to control the breath and cool down. Pranayama means to extend vital energy beyond one’s normal limitations, as the root word, “prana,” means life force, while “ayama” denotes expansion.

Further studies with follow-ups, different locations and yoga practice without medication are needed to determine the long-term benefits of yoga for migraine relief. But integrating yoga into treatment would help patients and their doctors move toward overall wellness rather than just curing the pain, Sharma said.