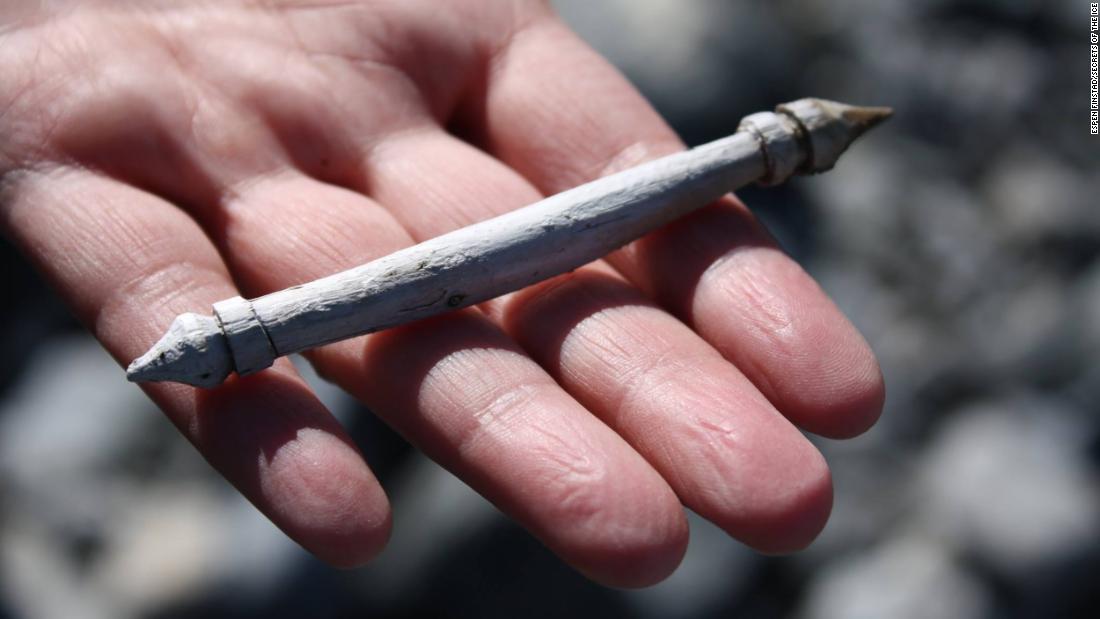 Researchers first discovered the pass in 2011 and have been examining it, and the artifacts that have been revealed as more ice melts, ever since. Dating the objects helped them reconstruct the timeline of when this pass was used and its purpose.

The new study published this week in the journal Antiquity.

In recent years, climate change has caused mountain glaciers to melt away, revealing well-preserved markers from different periods in history beneath. This is what happened in Lendbreen, Norway.

“A lost mountain pass melting out of the ice is a dream discovery for us glacial archaeologists,” said Lars Pilø in a statement. He is the study author and co-director of the Glacier Archaeology Program. “In such passes, past travelers left behind lots of artefacts, frozen in time by the ice. These incredibly well-preserved artefacts of organic materials have great historical value.”

The researchers believe the pass was used from the Roman Iron Age in 300 AD to the Viking Age in 1000 AD.

Horseshoes; a horse snowshoe; the bones of packhorses; sled fragments; and a walking stick inscribed with runes all reveal the transportation used on the pass. Other objects discarded along the way include a knife and its wooden handle; a birchbark container; a wooden needle; tinderbox; a wooden whisk; and a distaff, a tool that was used to hold wool as it was spun by hand.

Some of the most remarkable items include blue textile rags, a Viking mitten, shoes and a complete Roman Iron Age tunic.

And some items can’t be identified yet because the researchers have nothing to compare them to.

Frozen for all this time, some of the items appear almost new.

“The preservation of the objects emerging from the ice is just stunning,” said Espen Finstad, study co-author and co-director of the Glacier Archaeology Program, in a statement. “It is like they were lost a short time ago, not centuries or millennia ago.”

Sixty of the items have been dated so far. Based on the ages the items provided, the researchers believe that local traffic used the pass to access summer dairy and livestock farms located in higher elevations. They found small wooden bits, likely used for goats, and leaf fodder stripped from trees that could be used as a dietary supplement for livestock during winter.

It was also a travel and trade route, transporting goods like antlers and pelts outside of Norway.

Passage was likely easiest between late winter and early summer when snow covered the rough terrain.

Cairns, or piles of stones built by humans, were used to mark the route. They also found evidence of a permanent shelter on the pass. The pass was used for 700 years.

“The start around AD 300 was a time when local settlement activity was picking up,” said James H. Barrett, study co-author and program partner, in a statement. “When the use of the pass intensified around AD 1000, during the Viking Age, it was a time of increased mobility, political centralisation and growing trade and urbanisation in Northern Europe.”

Eventually, use of the pass decreased.

Fieldwork has been conducted at the site since 2011, but this study only includes the discoveries made up through 2015. The researchers said more ice has melted since then, with a large amount lost in 2019.

More research about the final remains recovered from Lendbreen will be released in the future. The 2019 melt also revealed the first artifacts from another pass on the same ridge, about six miles to the west.

“When we arrived at the site last fall, the surface of the ice in the pass was littered with artefacts and horse dung,” Finstad said. “The remaining ice from the time of the pass probably melted out. The final melt revealed many remarkable finds, such as a dog with collar and leash, a horse snowshoe and a wooden box with the lid still on.”