Meet the caterpillar that uses its old heads for defense 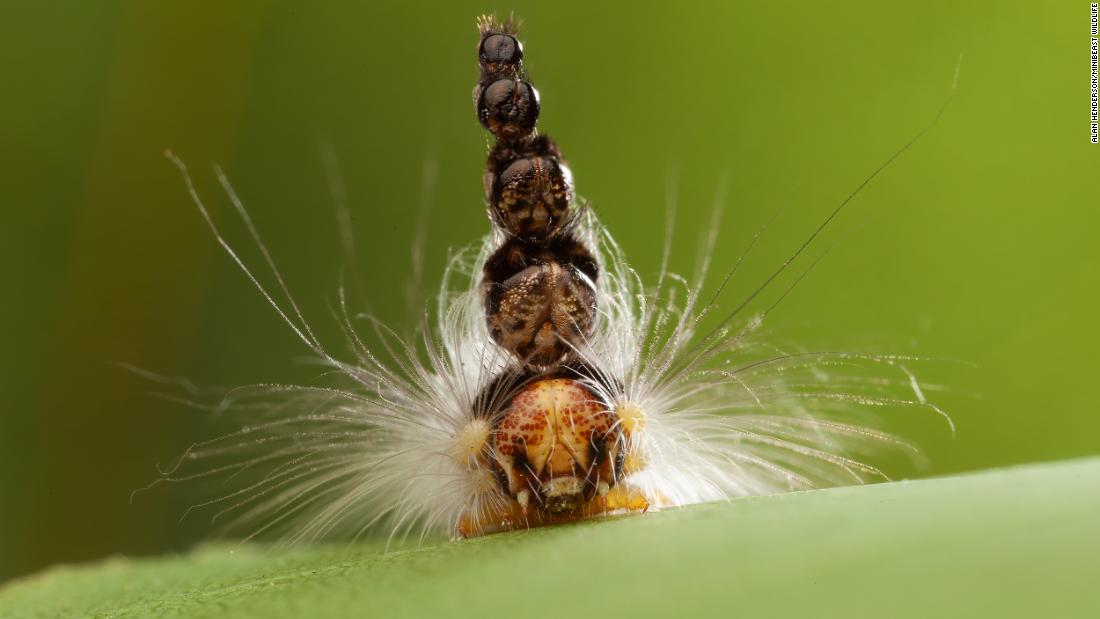 Native to Australia, Uraba lugens is a strange caterpillar that stacks its molted heads atop each other. With every molt, the stack becomes an increasingly tall, tapering tower since every head is larger than the last.

That’s how this freaky creepy-crawly got its nickname, the “mad hatterpillar.” This morbid headgear serves as a diversion when hungry predators are about.

Like all insects, these caterpillars go through stages during which they shed their outer skin, including their heads. Depending on the quality of the food available to them, U. lugens go through eight to 13 larval stages, or instars, on their way to becoming pupae, said Dieter Hochuli, a professor of school of life and environmental sciences at The University of Sydney in Australia. That’s the stage during which the larvae, within their cocoons, transform into adult moths.

Other caterpillars would normally shed their skin and heads and leave them behind. But U. lugens, and a few other species of caterpillars, just can’t let go of its molted baggage.

“The molted head capsules start stacking early but they are not always visible, as the smaller ones get dislodged over time,” Hochuli said. “It’s not uncommon to see caterpillars with at least five old heads stacked on top of the one they are currently using.”

For weeks before they become moths, these insects carry their dead heads, which can stack up to 12 millimeters (0.47 inches) tall — nearly half of the caterpillar’s maximum body length of 25 millimeters.

A peculiar method for defense

The primary reason for the caterpillars’ head-stacking behavior is, reportedly, to keep from being eaten.

“They look bigger, so they’re more threatening and look more formidable to a potential predator,” Henderson said. “Another theory is that it may provide a false target, so a predator such as a jumping spider or something that’s targeting a part of the animal might go for the wrong part. It gives the caterpillar a chance to get away.”

U. lugens also use their heads as a weapon or shield against various insects, especially repelling assassin bugs that try to inject the caterpillars with a needle-like mouth and suck out their insides.

In one of Hochuli’s experiments, he and other researchers removed the head stacks from some caterpillars, left them on others, and kept tabs on their survival once they were back in the field. Caterpillars who kept their extra heads were much more likely to survive in the field.

In a second observation, the researchers “observed the animals deflecting attacks by shaking their heads around vigorously, as well as unsuspecting predators with sword-like mouthparts attacking the head stacks rather than the body of the caterpillars,” Hochuli added.

The caterpillar’s headpiece buys it time, but having a predator become disgruntled and move onto other prey isn’t guaranteed.

“Life as a caterpillar is hard … you are more than likely to get eaten by something,” Hochuli said in an email. “Uraba has a suite of parasitoids that eat it, wasps and flies that lay their eggs in or outside the caterpillars and then eat them alive, eventually killing them. Birds take them too.”

Luckily, U. lugens’ headgear isn’t its only armor — their bodies are covered with stinging hairs that irritate animals and humans that come into contact with them, and that “are probably the main form of defence against predators,” Hochuli explained.

These caterpillars are also quite sociable when they hatch, forming tight clusters to feed in before going out on their own when they mature. “There’s safety in numbers, being part of a larger group,” Hochuli said.

Also in its arsenal is writhing around to evade a predator’s grasp, and vomiting out its guts.

“They’ll just spew out a whole bit of yucky green liquid that probably smells and tastes awful,” said Alan Henderson, wildlife manager of Minibeast Wildlife, an invertebrate education and resource center in Queensland, Australia. “And if they shove that in the face of the predator, it can turn them off.”

In terms of U. Lugens’ features and talents, they peak when they’re young. Sadly, there’s nothing special about them when they’re moths.

“They’re just a little brown, nondescript moth” with contrasting colors that help them blend in with the trunks of eucalyptus trees, Henderson said. But for a while, their bizarre armor makes it hard for predators to get ahead.

It’s also known as the skeletoniser

Much to the chagrin of some Australian foresters, U. lugens’ meal of choice is the leaves of eucalyptus trees that dominate Australia’s landscape — a preference that gave U. lugens its colloquial name, the “gum-leaf skeletoniser.”

It devours the tender bits of leaves, leaving behind only the scavenged skeleton of veins and stems that are too difficult for the caterpillar to bite and chew.

Every so often, the population of these caterpillars dramatically booms, creating armies of little gum-leaf skeletonisers that make it their mission to “defoliate stands of trees in forests,” Hochuli added.

And where food arises, the skeletonisers follow — they forayed into New Zealand in 1992 once the island country began growing eucalyptus plantations.

Because U. lugens aren’t part of that country’s natural ecology and therefore lack predators that would keep them in check, Henderson said, New Zealand foresters have bred wasps that infest themselves as parasites in the caterpillars to control crop damage worth around $30 million annually.