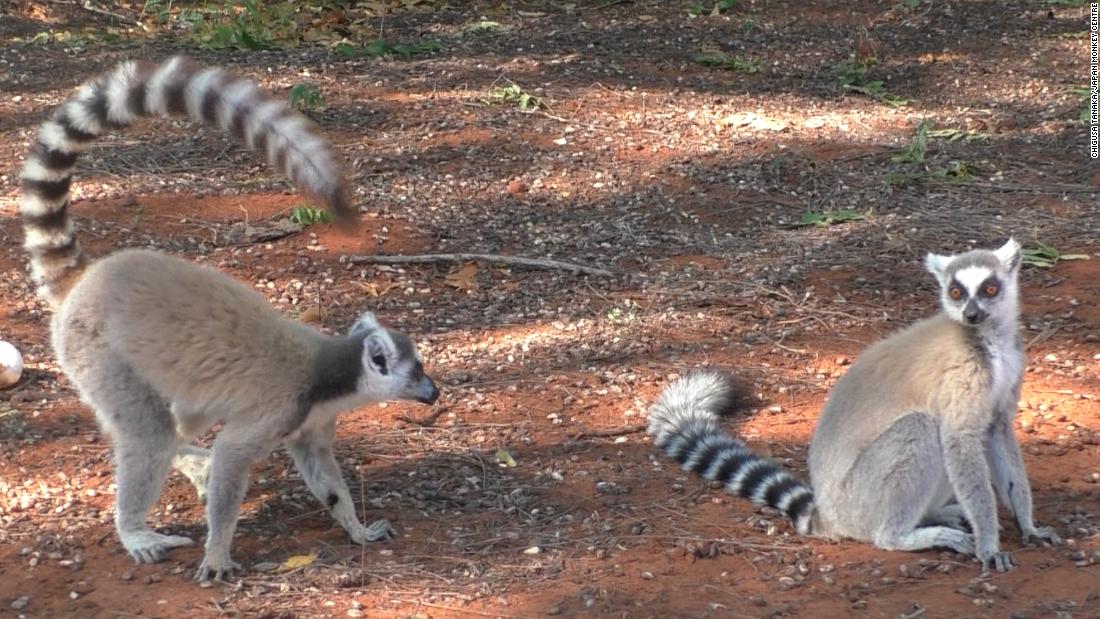 Much like humans wear perfumes and colognes, male ring-tailed lemurs enhance their allure by releasing a fruity and floral scent in the form of a clear liquid from their wrists.

“During the yearly breeding season, male lemurs rub the glands on their wrists against their fluffy tails and then wave them at females in a behavior called ‘stink flirting,'” said University of Tokyo professor and biochemist Kazushige Touhara in a statement. Touhara authored the study, which published Thursday in the journal Current Biology.

Female lemurs then sniffed the scented tails when they were receptive to a mate. And they tended to linger longer over those sweet aroma markings rather than the more bitter scents male lemurs create outside of the breeding season.

Scientists already knew that male ring-tailed lemurs have glands on their wrists that emit a scent used to establish social rank, reproductive status and mark their territory. But when researchers observed the lemurs at the Japanese Monkey Center, they realized the scent glands can be used in another way.

“Since only ring-tailed lemurs have these wrist glands and exhibit ‘stink flirting’ behavior, we reasoned that specific odorants for sexual communication must be involved,” Touhara said.

“Females sniff the floral and fruity scent for a few more seconds than the controls and occasionally even lick it. Although this sounds like a very short time, it’s enough to recognize or evoke curiosities in the male,” said Touhara.

Younger males were able to produce more of the scent than senior males, which was attributed to the decline of testosterone as the male lemurs age.

The researchers studied the lemurs over the course of seven years at the center, and used chemical analysis to identify three compounds that create the sweet aroma.

The clear liquid was sampled by researchers, both during and outside of the breeding season. Gas chromatography-mass spectrometry helped them analyze and identify the elements of the liquid by detecting weight and electrical charge.

The three components of the pheromones were identified as dodecanal, 12-methyltridecanal and tetradecanal. While they were present in scents created during and outside of the breeding season, they were detected at much higher levels when male lemurs were trying to find mates.

When the researchers presented females with each compound on cotton pads, the female lemurs were only interested if the three were combined. But older females who were no longer reproducing acted “unimpressed” by the sweet odor.

“All three compounds have been suggested to be involved in the recognition of newborn sheep by their mothers, and tetradecanal is known as a sex pheromone in some insect species. Although this is the first time 12-methyltridecanal has been identified in primate species, all three aldehydes appear to be used as communication tools widely throughout the animal kingdom,” Touhara said.

Next, the researchers want to determine how directly the pheromones affect lemur behavior and if it leads to more success in finding and securing a mate. Lemurs are native only to Madagascar and nearly every type, including ring-tailed lemurs, are endangered.

“Curiosity does not necessarily mean sexual attraction. We cannot say for certain yet if a female spending a longer time interested in the scent means that a male will be more successful at mating,” Touhara said.

And the researchers want to determine if these are truly pheromones they detected. Scientifically, pheromones are used as a way of communicating between a single species.

“Maybe there are no sex pheromones in humans, but there are probably odors — like parents smelling their baby’s heads — that we use to affect each other’s emotions,” Touhara said.