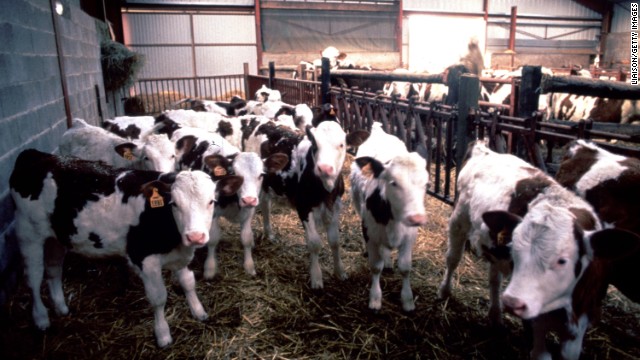 Eating contaminated meat or other products from cattle (excluding dairy products) with BSE is thought to be the cause of vCJD.

BSE is passed between cows through the practice of recycling bovine carcasses for meat and bone meal protein, which is fed back to other cattle.

Both mad cow disease and vCJD are fatal.

1986 – Mad cow disease is first discovered in the United Kingdom. From 1986 through 2001, a British outbreak affects about 180,000 cattle and devastates farming communities.

January 1993 – The BSE epidemic in Britain reaches its peak with almost 1,000 new cases being reported per week.

May 20, 2003 – Canada’s first case of mad cow disease is confirmed in an eight-year-old cow in Alberta. Canadian officials say the cow did not enter the food chain.

December 23, 2003 – The US Department of Agriculture confirms the first case of mad cow disease in the United States. The infected cow is discovered on a farm in Washington State in early December. Japan, China and South Korea stop the importation of US beef. The infected cow was born in Canada, in April 1997 – just four months before the United States and Canada began banning the use of brain and spinal cord tissue in cattle feed.

January 9, 2004 – The USDA says it will begin destroying about 130 cattle that were “herd mates” of the cow that tested positive for the first-ever US case of mad cow disease.

January 26, 2004 – New safeguards against mad cow disease are announced by the Food and Drug Administration. They include banning chicken waste from cattle feed and barring restaurant meat scraps from being used in animal feed.

January 28, 2004 – The Commodity Futures Trading Commission launches an investigation into whether some commodity futures market players may have known about the first US case of mad cow disease before it was announced to the public.

June 20, 2004 – Charlene Singh, the first person known to live in the United States with vCJD, dies.

January 2, 2005 – Canadian health authorities confirm that test results have identified a 10-year-old dairy cow in Alberta as having mad cow disease. This is Canada’s second case of BSE in two years.

March 13, 2006 – The third US case of BSE is confirmed after an Alabama cow tests positive.

September 5, 2008 – Canadian scientists announce a discovery that paves the way for diagnostic testing of live cattle, rather than postmortem.

March 10, 2009 – An anti-malaria drug known as quinacrine, which had reportedly shown promise against mad cow disease, is found to have no effect on the disease according to a British medical study.

March 14, 2009 – The US government permanently bans the slaughter of cows too sick or weak to stand on their own, seeking to further minimize the contraction of mad cow disease.

April 24, 2012 – The USDA confirms the fourth case of BSE, found in a dairy cow from central California. The announcement maintains that the cow was never presented for slaughter for human consumption and poses no risk.

March 2014 – After 15 years, the United States lifts the ban on beef from the European Union, pending inspections.

June 11, 2014 – The USDA announces a recall of 4,000 pounds of beef; a spokesperson cites “an abundance of caution.” The meat comes out of the Fruitland American Meat processing plant in Jackson, Missouri.

October 18, 2018 – Scotland confirms an “isolated case” of mad cow disease has been discovered on a farm in Aberdeen.