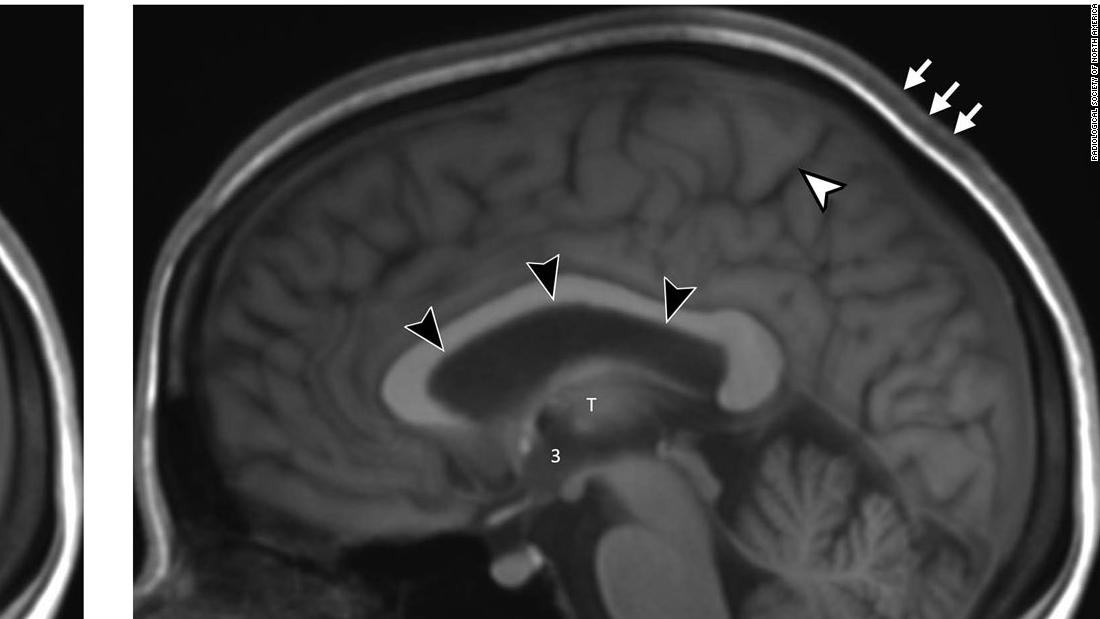 These long-term spaceflight missions on the International Space Station provide many ways to understand how space affects the human body, all of which can help NASA and its astronauts better prepare for missions that will get longer.

The current schedule of six-month stays on the space station will give way to longer stays. NASA’s Artemis program will return humans to the moon by 2024 and eventually land them on the surface of Mars.

This new study suggests that long-term spaceflight can permanently cause changes in brain volume and deform the pituitary gland. The pituitary gland, also called the “master gland,” is a tiny structure at the base of the skull that is responsible for the functions of multiple glands in the human body.

The study published Tuesday in the journal Radiology.

Astronauts on long-term missions aboard the space station have complained of what NASA calls spaceflight-associated neuro-ocular syndrome.

The headward shift of blood that astronauts endure in the absence of gravity creates more pressure on the head. This has caused vision problems in more than half of the astronauts who have spent time on the space station.

After returning to Earth, evaluations of the astronauts have revealed swelling of the optic nerve that connects the eye and brain, retinal bleeding, fluffy white patches on the retina and other changes in eye structure.

Multiple studies have centered on this phenomenon and how to ease it in astronauts, as well as detect other possible changes in brain caused by spaceflight.

“When you’re in microgravity, fluid such as your venous blood no longer pools toward your lower extremities but redistributes headward,” said Dr. Larry A. Kramer at the University of Texas Health Science Center at Houston and lead study author. “That movement of fluid toward your head may be one of the mechanisms causing changes we are observing in the eye and intracranial compartment.”

Eleven astronauts — 10 men and one woman — agreed to participate in the study before and after long-term spaceflight missions on the space station. They underwent brain MRIs before flight, one day after they returned and then several more times over the next year.

Five of the astronauts had previous spaceflight experience and six had none, according to the study. The average time spent by the astronauts in space averaged out to 171 days.

The researchers noticed that the brain and cerebrospinal fluid volumes in the astronauts expanded and increased by 2%. Cerebrospinal fluid can be found in, and surrounding, the spinal cord, as well as the brain’s hollow spaces. These fluids enrich and protect the brain.

These increases remained one year after spaceflight, which led the researchers to believe that the change was permanent.

“What we identified that no one has really identified before is that there is a significant increase of volume in the brain’s white matter from preflight to postflight,” Kramer said. “White matter expansion, in fact, is responsible for the largest increase in combined brain and cerebrospinal fluid volumes post-flight.”

The pituitary gland in six of the astronauts in the study also showed signs of deformation, likely in response to pressure inside the skull.

“We found that the pituitary gland loses height and is smaller post-flight than it was pre-flight,” Dr. Kramer said. “In addition, the dome of the pituitary gland is predominantly convex in astronauts without prior exposure to microgravity but showed evidence of flattening or concavity postflight. This type of deformation is consistent with exposure to elevated intracranial pressures.”

Postflight analysis also showed that the astronauts’ lateral ventricles had increased in volume. These are areas in the brain that contain cerebrospinal fluid. They compared the change to patients who experienced long bouts of bed rest.

They also noticed an uptick in the velocity of cerebrospinal fluid flowing through a small channel that connects the four fluid-filled cavities in the center of the brain. It was comparable to patients with hydrocephalus, where those cavities are unusually large. People with hydrocephalus can have dementia, trouble walking or issues with bladder control — none of which have been associated with astronauts.

Previous issues associated with spaceflight, like bone and muscle loss, have been mitigated on the space station with the addition of exercise equipment and the recommendation that astronauts workout for at least two hours a day.

Researchers are also trying to find countermeasures to combat the fluid shift and head pressure. One includes a suit on the space station that uses pressure to draw fluid back toward the lower limbs. Another possible idea is a centrifuge that can create artificial gravity.

The researchers acknowledged that their study only included a small number of astronauts, among other limiting factors, and that more research is needed.

“If we can better understand the mechanisms that cause ventricles to enlarge in astronauts and develop suitable countermeasures, then maybe some of these discoveries could benefit patients with normal pressure hydrocephalus and other related conditions,” Dr. Kramer said.