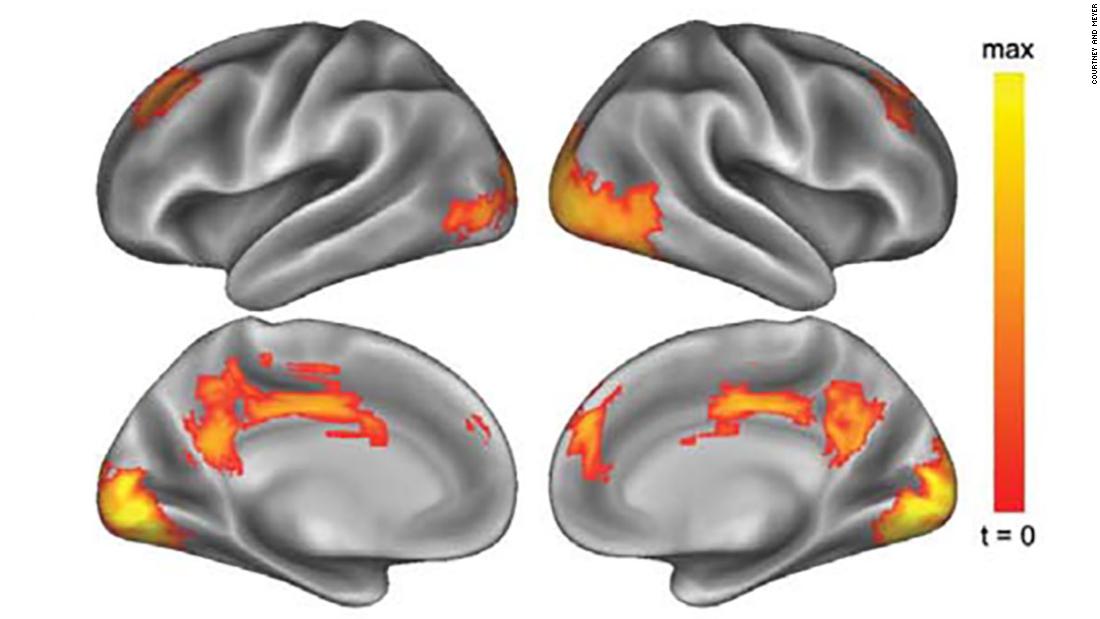 Although feeling close to others is so crucial, how the brain reflects that closeness has remained mostly obscure, according to the study. Filling this research gap was critical, the authors contended, as it might reveal mechanisms doctors and lonely patients could act upon to improve interpersonal connection and thus health.

With increased reports of loneliness around the world due to sheltering in place and social distancing, the impact of loneliness on people’s health has researchers concerned.
Previous research has emphasized the strength of “weak ties” — those maintained by regular interactions with acquaintances with whom we work or attend school. Acquaintances might have an important role in well-being and social support.

“Our findings suggest that understanding how the brain represents weak ties may yield important insight into how loneliness links to negative outcomes,” the study said.

Some recent articles on social distancing and working from home have cited the obscure importance and current absence of weak ties as reason for worry about the potential effects of both shifts on our mental health.

“We’re missing out on a lot of that,” said first author Andrea Courtney, a postdoctoral research fellow in psychology at Stanford University in California. “So that could be a part of why we’re seeing increases in loneliness.”

In the new study, the authors conducted brain scans on the medial prefrontal cortex (MPFC), the region of the brain associated with self-representation — the image a subject has of himself based on his own interpretation.

The purpose was to see how people organized representations of others based on how connected others were to participants’ own identities, and whether loneliness affected that structure.

If the MPFC represented social connections, there were two possible ways, the researchers hypothesized: The MPFC would keep a map of social circles, with people organized by closeness; or interpersonal closeness would affect their own self-representations, with closer peers more similarly represented to themselves.

If the MPFC organized self- and other-representations in either of these ways, the following question was whether loneliness might be linked to alterations in that structure.

The scans showed that the MPFC maintained a network of social circles, based on closeness. The gap between oneself and others that lonely people often perceive was reflected by altered activity patterns in the brains of lonelier participants.

“Other people have looked at loneliness in the brain, but for the most part it’s been how loneliness affects responses to other things” — for example, altered reward or threat responses in people who are lonely, Courtney said.

Before the brain scans, they wrote the names of five people with whom they had the “closest, deepest, most involved and most intimate relationships” and five acquaintances, such as classmates, colleagues or neighbors, ranked in the order in which they felt closest to them.

Responses to the University of California, Los Angeles, Loneliness Scale determined how much participants felt they lacked companionship, had no one to turn to or that people were around them but not with them.

In the MRI experiments, the names and celebrity names were used to elicit brain activation associated with thinking about people close to them and those who were acquaintances.

Afterward, participants scaled their closeness to each target. People close to them were rated closer than acquaintances, who were determined closer than celebrities. The similarity of the people within each group was likewise rated.

Thinking about someone from each category corresponded with a different activity pattern in the medial prefrontal cortex: one each for the self; close others and acquaintances; and celebrities.

British evolutionary psychologist Robin Dunbar has “this idea of social circles in which, basically, there is a maximum number of people that you can maintain in your social circle due to the cognitive demands of interacting with a particular number of people,” Courtney said. “There are sort of only so many people that can belong to your close, intimate circles.”

The closer the subjects were to the participant, the more the activity pattern resembled the pattern seen when they thought of themselves.

But the patterns differed for lonelier individuals — the perceived similarity between themselves and others was reduced. Their brains also grouped all categories of people and those within them as similar — regardless of the fact that they actually listed different people as being close or acquaintances, and regardless of the person they thought about during the scan.

“You would expect there to be this differentiation between close others and acquaintances, but actually you’re seeing less of that for people who are lonely,” Courtney said.

“This blurring of social circles with loneliness was even observed in the similarity between close others and celebrities,” the study said.

The inner workings of our social brain

Though the participants’ brains represented themselves separately from others, that distance was bridged by their brains’ perceptions of their closest friends as the most similar to themselves.

“The social brain appears to map our personal ties, and alterations in this map may help explain why lonely individuals endorse statements such as ‘people are around me but not with me,'” the study said.

Overlap between perceptions of ourselves and others is a defining characteristic of relationships — it supports greater empathy, helps us bond and facilitates social coordination.

Overlap may happen in a few ways, Courtney said: Maybe the closer people are, the more they’re incorporated into our own self-image. Sharing memories and goals with them or considering them more valuable or relevant to us may also contribute. Neural representations of this self-other overlap were difficult to test before this study.

Regarding how lonelier individuals blurred the lines between groups, chronic loneliness may somehow suppress the distinctiveness with which members are represented in the brain, the study said.

The findings give researchers “another brain region to investigate for genetic expression patterns related to trait loneliness,” said Turhan Canli, a professor of integrative neuroscience at Stony Brook University in New York state, who wasn’t involved in the study.

Though the perceived self-other gap showed up in brain activation patterns, it’s unclear which circumstance happened first. Did loneliness lead to how the brain perceived relationships? Or did altered neural activity lead to loneliness and further the gap? How the disparity between neural activity and what participants said is possible is also unknown. The questions couldn’t be answered by the current study, but they’re queries Courtney said she’s interested in following up on.

“One thing that we’re really interested in teasing apart is whether there’s a sort of cyclical relationship so that a perceived gap might actually drive lonely people to pursue relationships less, which might confirm their intuitions but also increase that gap,” Courtney said.

Loneliness can result from several situations, including acting as a defense mechanism to mitigate social threat and avoid the risk of rejection, Courtney said. A lack of empathy or social skills, or depression might also cause or add to loneliness.

But genetic studies with twins showed that loneliness can also be a trait, Canli said. A trait-lonely person would feel lonely all the time.

“It is possible that in trait-lonely individuals, various genetic predispositions wire up the brain to process social information differently then in non-lonely people,” he added. “In that case, the brain representation of others would come first and be present at the very beginning of an infant’s development and interactions with the social world. The developing brain would then be shaped by these social experiences, which could further promote dissimilar self-other neural representations.”

If you’re lonely, thinking of how to change your brain activity isn’t feasible. But since the loneliness version of the chicken-or-the-egg dilemma hasn’t yet been solved, it might be easier to work on the way you view your relationships.

Reach out to friends to rediscover and foster closeness, Courtney said. Consider whether you’re under-perceiving the amount of social support you do have.

“If we know that about ourselves,” she said, “we can change and shift and actually try to look out for more sources of social support in our network.”