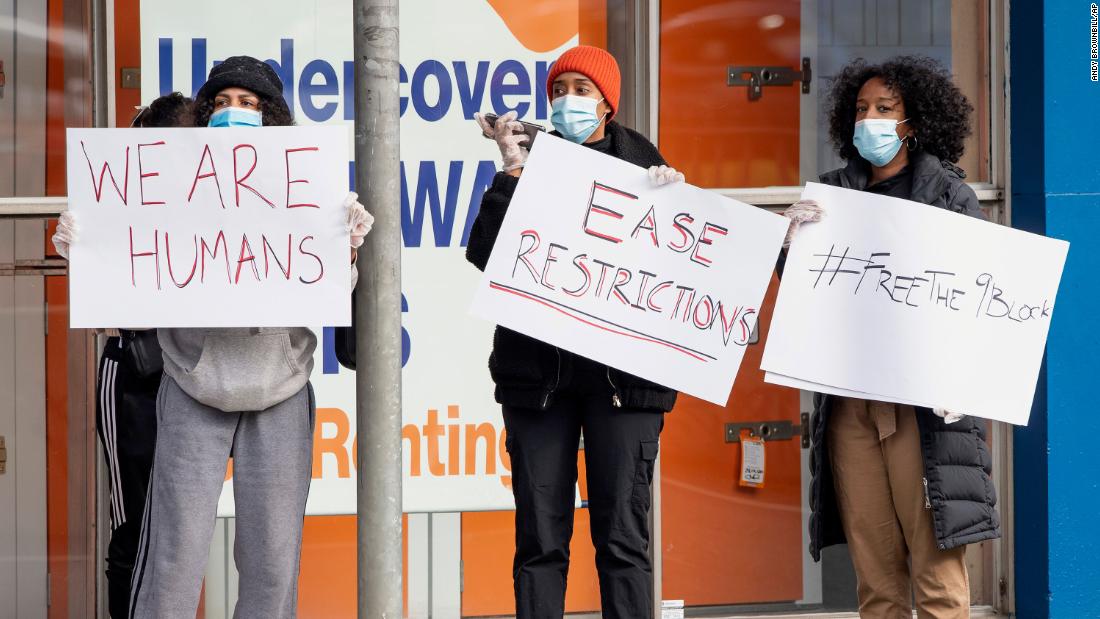 After months of closures, governments are eager to reopen schools and businesses to allow people to get on with their lives. But fresh clusters of infection have seen leaders forced to reimpose restrictions in some hotspots, even as rules are eased elsewhere in the same country.

There are hopes this approach could minimize the economic damage resulting from large-scale shutdowns. In Portugal, for example, 19 boroughs on the outskirts of Lisbon have shut down, while the capital’s downtown area has continued its reopening, along with the rest of the country.

The German city of Guetersloh was put back into lockdown after 1,331 workers at its Toennies meat processing factory tested positive for the virus. Germany had few infections elsewhere, and the outbreak caused a sharp rise in the nation’s R-number, a value indicating how fast the virus is spreading, according to its center for disease control, the Robert Koch Institute.

Alexander Kekulé, a virology professor and Director of the Institute for Biosecurity Research in Germany, told CNN: “The only strategy we can have is a stamping-out strategy. It’s the same thing we do usually when we have new clusters of infections of any novel disease.”

He said such moves were the “new normal,” but needed to be combined with other measures, such as wearing masks and maintaining social distancing, as well as efficient systems to track and trace outbreaks before case numbers enter the hundreds.

Kekulé said this was about clusters, rather than a second wave.

“We should get used to it,” he added. “In many places of the world people are really used to rules, for instance: Mosquito nets. And you can argue that the mosquito net is terrible and will change your whole life — and it’s like everybody argues against masks — but when you have at the other side a deadly disease, and no real good idea how to survive until the vaccine will come, one day or never, then I think it’s the best chance we have.”

Guetersloh’s lockdown was lifted Monday when a court in the state of North Rhine-Westfalia ruled that the regulation was “no longer compatible with the principle of proportionality and the principle of equal treatment.”

Residents reported facing prejudice from the rest of the country, with a T-shirt on sale reading, “Keep a distance, I am from Guetersloh,” and CNN affiliate n-tv reporting that people with Guetersloh license plates were worried about driving outside the district for fear of discrimination.

In the Italian city of Mondragone, authorities sealed off a building that housed migrant seasonal workers as a “red zone” late last month after 49 people tested positive for Covid-19. The army was sent to monitor the hotspot and a group of workers living in the building broke the quarantine to protest.

The governor of the Campania region, Vincenzo De Luca, blamed foreign workers for the “contagion,” in an interview published on his Twitter account: “As always, we worked to assure the serenity of our families. In the coming weeks I believe we will do a wide check on seasonal workers.”

A spokesperson for the Italian Interior Minister told CNN that military controls were ending Tuesday night with only 10 positive cases remaining in the building, which they said local health authorities could easily monitor.

And in Serbia, police in the capital Belgrade on Tuesday fired tear gas at protesters demonstrating against the President Aleksandar Vucic after he announced a weekend-long curfew to try to combat a surge in cases.

On Tuesday, Serbia recorded its highest daily death toll from Covid-19 since the start of the pandemic, with Vucic calling the situation in Belgrade “alarming.”

The English city of Leicester returned to lockdown for two weeks from July 2, with non-essential businesses shutting, people advised to minimize social contact, and schools closed for most children, after a spike in cases there.

UK Prime Minister Boris Johnson warned that Leicester showed “the virus is out there still circling like a shark in the water,” raising fears of further lockdowns in other UK areas with rising numbers of new cases. After UK pubs opened last weekend, three establishments announced they were shutting because customers had tested positive for the coronavirus.

Leicester couple Naeem and Aisha Brisco formed an organization called Project Hope with two friends, to deliver food and necessities to vulnerable people in the community.

Naeem Brisco, whose IT company is currently closed, told CNN more people seemed to be struggling financially this time around. “I have noticed that there’s been more calls coming through,” he said.

With the rest of the country able to visit relatives and return to pubs after England’s lockdown was eased on July 4, “Leicester feels a bit left out,” he said.

Brisco said support was coming from the grassroots. “I think mainly the locals are getting together and just trying to be there for their neighbors and family.”

The charity Save the Children says more than 25,000 children live in poverty in Leicester; it has warned that deprivation could soar during the new lockdown.

But Brisco stressed it was important not to stereotype areas. “I can see a lot of unity and we talk about ethnic minorities, I get that, but if we remember, we’ve got people of all backgrounds in Leicester. Certain words that we use can put people in a minority position.”

He said people were “scared” but happy to do what needed to be done to contain the spread of the virus.

As for businesses: “How long they can sustain for, I don’t know,” he said.

Sharifah Sekalala, Associate Professor at Warwick Law School, told CNN it was “a real concern” that local lockdowns could mean “communities that are already deprived might then get deprived even further.”

She said the onus should not be on people who work in factories, use public transport, live in crowded housing or face social deprivation to enforce social distancing.

“What you end up with is just really easily stigmatizing all of certain groups of people,” she said. “This is really problematic, in terms of class but also in terms of ethnic groups that certain groups are going to be disproportionately more affected.”

Sekalala said government should hold industries to account — as when the French government took Amazon to court for not practicing social distancing — and “think really carefully about what a social safety net looks like in times of a crisis.”

This includes providing appropriate housing that is not as densely populated, making sure transport to workplaces is socially distanced, and ensuring people can sustain themselves in the long term — not just receiving furlough payments before losing their job.

Sekalala said lockdowns should not be “punitive” towards a particular region. “We need to shift the narrative about this localized lockdown, because it seems to me that the people who are locking down make a personal sacrifice on behalf of the whole country,” she said.

In the Australian state of Victoria, 6.6 million people have been isolated from the rest of the country for six weeks after Melbourne saw a record rise in daily case numbers.

On Saturday, 3,000 residents of nine densely populated public housing estates were put under full lockdown and from Wednesday, residents in metropolitan Melbourne are no longer allowed to leave their homes, except for grocery shopping, caregiving, exercise or work.

Victoria’s border with New South Wales will close for the first time since the pandemic began.

“We know we’re on the cusp of something very, very bad if we don’t get on top of this,” Victoria’s State Premier Daniel Andrews told reporters Tuesday, describing the surge in numbers as unsustainable.

“I think a sense of complacency has crept into us as we let our frustrations get the better of us,” Andrews said.

Melbourne cafe owner Steffan Tissa told CNN that he switched to takeout service for around three months before reopening to dine-in customers recently. Now his cafe, West 48, is closing its doors again. Tissa said he understands it’s a necessity, but it will be “difficult” for his business.

“When it first started, we had to let staff go,” he said. “And then as the lockdown started to ease off, we brought new staff on.

“We’ve been quite encouraged by it and now to have to go back, we’re in a state of limbo, you know, where will our new normal be just in terms of how trade goes?” he said. “Financially, it could be quite a challenge.”

Dr. Anthony Fauci, director of the National Institute of Allergy and Infectious Diseases, warned on Tuesday that the US is “still knee-deep in the first wave” of coronavirus, and seeing “a resurgence of infections” after never really reducing them to a safe level in the first place.
California and Florida closed beaches over the holiday weekend. Colorado is closing bars for July. Arizona has shut bars, gyms, and other businesses for a month.
New York, New Jersey and Connecticut are asking people from 16 states to self-quarantine upon arrival, while Massachusetts is doing the same for all bar seven northeastern states.

It is facing a near 40-fold increase in daily cases from mid-May, when the nation appeared to have the virus under control.

Prime Minister Benjamin Netanyahu told a cabinet meeting Monday that “we must take immediate steps that will prevent us from having to take even more extreme measures later.”

But Kekulé, the virology professor, believes that large-scale reopening and then locking down again is a mistake, and risks causing psychological or economic damage to those affected.

“We need a reliable picture of our future or the economy,” he told CNN. “You cannot plan when you have the possibilities of lockdowns at any time. People will not do that several times, again and again.

“In the United States, or also in Brazil, we have the situation that the people are beginning to fight against lockdowns and I understand why they are doing that,” he said.

“Instead of braking and accelerating, we needed a completely different concept… some kind of continuous response to the disease or to the outbreak.

“Whenever we loosen these lockdowns without having a replacement strategy you will get outbreaks again, because you have only very few people who are immune.”

This could be the most complex and nuanced phase of the pandemic yet.