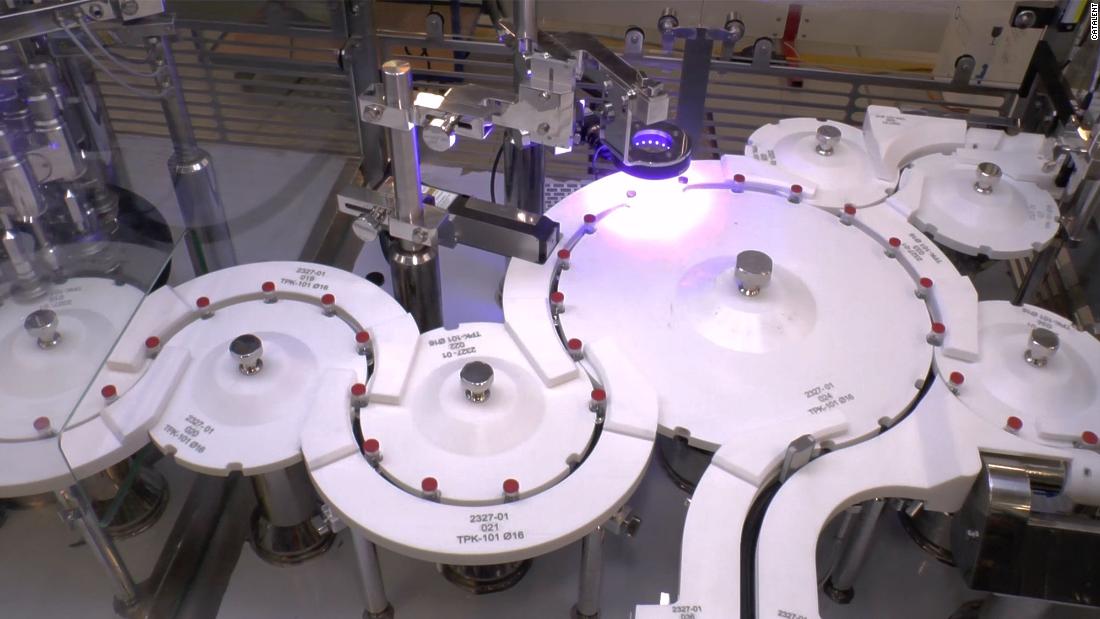 “She didn’t actually realize how close to the manufacturer of the Covid vaccine I was,” said Leonard. “She was so tickled by it.”

Leonard said even her 9- and 11-year-old kids know that, while she has to work really long days, what she is doing is important work.

“I tell them I’m doing this for you guys, and for grandma, and for your teachers,” Leonard said.

Biden announced that drugmaker Merck will help manufacture the Johnson & Johnson vaccine — a decision made after it became clear that J&J would fall short of its manufacturing goals. The planned partnership was first reported by The Washington Post.
The White House said it was utilizing the Defense Production Act to help equip two Merck facilities to manufacture the Johnson & Johnson product, including by bolstering “fill-finish” capacity, when the doses are placed in vials, and by increasing availability of the components of the vaccines.

There may still be delays, but Biden said Tuesday the United States would have enough Covid-19 vaccine doses for every adult American by the end of May.

‘You can’t accelerate it by yelling at it’

Before the J&J vaccine can ever get into someone’s arm, it must go through a sophisticated and complicated process that involves several companies. It can’t happen overnight, but companies say vaccine manufacturing has moved at a speed that has never been seen before in the history of pharmaceutical manufacturing.

J&J said it has been working with “urgency” to increase production of the vaccine candidate, but it isn’t easy.

“The production of our vaccine is a highly complex process that requires very particular capabilities and experiences,” Dr. Richard Nettles, J&J’s vice president of US medical affairs told the subcommittee on Oversight and Investigations for the House Committee on Energy & Commerce last week.

It takes about five or six weeks to genetically engineer and then grow, purify, and finish the vaccine before it can be bottled and sealed and sent on its way to be distributed to vaccine centers.

Put another way, Dr. Paul Stoffels, chief scientific officer for Johnson & Johnson, told CNN, “you can’t accelerate it by yelling at it.”

J&J has looked at 100 potential production sites and found eight that meet its needs so far, Nettles said. Three have produced test batches of the vaccine. It expects to have additional capacity by the second quarter of the year and will be made in the US, Europe, Asia and Africa.

Leonard works at the bustling Catalent facility in Bloomington, Indiana, that sits in a nondescript building tucked away by the indoor pickleball court and the Budweiser distributor. Five shifts of 2,000 employees keep the buzzing production lines going 24 hours a day, seven days a week.
It started production of the J&J vaccine at the end of January and should get the regulatory authority to ship from the plant soon. The doses going out this week come from elsewhere.

Catalent hopes to meet the increasing demands for vaccines to help end the pandemic.

“We are going as fast as we can,” Leonard said. “In such a regulated industry, there are certain steps that you just can’t speed up any faster, but I think we are doing amazing things to get the vaccine out as quickly as we have. Everyone at the site feels a great responsibility to do that and we’re working day and night to get it done.”

The plant that, decades ago, made TVs is now helping make the substance that the country is counting on to end its isolation.

How the vaccine is made

The company that actually starts the manufacturing process for J&J is not Catalent, but Baltimore-based Emergent Biosolutions.

Emergent does the work genetically engineering a virus known as adenovirus 26 that causes the common cold in humans. Genes are removed from the virus so it won’t replicate and spread in the body. Genetic material is also removed to make room for the genetic instructions for making a piece of the coronavirus spike protein that it uses to attach to cells.

This adenovirus vector is grown in vats of human cells in large reactors. The resulting virus is purified to remove debris. It’s a biologic process that takes several weeks before the resulting product can be frozen and shipped hundreds of miles to companies such as Catalent.

For both the J&J and Moderna vaccine, Catalent is one of the companies doing what’s known in the industry as the “fill/finish” part of the manufacturing process.

Catalent will be a part of the effort to scale up J&J’s manufacturing. They are a last manufacturing step before it heads out to a distributor and a vaccination site that can get it into someone’s arm.

“What that involves is taking the bulk drug substance, formulating that into its final form, sterile filling it into vials doing 100% visual inspection, packaging, and then the final quality control testing,” said Mike Riley, region president, biologics, North America for Catalent. “These products need to be completely sterile so that whole process is highly controlled and highly validated.”

Manufacturing a vaccine needs to be clean and carefully managed. Workers put on sterile garments before they enter a clean room, where they then reach through gloves that go through glass to get into isolator equipment where the sterile vaccine product goes into the glass containers.

The vaccines are inspected and then fly through high speed manufacturing lines — conveyors that pass-through label machines that then get packed up into safe cases that get shipped out from there.

Every step is carefully regulated and every step must be kept under a close watchful eye so nothing else can be introduced into the glass vials beyond the vaccine itself.

Increasing production to stop the pandemic

During the pandemic, Catalent, with manufacturing facilities around the world, has worked with more than 80 Covid-19 related compounds from 60 different companies to make antivirals, other treatments and vaccines. It has done this all while continuing to make hundreds of other critical medications to treat everything from cancer to heart disease.

Knowing the demand, it is continually increasing the rate of its production. The company accelerated the expansion of the Indiana facility by about 10 months so that it could have the capacity to produce the vaccines at the scale that is needed.

“Activities that sometimes will take place over the course of two or three years, we’ve been doing over months,” Riley said. “Construction partners, subcontractors, you know all of them, we’ve had a really singular focus on how we can accomplish this and get ourselves out of the pandemic.

Catalent also hired a “significant amount of staff” in the past year, Riley said, to keep up with it. Leonard, was one of those new hires in August. She had never even set foot into the factory before she took the job. She was hired over Zoom.

“I jumped in right at the busiest time here ever,” Leonard said. “It’s been a big challenge but it is also very exciting.”

Riley said Catalent has been working and planning with vaccine companies about how they would make these vaccines for almost a year now, long before scientists had figured out what a successful vaccine would look like and got authorization from the US Food and Drug Administration.

“When we started work with Johnson and Johnson, with Moderna, with others, we anticipated having to ramp up very substantially our production,” said Riley. “As such, we’ve been adding significant staff over the past year just to make sure that we can run 24 hours, seven day production once the vaccine was approved.”

Riley said that Catalent’s employees have been doing “extraordinary things during a global pandemic.”

“I’m going to quote our chief operating officer. ‘The impossible is not impossible, it just hasn’t been done yet,’ ” Riley said. “There’s no other choice. As an industry, as a country, we’ve got to find a way out of this pandemic.”