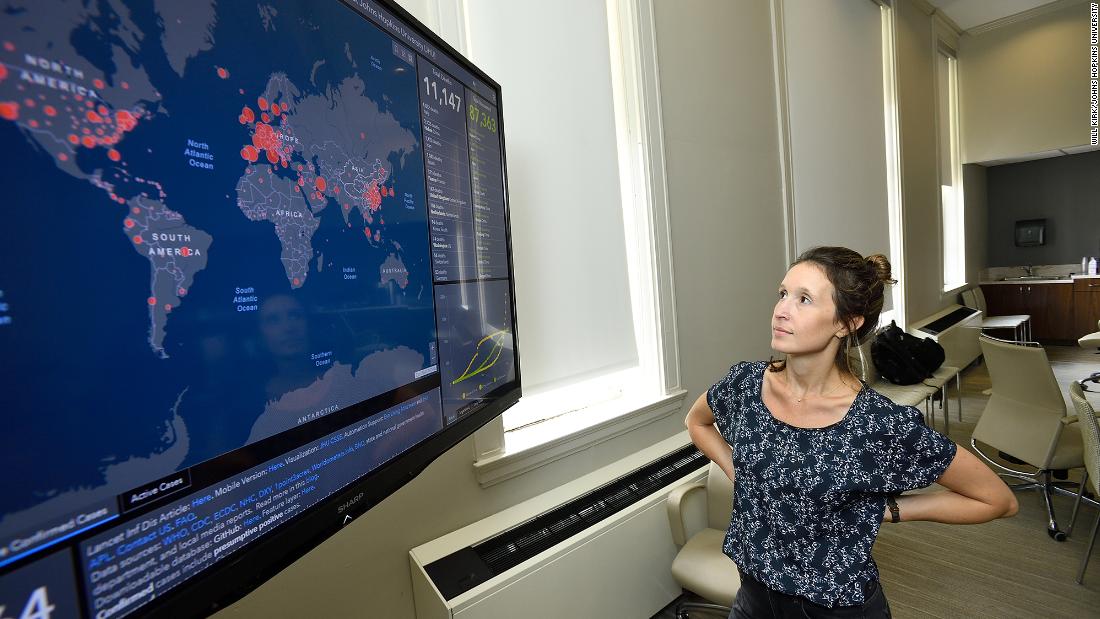 “We were collecting data on a new virus that nobody understood at a time [when] there was not a single web page dedicated to Covid-19 case count,” said Lauren Gardner, the project’s chief and an associate professor in, and codirector of, the Center for Systems Science and Engineering at Johns Hopkins Whiting School of Engineering.

From December 2019 to January 2020, Ensheng Dong, Gardner’s first-year PhD student, heard from family in China who regularly reported how the outbreak was worsening and upending their lives. After passing an exam that cleared him to earn his PhD, tracking confirmed cases in China was what he wanted to tackle next.

On January 21, over coffee during a weekly research meeting, Dong proposed this idea to Gardner.

His background in spatial data visualization and Gardner’s past in modeling infectious diseases converged to create the first iteration of the dashboard — which they finished that night and published the next day. The map’s alarming red dots then reflected only 320 reported cases — mostly in China, the rest in Thailand, Japan and South Korea.

“He’s gotten to play some pretty major roles in some really central problems to the society for someone that’s six months into a degree program,” Gardner said. “I keep telling him that he needs to not get used to this and it’s not normal. And [that] the rest of his PhD experience is going to be really boring, but I don’t think he believes me.”

For two weeks from dawn till dusk, Dong lived and breathed the dashboard; it took precedence over his free time outside of class and soon the classes themselves. With Gardner’s blessing, he pushed back a required course until the fall semester.

Has maintaining those responsibilities affected his health in any way? “Not really,” he said. “I think this is what the research should do. The responsibility for this dashboard gives me energy.”

But as cases became globally widespread, they needed help.

“Initially, [I worried about my family]; right now, it’s their time to worry about my situation in the US,” Dong said.

What was once a modest goal to fill a research gap in a field with antiquated methods for disease tracking is now a tool widely used around the world.

They had no idea “that it would evolve into something that literally impacts almost everybody’s life on the planet,” Gardner said.

From erratic data to the map on our screens

About 25 people from multiple disciplines now support the dashboard, including graduate students and senior software developers and research scientists primarily based in Maryland, California and England.

Like a lot of people, they’re working from home. Their days begin with Zoom calls during which they hash out to-do lists and pressing issues. The conversation continues through a myriad of Slack channels, emails and phone calls.

Gardner is in charge, so everyone involved reports to her. Her daily to-do list involves running a research group of PhD students, overseeing data additions and design for the dashboard and making strategic decisions for the development of the dashboard. She spends about half of her time on research based on data from the map.

From dozens of sources including local health departments and data aggregating websites, the dashboard reports cases from more than 3,500 locations — at the province level in China; at the county level in the US; and at subnational and national levels elsewhere.

Because they update the dashboard at least hourly, they’ve had to shift from manual data collection to leaning more on automatic culling — the team praised data wizards at the university’s Applied Physics Laboratory for creating a code that periodically travels to trusted websites and scrapes for data. For independent research and the US government, the APL provides technological systems engineering, development and analysis.

The automated code aggregates the data and publishes it into GitHub, a software development platform. An anomaly detection system reviews every number that comes in and holds back anything that doesn’t make sense, explained Ryan Lau, a graduate software engineer in the lab. Sometimes the web sources are technologically unreliable, but the case data is accurate in regard to what has been reported, Gardner said.
The teams manually validate and approve numbers before letting them be processed through a geographic information systems tool into the visualizations we see.

“Not to be cliche, but a picture is worth a thousand words,” Lau said. The APL team works on building and maintaining the automated capabilities of the data-pulling code.

Frequent updates and data from multiple sources is what makes the dashboard different from the World Health Organization’s tracker, which counts only states and nations, said Beth Blauer, executive director of the Center for Government Excellence at the university’s 21st Century Cities Initiative, a campus hub for research, teaching and outreach that ensures governments think of data as a critical asset for problem-solving.

Blauer’s work with the Center for Government Excellence is her day job, but she also began working with the data in March after she used the map to assess the risk of traveling.

Blauer is one of the technology and data gurus behind the US map, which is separate from and more detailed than the global map. Her tasks include researching, reviewing and interviewing about US testing and county case data to provide additional insights for the university’s Coronavirus Resource Center.

She’s also a single mom. “[My kids] deserve some kind of an award for the way that they’ve been able to stick with me through this,” Blauer said.

The map places at people’s fingertips “information upon which they can make really important decisions,” said Jennifer Nuzzo, who works on projects similar to Blauer’s, but for the Coronavirus Resource Center. Nuzzo is an associate professor in the university’s Bloomberg School of Public Health and a senior scholar at the Johns Hopkins Center for Health Security.

“For governments, it’s about very high consequence decisions about protecting health and supporting the economy. And for people, it’s about how to protect yourself and your loved ones.”

The challenges of informing the world

Work that relays ever-changing information from thousands of places comes with hurdles. There’s no international modus operandi for how to count coronavirus infections and deaths.

The dashboard’s infrastructure is more stable these days, but the “sources and information coming in are still changing quite a bit,” Gardner said.

Stumbling blocks have included when the US Centers for Disease Control and Prevention suggested local health officials switch from reporting only confirmed cases and deaths to also probable cases and deaths.

And sometimes the numbers between state and county health departments don’t match up — they report differently or at varying times.

Each time these transitions happen, the team has to figure out how to handle them.

The biggest challenge is trying to collect data “from multiple locations simultaneously and provide it in real time while all of those dynamics are at play,” Gardner said. Knowing there are so many eyes on it and having to explain it is difficult, too, she added.

The dashboard hasn’t been without controversy. The soundness of data aggregating website Worldometer is considered questionable by some academics, but the site is one of many sources from which the JHU dashboard pulls data.

Lessons on human behavior and how a virus travels

Besides the dashboard, the data also supports analyses for the university’s Coronavirus Resource Center, which aims to help understanding of the virus and policymaking.
The US state policy timeline is an interactive graphic that draws “distinct connections” between states’ decisions in regard to closing and reopening phases and “how the pandemic is unfolding at the local level,” Blauer said.
Map data combined with demographic data may tell the story of how the pandemic has exacerbated inequities in communities of people of color and those with lower income — which have higher rates of serious illness and death from Covid-19.

A county’s health care capacity and access, demographics and disease data in comparison to its state are three factors starting to reveal those disparities.

Data on testing and contact tracing could illuminate long-term patterns regarding race, socioeconomic status and systemic barriers to testing access — an effort headed by Blauer and Nuzzo.

“There is nothing so stark than looking at the disproportionate amount of Black and Latino people that are [contracting and] dying from this disease, knowing there is no medical safety net for them and also understanding that there are deliberate decisions that aren’t taking their best interests in mind,” Blauer said.

“This is the piece that I think has been the most difficult for me.”

How they’re coping during the pandemic

For a long time, Gardner felt removed from reality since busyness left no time for reflection on what was happening around her. Since the dashboard processes have stabilized, she’s been able to focus more on the circumstances.

“I would say that I’m probably one of the more frustrated people with the situation, because I am just so well aware of the patterns, the trends, the direction we’re going and mistakes we’re making,” she said. “Watching that happen … it’s extra frustrating.”

Dong frets about his family in China, but the work gets into his subconscious as well. His pandemic-era dreams look like worrying over the quality of the data, which makes him incredibly anxious, he said.

Seeing the contextual reality of the data and thus being able to understand relative risks helps Nuzzo cope with what might otherwise be constant worry. But she also “can’t shut off the pandemic.”

“It’s both my job and my life in a way that usually at the end of your workday, you get a break from what you’re working on,” she said. “We don’t escape it at all. That can be just emotionally exhausting.”

What the future holds

The need for this kind of data and analysis isn’t going away any time soon, Nuzzo presumed.

“I’ve been focusing on [pandemic preparedness] for 20 years,” she said. “I unfortunately know that we live in an age of epidemics … We are building an important process and infrastructure that I hope we never have to use again, but data tells me we very well may have to use that again.”

Considering how the dashboard will be used during and after the pandemic has been fruitful.

Data for the dashboard informed Gardner’s study on the association between social distancing and Covid-19 transmission in the US. A NASA-funded project will analyze how climate and seasonality contribute to the spread of the disease. They’ve also received support from the National Institutes of Health and the National Science Foundation for further studies.
Philanthropic donations, including from Bloomberg Philanthropies and the Stavros Niarchos Foundation, have been the additional support needed to keep the research train chugging and flexible in regard to what the team can pursue.

“I believe there’s a vision of the world in which if outbreaks of a new virus happen, we can also have the public health capabilities to stop the virus in its place, to prevent it from becoming a global pandemic,” Nuzzo said. “But as we’re seeing now, we have more work to do in order to make that happen.”