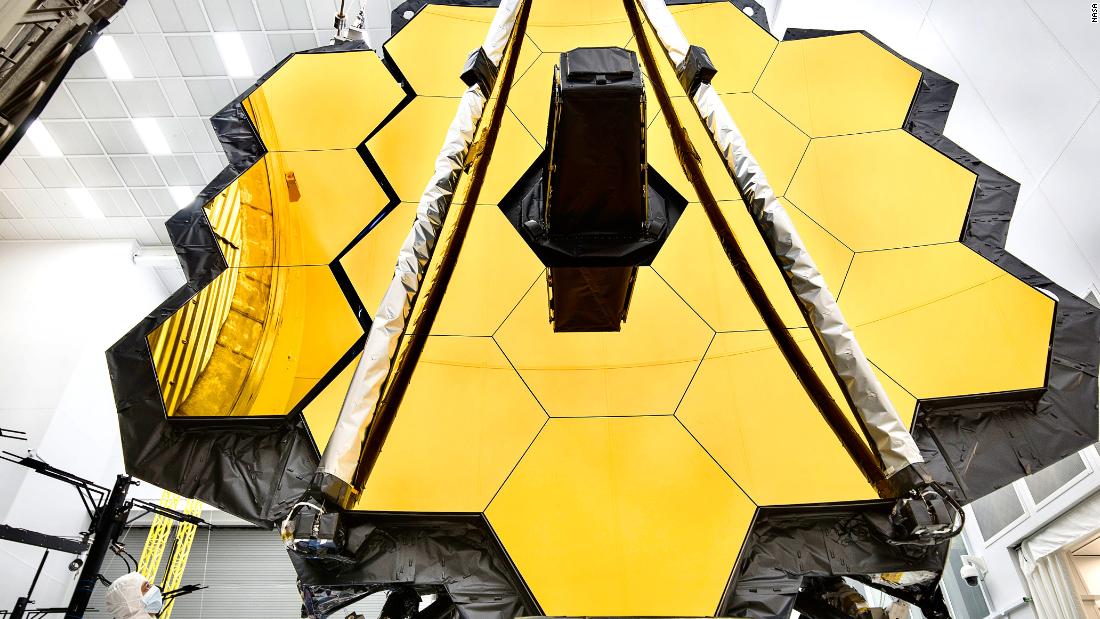 And in March, despite the threat of shutdowns due to the novel coronavirus pandemic, the infrared telescope passed another milestone test on the path to launch.

It’s the largest mirror NASA has ever built, the agency said, but its size created a unique problem. The mirror was so large that it couldn’t fit inside a rocket. So they designed the telescope as a series of moving parts that can fold origami-style and fit inside a 16-foot space for launch.

During the recent mirror deployment test, the mission team was able to see the large mirror completely unfurled — the same way it will be in space. The test took place in the cleanroom at Northrup Grumman Space Systems in California. The company has a contract with NASA for multiple missions.

In the test, the spacecraft successfully responded to commands to extend the mirror to its complete size.

It’s one of a series of tests on a long list that will need to be checked off before the space telescope is packed up and shipped to French Guiana, where the 2021 launch will take place.

“Deploying both wings of the telescope while part of the fully assembled observatory is another significant milestone showing Webb will deploy properly in space. This is a great achievement and an inspiring image for the entire team,” said Lee Feinberg, optical telescope element manager for Webb at NASA’s Goddard Space Flight Center in Greenbelt, Maryland.

The coronavirus pandemic will likely affect future testing for the space telescope.

Northrop Grumman’s team has reduced their onsite personnel until sometime in April. After the Deployable Tower Assembly, another crucial component of the telescope, is set up, the project will shut down as NASA assesses when and how to resume testing and if conditions are safe for personnel.

The Deployable Tower Assembly (DTA) is 10 feet long and will act as a support for the telescope and spacecraft.

What will the space telescope do?

The telescope will answer questions about our solar system, study exoplanets in new ways and peer deeper into the universe than we’ve ever been able to.

The telescope was named for former NASA administrator James Webb, who ran the agency during the Space Race from February 1961 to October 1968. NASA officials said that while Webb is linked to the Apollo program, he also supported the agency’s balance of human space flight and science.
Each telescope builds on the knowledge gained from the previous one. In the case of James Webb, its mirror is 50 times larger than previous space telescopes — like the recently retired Spitzer Space Telescope — and it can observe even deeper into the universe.
Spitzer, as well as NASA’s ongoing planet-hunting Transiting Exoplanet Survey Satellite (TESS) mission, have helped scientists establish targets for follow-up by Webb, including some of Spitzer’s “greatest hits.”
For example, in February 2017 astronomers announced their discovery of seven Earth-size planets orbiting a star 40 light-years from Earth. With Spitzer’s help, the seven exoplanets were all found in tight formation around an ultracool dwarf star called TRAPPIST-1.
The planets all bear the TRAPPIST name — which the researchers borrowed from their favorite beer.
Some of the planned targets for Webb include TRAPPIST-1b and TRAPPIST-1e, which could support liquid water on their surfaces. Finding water could suggest the potential for life as well. Another planned target for early in the mission is WASP-18b, a blazing hot Jupiter with an atmosphere, according to NASA.

Webb is also well-equipped to shed light on the mysteries of planet formation. Building off Spitzer’s work studying brown dwarfs — objects that are too large to be planets but too small to be stars — Webb can take a closer look at their cloud properties.

Spitzer was known for looking deep into the universe, studying galaxies that formed in the early days of the Big Bang. Webb is more sensitive, so it will be able to peer back even further.

“We’ll be able to see some of the earliest galaxies to form in the universe that we’ve never seen before,” said Amber Straughn, deputy project scientist for James Webb Space Telescope Science Communications.