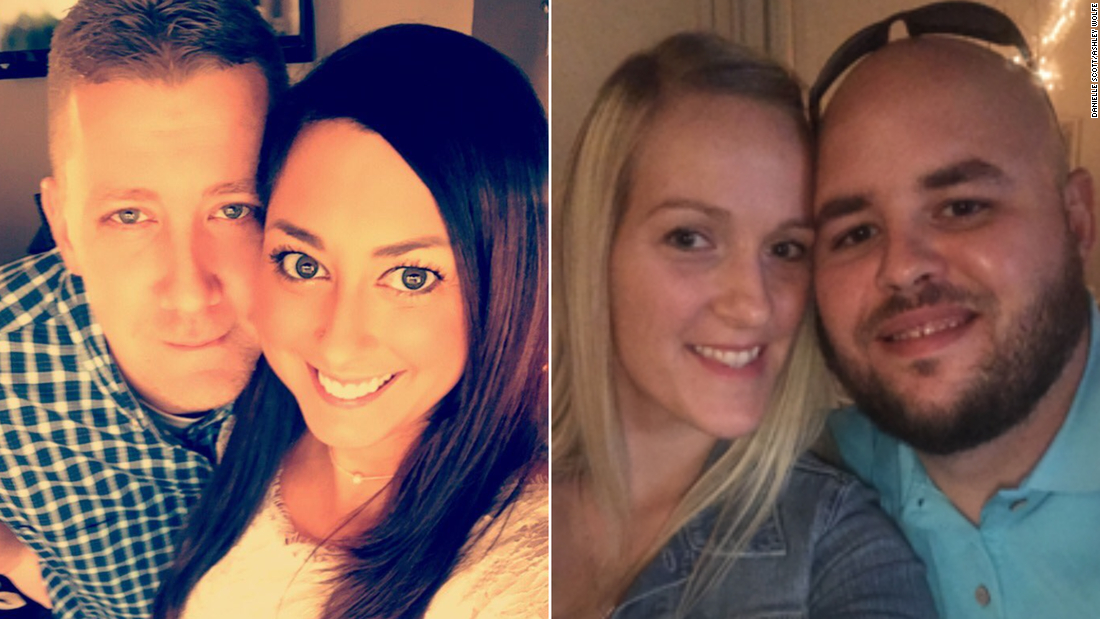 Danielle, who is 34, had a hysterectomy after being diagnosed with stage three ovarian cancer in 2013. Kenny was right by her side, despite the fact that they had only been dating three weeks at the time of her diagnosis.

Seven years later, the now-married couple, from Terre Haute, Indiana, is trying to conceive via surrogate. Two surrogates did not pan out. But with their third surrogate, they were hopeful.

Until last week, when the coronavirus pandemic put everything — including their fertility treatments — on hold.

For couples struggling with infertility, the IVF process is already an emotional journey. Now, many women, including Danielle Scott, are finding out their fertility treatments are being postponed as health workers are called to the frontlines to help treat coronavirus .

“It just sucks,” Danielle Scott told CNN. “That day (I found out about postponing the procedure), I was at work when they called, it was like 7 p.m. I cried the whole way home and to sleep.”

It is unknown what impact Covid-19 has on fertility, pregnancy and transmission patterns, ASRM said, and the guidelines are meant to guard the health of patients and health care workers.

While the impacted families said they know safety must be a priority amid coronavirus concerns, the reality of having to wait for a new addition to their family has made them more anxious.

‘One big wait together’

Patients that are still “in-cycle” should still continue to be monitored, and physicians should minimize in-person visits, ASRM said. The organization said it will be revisiting its guidelines no later than March 30.

Some women are now worried about how an unknown delay in their procedures will impact their chances of having a baby. Others wonder if they will be able to start the treatments over again.

Alex Von Eschen, who is a special education teacher, found out her IVF would be put on hold while she was the hospital getting her pre-operation paperwork done for her upcoming procedure.

“I was definitely disappointed,” Von Eschen, who is 34, told CNN. “It’s tough to mentally prepare yourself for (IVF).”

Before even starting IVF, the Minneapolis resident was scheduled to have a hysteroscopy, a procedure to remove uterine polyps.

“I feel like right now the world is holding its breath,” she told CNN. “We are in one big wait together. Because we have gone through infertility and so use to uncertainty, I think we’ve coped with this change in life a little better.”

News of the delay was even more disappointing for Von Eschen and her husband, David, because they had saved up for months to cover the treatments. The average cost of a single IVF cycle in the US $12,400, according to ASRM.

They had aimed for April 1 as the start date for their first cycle of IVF treatments. Now their timeline is unclear.

‘Devastating’ to hear about treatment cancellation

Like the Scotts, Ashley and Paul Wolfe were scheduled to have their embryo transfer this week.

But then Ashley Wolfe, 33, received a call from her doctor the night before her last ultrasound appointment that the transfer would need to be rescheduled.

“It has been devastating,” Ashley Wolfe told CNN. “It sounds dramatic using that word but when your entire life is consumed by appointments, blood work almost every other day, injecting yourself with tons of hormones, spending thousands, missing work for appointments — just to hear, ‘we are canceling you and don’t know when we can proceed’ … It is mentally draining.”

The Wolfe’s have been trying for a year and a half to have a baby, and this was their third round of treatments. The embryo transfer is the last step in the IVF process and has a 41 to 43% success rate for women under age 35, according to the American Pregnancy Association.

Ashley Wolfe, who is a nurse at a gastroenterology clinic in Buffalo, New York, has seen firsthand the impact that the pandemic has had in the medical industry. She said her office has been implementing video and phone appointments to help their patients.

still, the 33-year-old said she is conflicted over the ASMR’s guidelines to postpone procedures, since she feels there isn’t “valid research” around coronavirus and pregnancy.

“They are our embryos, our money,” she said. “I feel especially because we were so close we should have been given a choice.”

Now she said she is working on accepting that her baby journey is on pause for now.

“Its like a death,” she said. “You are sad, then angry, then in denial, and hopefully with time you accept it. I just don’t see the accepting part coming any time soon.”