It’s unlikely we’ll have a coronavirus vaccine by October 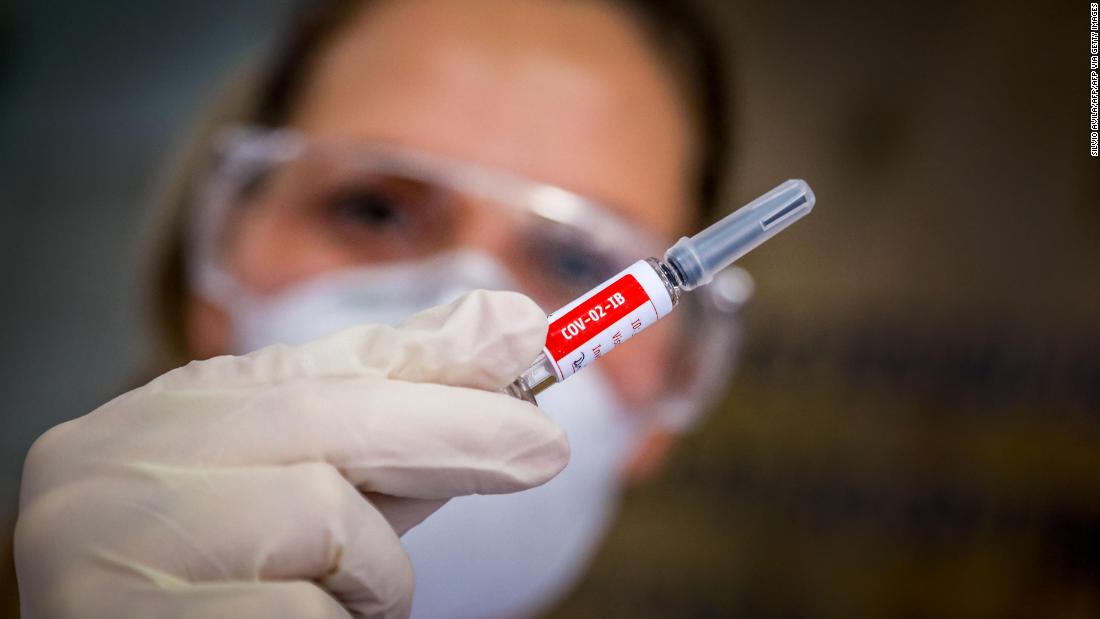 Doctors who are running the clinical trials would know best, and they don’t think so.

“Do the simple math,” said Dr. Larry Corey of the Fred Hutchinson Cancer Research Center in Seattle, who is leading the team coordinating the clinical trials for federally backed coronavirus vaccines in the US.

“We designed the trial to get to 130, 140 endpoints seven months from starting the trial,” Corey told CNN. “The first one started in mid-July.”

“Endpoints” are coronavirus infections. What Corey is saying is that the trials are designed to go on until 140 or 150 people catch the coronavirus. The researchers would look to see if people who got the real vaccine were less likely to be among those infected.

But if you add seven months to July, you get February.

That doesn’t mean it’s impossible to have an answer before then. If one of the vaccines being tested is highly effective, and there is a high rate of infection among the people volunteering in the trials, it’s possible many people who got placebo shots would get infected quickly. “If you had a highly effective vaccine, maybe you’d find that five months from designing the trial,” Corey said.

But if you add five months to July, you get December.

That still doesn’t get us to October.

And there are other obstacles. Dr. Paul Offit, director of the Vaccine Education Center at Children’s Hospital of Philadelphia and a member of the Food and Drug Administration’s Vaccine and Related Biological Products Advisory Committee, said most of the Phase 3 trials underway now aim to enroll 30,000 people each. That’s because the people who designed the trials think it will take that many volunteers for them to see 140 or 150 infections.

None is fully enrolled yet, so it’s already September and many, if not most, of the volunteers have yet to receive their first dose.

The vaccines in advanced, Phase 3 trials all require two doses, given one month apart. So people who received their first dose in August could not be given a second dose until September. And those receiving vaccines this month won’t get their second dose until October.

“Then you have to wait two weeks after the second dose to really have full immunity,” Offit told CNN.

A highly unlikely — but not impossible — timeline

So why is the administration talking about results in November, or even October?

“It’s highly unlikely, but it is theoretically possible without doing anything nefarious,” said Dr. Ann Falsey, a professor of medicine at the University of Rochester School of Medicine in New York, who is coordinating the clinical trial there for AstraZeneca’s candidate coronavirus vaccine.

For instance, if the virus is spreading fast, that would make for a lot of data, very fast. “Unfortunately, there may be a real hotspot and there may be a lot of activity,” Falsey told CNN.

And if one of the vaccines being tested is highly effective, it would quickly become clear. People in the placebo group will get infected at a much higher rate than people who got the real vaccine.

“So maybe you get to a definitive answer sooner than you thought you would,” she said. “That would be unlikely,” she added.

Offit agreed. The trials are not designed to detect symptomless or mild infections, Offit said. “The clinical endpoint is severe disease,” he said. That makes it even less likely the trials are going to produce a lot of surprise data ahead of schedule.

And the FDA has already told companies a vaccine has to be at least 50% effective to be considered. That means it will have to lower the risk of death or severe disease by 50%.

Even if volunteers are in a virus hotspot, Offit said, they will have been counseled to be careful. It is an ethical requirement of the trials to caution the volunteers about the risks of becoming infected. “You are telling people to wear face masks and social distance,” he said.

“You are not telling them to go to a maskless biker’s convention in South Dakota. You want them to protect themselves.”

The FDA can’t move faster than the data

Normally, the FDA takes a year to approve a vaccine after all the Phase 3 data is submitted, Offit said. An expedited process would take 10 months.

In the case of a pandemic, that process is accelerated, and Operation Warp Speed has been running other needed steps in parallel with the clinical trials, helping companies start manufacturing vaccines even before the trials are over and ordering syringes and other equipment now instead of waiting until the trials are finished, so the FDA could be ready to move much, much sooner.

But the only way there would be enough data to move one of the vaccines in the queue for FDA emergency use authorization would be if one or more of the trials got a surprising amount of data very, very quickly.

Pfizer Chairman and Chief Executive Officer Dr. Albert Bourla thinks that could happen. He said the Phase 3 clinical trial of his company’s Covid-19 vaccine has enrolled about 23,000 participants, and some are already getting the second dose of the vaccine.

Pfizer “should be able to have enough events to say if the product works or not” by the end of October, Bourla said Thursday in remarks to to the International Federation of Pharmaceutical Manufacturers and Associations.

“They are there to protect the safety and to define the accuracy of the vaccine,” Corey said.

And they can stop the trial if it looks like the vaccine is working better than expected. That’s why the CDC is asking states to be ready to distribute a vaccine in October or November, Health and Human Services Secretary Alex Azar told CBS This Morning.

“God forbid we get great data and it comes out of the Data and Safety Monitoring Board and the FDA finds that it meets their standards, and we aren’t ready to distribute,” Azar said. “We need to be ready for all contingencies and that’s why the CDC is doing this.”

Corey said he doubted anyone on the DSMB would feel any pressure to stop a trial and recommend a FDA review because of pressure — either political pressure or just the pressure of trying to end a pandemic that has killed 185,000 Americans.

“It’s not like they don’t understand the responsibility. All of them know how to read,” Corey said.

Falsey doesn’t think so, either.

“I don’t think that the message is that we are going to look at the data in the middle of the trial and if it looks kind of good, we’ll go with it,” Falsey said. If a vaccine gets fast tracked, it will be because there is definitive evidence, she said.

Offit agrees. He said he trusts the FDA and the approval process. But not everyone does.

“The irony of this is you may, by the end of the year, have a safe vaccine. But you have an administration that hasn’t garnered a lot of trust,” he said.

“Maybe we will have a safe and effective vaccine but people still won’t trust it because they don’t trust the way the administration has handled science. That would be the ultimate irony.”