International Dance Day: Top dancers are teaching us to dance at home 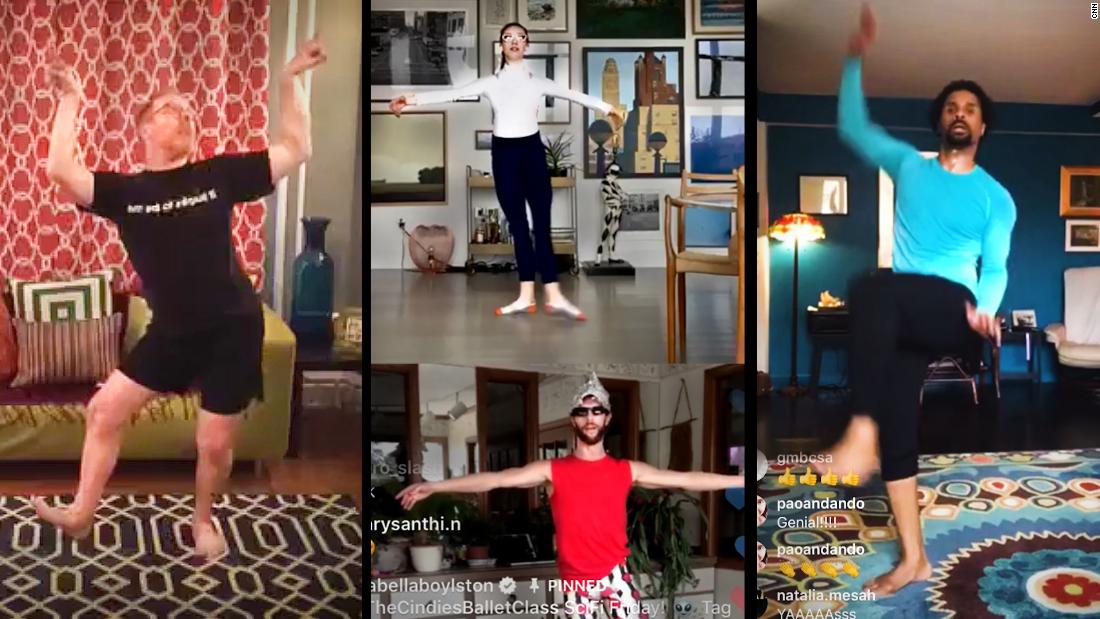 I said sure, but not right away.

“I have to take my musical theater dance class first,” I added.

A few dozen of us Noffke followers shrugged anxiety off our shoulders, snapped our super-dry fingers to the beat and flicked our toes as Idina Menzel asked us poor souls, “Don’t you want to be the life of the party?” (It’s from Andrew Lippa’s Broadway smash hit or whatever, “The Wild Party.”)

Oh, Idina! Any party, virtual or real, will do at this point.

Noffke is one of a flock of dancers and instructors around the world who are hosting a tidal wave of weekly dance classes on Facebook, Zoom and Instagram Live. Most are free or only request a donation, even though Noffke and other class teachers are often out of work.

Noffke said his class gives him a creative outlet during a difficult time.

“I wasn’t ready to shut the door and just, you know, go under the sheets,” Noffke said. “I look forward to that hour that I get to spend with all these people.”

This pandemic is giving both non-dancers and dancers the chance to learn from the industry’s top professionals without worrying about a class schedule or your own schedule. Fans don’t need to pony up $20 per class (although donations are welcome) and no one needs talent or ability or previous training.

That’s even true if you’re dancing (in your living room) with the world’s premiere ballet companies.

“Dance like no one’s watching,” said Whiteside, repeating common dance advice. “And nobody is, because you’re in your living room.”

Boylston said their first class brought in nearly 17,000 viewers, which she pointed out is four times the size of the audience they get when performing one night at the Metropolitan Opera House. The class is best if you do know a bit of ballet terminology, but it doesn’t hurt to try it anyway. They use the classes to raise money for different organizations, and their favorite is their own ABT Crisis Relief Fund.

Dancing is good for you

Everyone is even more dangerously sedentary than usual right now, all missing out on those crucial walking meetings and walks to and from the office cafeteria. While you could go for a jog, science shows that dance has added benefits.

“If you’re not a dancer and you start taking some dance classes, you might see really a spike in your gray matter in your brain,” said Terry Ferebbe Eckmann, department chair of the teacher education and kinesiology department at Minot State University. “You are waking up new neurons and making new connections that you haven’t made before.”

Eckmann and her colleagues published a study (PDF) last fall showing that 37 women past retirement age who took Zumba or YogaFit for 12 weeks significantly increased their cognitive function.

“Our oldest participant in the Zumba group was 91,” said Eckmann. “And it just showed that, wow, this really woke things up in that person’s brain.”

Dance requires you to mimic what the teacher is not just saying but doing, Eckmann said. That demands that multiple parts of the brain work together with the body.

You’re also getting your blood pumping and learning new dance combinations, all while listening to mood-boosting music. Lavinia Teixeira Machado studies dance’s positive effects on autism and conditions like cerebral palsy as a professor in the department of health education at Universidade Federal de Sergipe in Brazil. She also looks at its cultural importance.

“I would like to emphasize that dance and music probably evolved as ways to generate rhythm,” Teixeira Machado said.”But dance goes far beyond that: It has the capacity to transmit ideas.”

“It forces you to just like concentrate on your body and on the present moment, and it gives you endorphins,” Boylston said. “So, I feel like if you do a little bit of movement every day, your anxiety may be diminished significantly.”

How to find the party and the dance classes

Atlanta writer Dana Hudepohl found an online class that Alvin Ailey teacher Lanaya Straker, aka TweetBoogie, was teaching, and she shared it with her 12-year-old.

When she saw her daughter learning Alvin Ailey dance moves, Hudepohl decided to join in. The routine became a fun way to challenge her Ohio-based sister and niece to learn the same dance, battling each other through video.

“My daughter was very impressed to see a side of me she hadn’t seen before,” Hudepohl said. “Once I had the dance down and could perform it from start to finish, it felt like so much fun.”

She’d previously tried in-person adult beginner ballet classes and found them not “beginner” enough to follow along without feeling self-conscious. (That’s common and often happened to me, too.)

Going online freed Hudepohl — and me — from our self-consciousness.

No one can see your two left feet

Right now, no one can see your flubs as you study with Alvin Ailey, New York City Ballet, LA’s Millennium Dance Complex or choreographer Sienna Lyons.

If using Zoom, turn your own camera on only if you want to, but I suggest you do, as no one will pay attention to you individually and it’s fun to see everyone.

For free or donation-based classes, head to the Instagram accounts of Dancing.Alone.Together or Free.Dance.Training, which send out a near-hourly list of daily classes offered by individual dancers and smaller companies.
That’s how I started my absolute obsession with Sienna Lyons, who’s worked with JLo and Janet Jackson and whose “heels classes” have me strutting around my living room to songs like En Vogue’s “Free Your Mind.”
Can’t even find the beat? Head to Debbie Allen’s Instagram page for super-easy hip-hop and funk classes — yes, that Debbie Allen of “Fame” fame.

Once you find a school or teacher you like, check his or her Instagram story daily because new collaborations and classes pop up all the time. Don’t forget your local neighborhood studio.

Time to learn (or perfect) that Latin dance

Another of my favorites is Ballet Hispanico. Rodney Hamilton, the company’s BHdos rehearsal director, said Ballet Hispanico’s school offers LatinX classes for people at all levels. The best calorie burn I’ve gotten ever was with its salsa class, where I was twisting my waist for a full hour.

“You are going to get a good workout,” said Hamilton, laughing. “We have a lot going on, and you know, there’s a lot needed.”

Ballet Hispanico has “Take Back Tuesdays,” “Wepa Wednesdays” and even a weekly watch party. It’s a lot, but it’s nothing compared to what the company had planned for what was to be its celebratory 50th anniversary year.

“The problem is that the arts get hit hardest,” said Ballet Hispanico Artistic Director and CEO Eduardo Vilaro said.

The school encourages and needs donations, but Vilaro said the social media classes fulfill their primary purpose of engaging the public with LatinX dance.

Ballet Hispanico is continuing that mission even though it’s financially struggling because it couldn’t secure any bailout funds. Like all dance companies, it’ll lose all the revenue it would have gained with fundraisers and performances.

Vilaro argued out that our country’s leadership doesn’t see arts as important as they should. “But meanwhile, the arts are what’s keeping the human connection alive in social media,” Vilaro said. “It’s remarkable. It’s quite a conundrum.”

Things to know before your dance class starts

Lyons partnered with choreographers Jessica Castro, Cat Rendic and Liana Blackburn for a special collaborative class that raised money for World Central Kitchen. I joined in.

Early on, I shared online dance class links with my friend Jessica Taube, who lives in New Jersey with her husband and kids ages 3 and 7 years old. She took the recorded classes around 5 a.m. before her kids are awake and “all over” her. “I can’t do a push-up cause they’re on me,” she said.

“It’s nice to be able to commit to be able to try different things without committing to a $20 (class) fee and a subway ride,” she said. “It’s not just about the exercise. It’s about your mood, your spirit … your soul.”

Like Taube, you can take advantage of recorded classes. Instagram Live classes are often saved for 24 hours and accessed by clicking on the teacher’s Instagram Story button (and only accessible on the phone app).

Facebook videos are there forever unless deleted. Take advantage of recordings and repeat the same class over and over because even professionals don’t get it the first time. Getting the combo down will have you moving more and standing around puzzled less.

Find some space to dance

You also need to find some space, but that might be smaller than you think. (I get away with 6′ by 10′.) Warm up and stretch pre-class as online classes are shorter than real-life ones, and some will cut that out altogether. Kitchen counters make great ballet bars and so do the backs of dining chairs. Cheap, low-pile carpet is fine to spin on, but fluffy stuff will trip you up.

Don’t even attempt jumps or leaps. Your downstairs neighbor did nothing to deserve that, and your floor is not bouncy enough. Ballet dancers are usually leaping on “sprung floors” to protect their joints.

This is confusing but bear with me — remember Instagram and Facebook classes are “mirrored,” or automatically flipped. That means you can just mimic the teacher as if staring at their reflection.

Not so on Zoom. Zoom makes a teacher’s left side your right side, so I just ignore the idea of “sides” altogether and pretend Zoom has figured out mirroring when it hasn’t (hint, hint).

The power of dance

This mass movement of dance classes is powerful, helping to save dance studios — and even changing the dance world post coronavirus. My friend Noffke said this powerful tool may affect how classes are held in the future and even how auditions are performed. He doesn’t plan to stop teaching, either.

“There are so many people just even in my circle of life who aren’t in the business anymore who get such a kick out of it,” Noffke said. “I wouldn’t want to take that away. That’s like saying here’s $100, but you know, I have to have it back tomorrow.”