How to talk to your neighbors about social distancing 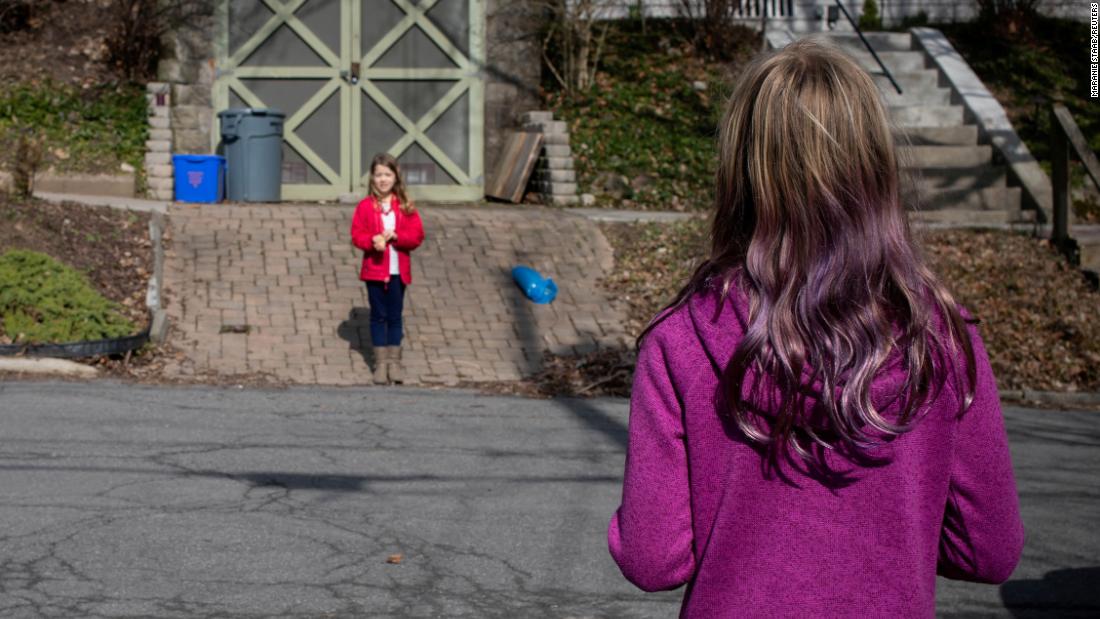 There he was, mere blocks from his home in South Pasadena, California, walking with his wife and teenage son, when a mask-wearing, dog-walking neighbor stopped to chat.

Standing at least 10 feet apart, the foursome loosely held court for about five minutes on the grass in front of the local library, catching up on the state of the world and the challenges of homeschooling.

Then the yelling began.

The screams came from another neighbor — an older woman Quezada did not recognize. On and on she prattled about social distancing. Calmly, Quezada explained that he, his wife and his son all lived in the same house. The woman turned her ire toward the dog walker, even though he was well beyond the 6-foot-minimum guidelines laid out by the U.S. Centers for Disease Control and Prevention.

“She shrugged and looked at us with disgust,” said Quezada, who has lived in the neighborhood for nearly two decades. “Under normal circumstances, I might have told her to mind her own business, but I understood she was concerned.”

Thankfully, the ugly incident petered out after a series of disgusted looks. Still, it was uncomfortable, unfortunate and awkward for everyone involved.

Interactions like this one are becoming commonplace these days, sparked largely by a difference of opinions on social distancing recommendations across the country. As states begin to relax certain rules about who can go where, when and how, neighbors who once got along peacefully now are experiencing and exacerbating tensions over simple choices that could — at least in theory — put everyone in the community at risk.

Debts to each other

We’ve all been guilty of bad choices over the last two months.

Someone hosts an impromptu wine party on the street corner, and you rant passive-aggressively on Facebook or Twitter. Someone checks the neighborhood mailbox without a mask on, and you mutter a frightened epithet under your breath. Someone disregards citywide park closures to shoot hoops, and maybe you even call the cops.

On some level, these actions and reactions are understandable in the face of an existential threat and after two months of sheltering in place.

Yet ethicists, medical anthropologists, etiquette experts and lawyers agree that many of the scenes playing out in neighborhoods across America challenge the very notion of what it means to be neighborly in the first place.

“This is a time for more empathy, more understanding that everyone is stressed out and probably not at their best,” said Arthur L. Caplan, the Drs. William F. and Virginia Connolly Mitty Professor of Bioethics and founding head of the Division of Medical Ethics at the New York University School of Medicine in New York City.

“None of us has experience living through a situation like this one. We’re all scared. As cliched as it might sound, we really are in this together.”

As Caplan saw it, each of us has two ethical obligations in these times: One is to protect ourselves, our families and our respective communities. The other is to reduce the burden on the health care system long enough to allow experts to develop medicinal treatment that can bridge the gap to a vaccine.

Despite the magnitude of these challenges, he said it’s important to remember we can only control our own actions.

“You can’t force someone to do something they’re not doing on their own,” he said. “Even if you happen to be an expert in public health, anything that makes you sound more righteous than the next person is not the way to go.”

One of the reasons we shouldn’t chastise neighbors for the way they’re distancing: We can never assume why they aren’t implementing recommended health behaviors.

It’s easy to jump to conclusions at a time when fear and uncertainty surround us, said Monica Schoch-Spana, senior scholar at the Johns Hopkins Center for Health Security in Baltimore. But that denying neighbors this important context is unfair, unjust and unfriendly, she said.

“You have to be careful about passing judgment,” said Schoch-Spana, who specializes in medical anthropology and doubles as a senior scientist in the department of environmental health and engineering at the Johns Hopkins University Bloomberg School of Public Health. “Most people want to do what they perceive to be the right thing — they just need the information that allows them to do it and the opportunity to put that information into action.”

Schoch-Spana said this philosophy becomes challenging when perceptions are at odds with facts.

She cited recent protests in Georgia, Wisconsin, Pennsylvania and other states as examples of what can happen as a result of this conundrum.

“There’s a middle ground between months of lockdown and ‘back to business as usual,’ and I don’t think we’re giving enough guidance about navigating these gray areas,” she said.

“Public health has to do better about being behaviorally realistic at the same time that people are allowed to make thoughtful risk-benefit analyses about the situations in which they find themselves.”

How to say what you want to say

How you couch your sentiments also can make a huge difference.

Stuart G. Finder, director of the Center for Healthcare Ethics at Cedars-Sinai Medical Center in Los Angeles, said that instead of calling out a neighbor and humiliating them for what they’re doing, it’s more effective to share how you try to practice distancing yourself.

“Instead of, ‘You idiot,’ you might try to say something like, ‘I always try to stay 6 feet from everyone when I’m out and about,’ or ‘Excuse me, would it be OK if you backed up a little bit? I’m just making sure we’re all safe,'” he said.

“Putting the emphasis on the shared experience, on the fact that we’re all going through the same situation at this moment in history, helps emphasize the humanity of it all.”

Finder added that he preferred the phrase “physical distancing” over “social distancing,” since it preserves the notion that shared experiences as social beings keep us connected in times of crisis.
Elaine Swann, etiquette expert and founder of the Swann School of Protocol in Carlsbad, California, agreed. For Swann, the middle of a pandemic is not the time to be alienating people on whom you may need to rely down the road.

“One of the things we have to think about is the fact that these are our neighbors, that we live near them and we may run into them again,” she said. “Unless we’re talking about something so bad it’s just plain crazy, you have to be mindful of the relational issue that exists when we approach the people who live next door.”

Lisa Mirza Grotts, a 20-year veteran of the etiquette business who dubs herself the Golden Rules Gal, said that even if you’re vexed about something a neighbor has done, even if you’re feeling threatened by the potential ramifications of a neighbor’s decision, it’s important to give that person the benefit of the doubt.

“Kindness is always possible, even when you’re annoyed with your neighbor for having a party of 20 people who didn’t wear masks,” said Grotts, who is based in San Francisco. “How you choose to behave is entirely up to you.”

With all of this in mind, is it ever appropriate to call the police about a neighbor’s social distancing faux pas? That depends on whom you ask.

Aziza Ahmed, a professor of law at Northeastern University in Boston, said what while some state shelter-in-place orders specify fines and incarceration for violations, each state can choose how strictly to enforce the rules.

Legal experts seem hesitant to determine certain violations as illicit if the actions do not cause harm to others, she added.

“If there’s a single person using the park, and there’s nobody else there, I would hesitate to say we should be policing each other’s behavior,” she said.

Ahmed also noted that even though citizens have the right to call the police on someone violating a shelter-in-place order, doing so could potentially tax police resources needed elsewhere. Additionally, it could end up getting the offender wrapped up in a criminal justice system that puts the community at greater risk.

Other cities across the United States — from Davenport, Iowa, to Portland, Oregon — have seen spikes, too.

Some cities, desperate to keep police crews free to respond to more pressing legal matters, proactively have tried to minimize the reasons for residents taking matters into their own hands.

In Seattle, for example, following a warm weekend during which residents overcrowded city parks, the Parks and Recreation department established the Social Distancing Ambassador program to remind the public of social distancing guidelines.

Cornell Amaya, a spokesperson for the city, said there are 60 ambassadors in all, and that ambassadors are staff members who have been reassigned from other positions within Seattle Parks and Recreation.

“We continue to get the word out that in order to keeps parks open we need to practice appropriate social distancing,” Amaya wrote in a recent email.

At the end of the day, know your limits. If you are out and about and you encounter someone who is not responding to kind suggestions for appropriate distancing, seek a manager with whom you can share concerns as quietly and carefully as possible.

Just ask Sheana Davis, who had her own distancing issues on a recent trip to her neighborhood deli in Sonoma, California.

Davis rolled in on a weekday to pick up some sandwiches and found herself in line behind a group of men who were neither wearing masks nor social distancing. In fact, the men were practically on top of each other. Davis became uncomfortable almost immediately.

Instead of saying something to the men, all of whom were much larger than she, Davis asked to speak to the store owner. When he came out, she informed him of her concerns and quietly demanded a refund.

The owner was taken aback by her request, and he struggled to respond. Ultimately, he gave her the refund and thanked her for the heads-up. A sheriff who came in on his lunch break asked the men to leave.

“After talking to [the owner], [I realized] he was just trying to earn a living,” she said. “My requests made him think. In this crazy time, that’s all you can ask for.”