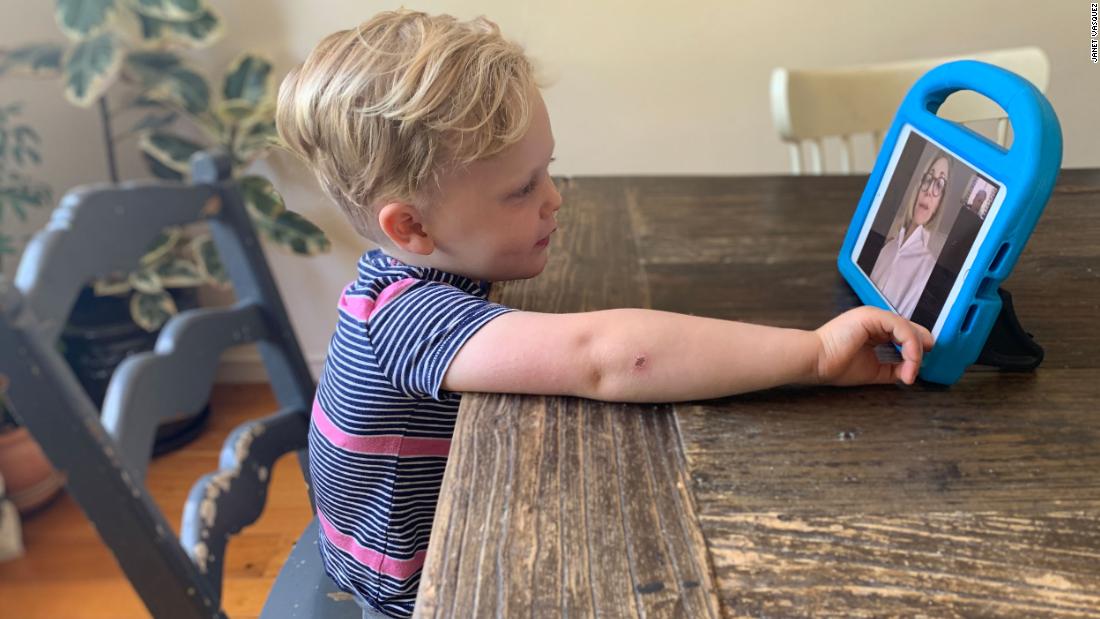 He loved his teachers and classmates, but up until now those relationships had been entirely, and developmentally appropriately, in real life.

Sure, there was a lot of talking at school, but the special sauce of his relationships was non-verbal. That came from all the hugs, collaborative games, group singing, lap sitting and toy sharing.

Now my son was going to have to maintain his relationships with his peers, teachers and grandparents through a medium that allowed for essentially none of that.

As expected, his initial foray into online relationships generated a lot of blank stares and compulsive gadget fidgeting. But over the past few months, I’ve watched him evolve into someone who can be engaged, and engage others, online.

While not a replacement for what he’s missing, experts have said he and other preschoolers can, and, when possible, should, be maintaining some of their IRL relationships online. It’s good for their psychological well-being and that of the grown-ups who adore them.

When our children feel better, we feel better. And in these difficult times, as we grapple with the pandemic and racial injustice, we could all use a small dose of better.

The benefits of a virtual connection for preschoolers

“Virtual programming is not a substitute for school, but it is a good stand-in for connection,” said Tovah Klein, director of the Center for Toddler Development and adjunct associate professor of psychology at Barnard College and author of “How Toddlers Thrive.”

Online interactions “allow them to see that their teachers are still here, their friends are still here and their grandma and grandpa are still here. This relationship piece is very important for young children. It is the grounding of safety and security and trust.”

The benefits increase when the connection takes place as part of a familiar (or if new) regular routine, Klein said. This reinforces the consistency piece for children, allowing them to consciously or subconsciously connect yesterday to today.

Here’s how it works in my home: Every weekday morning, my son has his regular preschool morning circle — on Zoom. Same songs, same people and even the same stuffed animals. The kids have improvised a tradition of their own in which they all show off the loveys they used to bring to school.

Then, around lunchtime, it’s reading and music with Grandma Sally, across the country in Massachusetts. Together they pick a book to read on Epic, a digital library for kids, which allows her to flip through the pages digitally. After their reading time, the music-loving child picks a song or two for Grandma to play on the cello. The “ABC” song is in heavy rotation, as well as some of the Bach cello suites.

For kids this age, who, paradoxically, lack a concrete sense of time and yet have emotional lives whose well-being depends on routine, such standing appointments provide a sense of security.

“Just being able to see someone they know, and do normal things with them, can become a really nice ritual” for preschoolers, Klein said. “It’s not the same as being together, but it is a bridge until the time comes when we can be together.”

Also, while there is no question that this is less than ideal, they can still learn.

In recent years, researchers and experts have changed their attitudes toward video chats, separating them out from the often maligned “screen time.” The American Academy of Pediatrics now acknowledges the value of video chats for children of all ages, explaining that any “back-and-forth” engagements are good for language skills, even when through a screen.

Toddlers (ages 1 to 3) can expand their vocabularies through virtual engagement, studies have found.

Children who are interacting with familiar faces can also take away social lessons from video chats, according to Dr. Michael Rich, director of the Center on Media and Child Health at Boston Children’s Hospital and associate professor of pediatrics at Harvard Medical School.

“If there is already a relationship, and the child has a real life connection to that person, then the engagement can create social capital,” Rich said.

The interaction becomes even more meaningful if parents debrief with their children afterward. Ask your kids how they think the conversation with their relative, teacher or classmates went. Did they like it? Were they confused? Or do they think Grandma liked it? The last one will help them flex their very important empathy muscles.

“Explore the residual of that conversation, or morning circle,” Rich said, “and help them process and reflect on it.

“If you can get them to understand the interaction, you are helping them build a worthwhile habit that will serve them now, and when we get back to whatever it is the new normal will be.”

Anyone interested in connecting with a young child online must remember one cardinal rule: Their attention spans aren’t terribly long and they’re not particularly interested in conversation for conversation’s sake. Unlike your adult friends, it’s not a good idea to simply call them up and expect an easy repartee.

Jill Rosenthal, co-director of Gan Avraham preschool in Oakland, California, has creatively managed to keep my son’s attention for the past few months. She said her school’s approach to online engagement has involved a lot of trial and error.

“What it has really come down to is figuring out how to create shared experiences. You don’t want to be talking at children — especially online,” she said.

Among lessons learned are to mix group settings with one-on-one interactions through messaging apps and even snail mail; to create different offerings that cater to different interests (think hopscotch, music, outdoor explorations and story time); and to set the stage in advance.

“For young children, you need a plan before you engage online,” she said.

Or, a teacher and a student or a group of students could all plan on building something out of Magna-Tiles while on video chat and show each other what they built.

One of my son’s favorite online preschool activities was when a teacher placed various items under a cloth napkin and then made one “disappear” when she lifted up the napkin. The kids had to guess what was missing. He re-created this game himself for weeks after, feeling connected to his school and friends, proud of his new party trick and having fun in the process.

Speaking of fun, adults should try to have some, too.

“Let’s not forget that grandparents and teachers should also feel a degree of gratification,” Rosenthal said. “If they can set it up in a way that there is engagement and connection for everyone, then everyone is going to benefit from it.”

Rich cautioned parents to keep it short, “a half hour is a long time for a 4-year-old.”

Also, decoding a human on video chat, while not without its benefits, can lead to cognitive overload in people of all ages, though especially kids who are still learning how to understand verbal and nonverbal communication. Lastly, do not think of the video chat as babysitting.

“This isn’t how to keep your kid busy so you can shower,” he said.

Instead, parents should observe their children’s response to the video chat so they can better understand what their child is and isn’t getting from it and how it might be improved.

Lastly, a tip from my mom, Grandma Jona, who lives about five hours south of us and has had to sustain a video chat-only relationship with my son for months now.

She’s learned that the most successful interactions with little kids tend to happen when the expectations are kept to a minimum. She and my son begin their calls with sweet and simple rituals. For example, a favorite one involves her showing him her lollipop jar and asking him to pick a flavor for the next time they see each other.

The longest conversations, and those that yield the most connection, are the ones in which she accepts whatever version of himself he is able to unfurl in that moment. He gets an adaptable conversation partner, and she gets a chance to delight in the marvelous spontaneity of her young grandchild. It’s a win-win.

Elissa Strauss is a regular contributor to CNN, where she writes about the politics and culture of parenthood. Her work has appeared in the New York Times, Slate, Glamour, Parents and elsewhere. Follow her on Twitter @elissaavery.