How ‘Oumuamua, first interstellar visitor to our solar system, may have formed 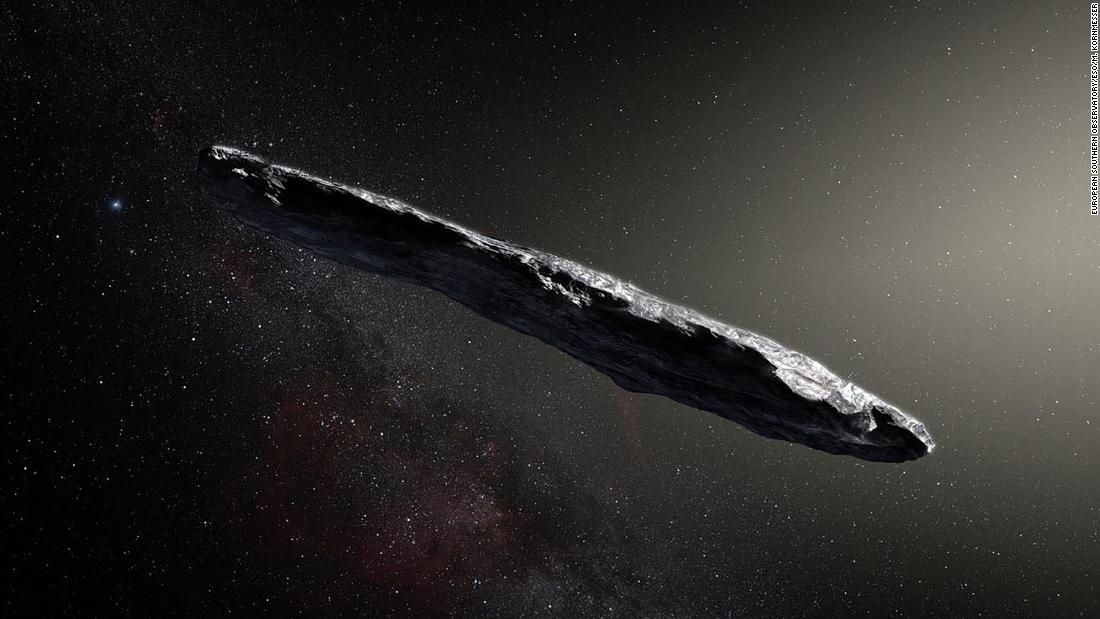 Astronomers scrambled to observe the object in October 2017 before it disappeared, and their observations caused more questions than answers about the “oddball.”

Now, researchers have used a computer simulation to determine how the object may have formed.

After discovery, the object was dubbed ‘Oumuamua, Hawaiian for “a messenger that reaches out from the distant past.” At first, astronomers expected that it was a comet because it was long believed that the first object spotted in our solar system that originated from outside of it would be one.

That’s because comets can be tossed out of their host systems through gravitational disturbances and they’re also very visible. The second interstellar object discovered in our solar system was an interstellar comet, 2I/Borisov, which was observed in 2019.

But the dry, rocky reddish, elongated cigar-shaped object had no cometary tail, and its tumbling motion couldn’t be explained. And debate has emerged over whether it’s an interstellar asteroid or comet.

And, of course, there was speculation that ‘Oumuamua was a type of alien probe.

So Yun Zhang, postdoctoral researcher at the Université Côte d’Azur and Douglas Lin, professor emeritus in the department of astronomy and astrophysics at the University of California, Santa Cruz, used simulations to show how they believe ‘Oumuamua formed.

The study, published Monday in the journal Nature Astronomy, postulated that ‘Oumuamua was once part of a planetary body in another solar system, ripped apart by its host star before being kicked out into space.

“The discovery of ‘Oumuamua implies that the population of rocky interstellar objects is much larger than we previously thought,” Zhang said. “On average, each planetary system should eject in total about a hundred trillion objects like ‘Oumuamua. We need to construct a very common scenario to produce this kind of object.”

Using simulations, Zhang and Lin modeled what would happen if a smaller planetary body came too close to its host star. They found that if the planet was close enough to the star, within 186,411 miles, it would be ripped into long pieces. Then, they would be shot out into interstellar space.

They also included thermal modeling to determine what would happen to the fragment split off from the planet. Elements like water, would melt on the surface of the object before re-condensing into a strong, stable crust as the object moved further away.

“[This] not only explains ‘Oumuamua’s surface colors and the absence of visible coma [comet tail], but also elucidates the inferred dryness of the interstellar population,” Zhang said.

Astronomers have wondered what is essentially powering the object forward. ‘Oumuamua doesn’t have the tail of a comet, but if condensed water existed on the object, it could be releasing and melting, accelerating the object in a comet-like way. This would explain its odd motions.

Based on their models, ‘Oumuamua could have originated from a half-mile-sized planetesimal, which is a precursor to a planet. Or it could have come from a rocky super-Earth exoplanet (larger than Earth), orbiting a low-mass star or white dwarf, which is the hot core of a star that has exhausted its energy.

Learning more about this object could prepare scientists to understand other interstellar objects as they pass through our solar system in the future. And given that they could originate in solar systems with potentially habitable planets, the information these objects carry is of great interest.

“This is a very new field. These interstellar objects could provide critical clues about how planetary systems form and evolve,” Zhang said.

“‘Oumuamua is just the tip of the iceberg,” Lin said. “We anticipate many more interstellar visitors with similar traits will be discovered by future observation with the forthcoming Vera C. Rubin Observatory.”

The Vera C. Rubin Observatory, named after the pioneering American astronomer, is located in Chile but run by America’s National Science Foundation. It will begin science operations in 2022. It is designed to map the Milky Way, explore dark energy and dark matter, survey the solar system and explore the transient sky.