How can we embrace race? Learn from this couple advocating for change 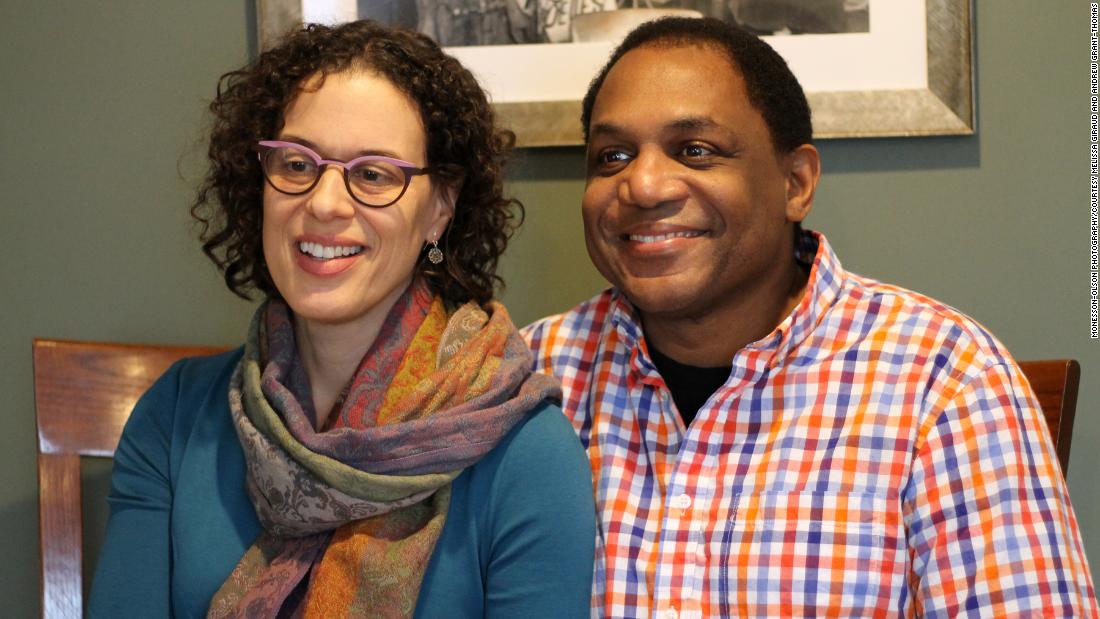 Married since 2002, they’ve been teaching families, educators and community members not just to talk about race, but to understand the dire reasons they need to come together to fight racism.

Giraud, who has worked as an educator and National Public Radio producer, is the biracial daughter of immigrants. Grant-Thomas, a Black man of Jamaican origin, born on the Fourth of July, is, as he put it, a “longtime racial justice guy.”

Melissa Giraud: In 2015, when our kids were in preschool, they were confronting some of the same things they would have confronted 50 years ago — things we confronted as kids — who’s valued at school, who’s in charge and who’s not, who’s represented in ads, books and movies.

We really wanted to find support, but articles for parents tended to be about how to talk to White kids about school shootings or Charlottesville. They didn’t discuss how to do it for kids from targeted groups.

We thought, if we’re having a hard time, having worked in racial justice for years, other parents must really be struggling to find resources. That’s when we started to imagine EmbraceRace.

Andrew Grant-Thomas: It became more apparent to us, in the context of President Trump and the way the conversation around race escalated, that our friends and teachers, other parents and we ourselves needed community as much we wanted resources. That’s what EmbraceRace became.

CNN: Why focus on parenting specifically?

Grant-Thomas: We thought about it two ways. We wanted to protect our brown-skinned girls, to fortify them for a world that often doesn’t value girls of color and support their possibilities for making change and influencing people.

We haven’t paid enough attention to how we nurture the rising generations to really make our multiracial democracy sing. We need to devote resources to this piece of the puzzle if we’re to have a different conversation in 20 years about the status of race in this country.

Giraud: Although racial bias and inequity is systemic and not simply about interpersonal interaction, we also create the systems. If you want to create better systems, you need to nurture better agents.

CNN: Can you talk about the “myth of racial innocence”?

Grant-Thomas: A lot of the existing work around kids’ racial learning is for educators, mostly middle and high school educators. But children’s sensibilities and attitudes about race start forming way before middle school.

At three months, six months, kids are able to distinguish hair texture and skin color and begin to show some preference toward the skin tone of their primary caregiver — for understandable reasons. That’s not racism, but racial discernment begins very, very early, and will turn into more sophisticated, suspect discernment.

A lot of parents, especially White parents, say, “I don’t want to stain my kids’ innocence by introducing this conversation.” But children aren’t racial innocents for long. And, actually, our kids have much less of a problem talking about race than we do — until we teach them that race is taboo. What if we deliberately engage kids on race early, while their attitudes are relatively malleable?

Giraud: This is a real deficiency in the racial education of so many Americans. You can run the country, a company or university without knowing anything about how race works.

The reality is so different from the story we all hear: “We’re a meritocracy. If you just work hard, nothing will hold you back.” There are a lot of adults who think that “You’re either a racist or not a racist,” when the truth is we’re all operating within racialized systems that favor some and disfavor others. Our kids need to be able to embrace that complexity.

CNN: What role does segregation play in both racial ignorance and racial discernment?

Grant-Thomas: Most of our homes, schools and social circles are segregated. The 2013 American Values Survey found that 91% of White Americans had only White friends. Black Americans’ friendships were only a bit more diverse. Latinx folks did a little better. Asian Americans had the most diverse circles.

If we’re not learning about each other through direct, intimate experiences, we’re more likely to accept whatever skewed stories about race reach us through popular culture. If parents and other adults aren’t inviting conversations about race, or are actively squashing them, and if there isn’t any color difference in the home, then there isn’t much occasion for kids to show that they’re registering race.

CNN: You mean that race doesn’t come up because people’s lives are so segregated?

Grant-Thomas: I guarantee you that fewer Black or Latinx families are insisting that their 3-year-olds don’t see race, in part because they don’t have the privilege of squelching the discussion, and in part because non-White people move through more diverse settings by necessity. And they’re more open to recognizing the racial references their kids do make.

Giraud: A kid of color operating in a community or household where people don’t talk about race, despite the obvious racial hierarchy you see, might think, “They think my race is so bad that they don’t want to talk about it.”

So many times growing up, people would start to ask me about my race and they then would stop short as if they didn’t want to insult me. They had learned not to talk about it. They had also learned that “White is normal.”

CNN: Many of us live practically, if not legally, segregated lives. How do we overcome that?

Giraud: It’s hard work to get over the deficiencies that segregation leaves us with, but you can change things around by the schools and cultural activities you choose. You need to be willing to go outside of your neighborhood.

Grant-Thomas: Everyone says they want diverse neighborhoods, but when White people say it, they often mean that they want an overwhelmingly White neighborhood with a few middle class or affluent Black or Brown families sprinkled in.

The question becomes: Who do my parents invite over to dinner? Who do they laugh and joke with? Who are the people we admire? What books are we reading, movies are we watching?

Giraud: When people say they can’t integrate their friend group because where they live is too segregated, I say: Do your kids know that you wish you didn’t live in such a White neighborhood? Do they know you struggle with living in a segregated society, with your own biases? Our kids, and we, need to learn to navigate these things rather than ignore them, to make the struggle part of the journey.

CNN: How has your work changed since the death of George Floyd?

Giraud: There are thousands more people coming to our site, and a lot more White people asking questions beyond “What should my kids say?” or “What should I say to my kid?” They’re asking, “What can we do? How can we change that?” They’re understanding that it’s systemic.

Grant-Thomas: There’s a lot more urgency to the conversation. It’s not just the White faces at protests or the swelling numbers on our email list or registrants in our webinars. A lot more White people are saying discrimination is a serious problem. That anti-Black racism is a problem. All the bigotry against Asian Americans under Covid, that Black and Latinx people and Native peoples are dying at greater numbers — it’s all registering now.

It’s by no means simply about George Floyd and police violence. More White Americans are saying that they can’t stand on the sidelines anymore, that maybe there aren’t even sidelines to stand on. That’s what gives me hope.

CNN: Talk about the importance of books about “kids of color just being themselves.”

Giraud: The books that get published about Black and Brown people tend to be “oppression books,” that detail real-life oppressions. Those stories — both contemporary and historical — are important, but we need books starring BIPOC (Black and Indigenous people of color) characters having everyday adventures or being heroes, too. Otherwise, kids learn pretty quickly, if there’s a picture of a Black person on it, it’s likely to be an oppression book. It’s bad for all kids that only slivers of BIPOC experience are seen in children’s books.

Literature can connect kids who are racially different but have similar interests. And kids of color need to see people who look like them, in books and movies, who have the full range of experiences, emotions and joy. All of that is really important to expose them to before they’re targeted.

Grant-Thomas: Books that feature BIPOC characters and communities in starring roles are important so BIPOC kids can see themselves. And guess what? White kids need those books, too!

CNN: You mentioned that you’d like the conversation to be different in 20 years. How so?

Grant-Thomas: We still tend to view race relations as a White/non-White thing. We’ll get much further if we understand race relations as multilateral, not bilateral. I’d love to see much more attention to how Asian American, Latinx and Black kids learn to see and interact with each other, for instance.

Another sign of success would be that integrated, diverse schools would be associated with educational excellence. To reading, writing, arithmetic, the three R’s of good education in this country, we’d add a fourth R: racial learning or even racial justice. Another would be that Americans, especially White Americans, have more integrated friend groups.

Imagine a critical mass of kids, of all racial stripes, who grow up with the racial sensibilities, tools and analyses to remake public education in this country, remake politics, rethink our health systems, reconsider who we care about and why.

If we can do that, that’s amazing. That’s profound. That’s transformative.