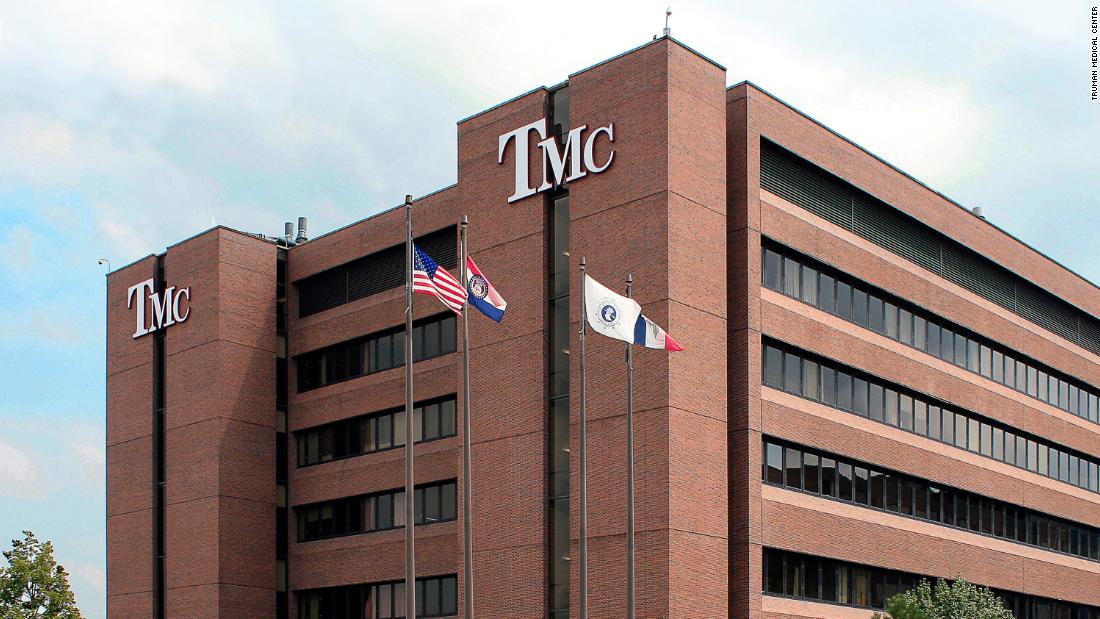 “It was beautiful and tragic all at the same time,” Kiehl said as the family saw their brother, father and grandfather alive, one last time.

Kiehl stood alongside several of her coworkers at the Kansas City, Missouri hospital helping with the same experience so multiple households could deliver their final goodbyes just before the man died.

The patient who died was living in the US without legal permission, according to his family Kiehl said, and he spent a week battling his symptoms in Truman Medical’s ICU with his condition rapidly deteriorating. No other details about the patient were provided due to medical privacy HIPAA laws.

The hospital didn’t have his medical history so providing a proper treatment plan was especially difficult, requiring those treating him to guess what — in addition to his viral Covid-19 symptoms — could be making him so sick.

“This person has a medical history; it’s just not written. It’s just not documented,” the 28-year-old Kiehl recalled her coworker saying during the man’s treatment.

Dealing with patients who present multiple chronic diseases isn’t new for hospitals like Truman Medical, which services majority lower income and minority communities. But the sheer volume of people has made caring for these particularly vulnerable patients more difficult.

Health care workers in Chicago, Kansas City, Missouri, and Flint, Michigan, spoke to CNN about how the everyday challenges they face, including language barriers, staffing turnover, and a patient population rife with chronic illness — some known, some unknown — have been exacerbated by an unforgiving virus.

Kiehl said she explained to the patient’s sister over video that these were his last moments. It was one of her hardest days since the pandemic started. The sister dutifully translated back to the rest of her family at their home, and she heard them praying in Spanish.

Visitors aren’t allowed in the hospitals to limit infection spreading, Kiehl added, so what would have been his last moments surrounded by loved ones was instead the man left to die alone, similar to other Covid-19 patients she’d seen since.

“It hit me that there are so many humans in hospital beds all across the nation surrounded by people that don’t speak their language,” she said.

When the patient was conscious early on, his caregivers communicated through four interpreters on staff or blue translator phones with two receivers and a translation service relaying messages between the two in order to limit exposure.

But Kiehl couldn’t help but think that despite these efforts, the language barrier and the necessary distance being used to keep staff safe was causing some thoughts to be lost.

“It’s truly and deeply heartbreaking knowing that there are most likely things being missed in their experience or in their requests that they might not be verbalizing out of fear of not being understood,” she added, describing a sense of helplessness that at times permeates over the staff.

Just before the end of Ian Gatton’s 12-hour shift at St. Bernard Hospital three weeks ago, the emergency room in the hospital on Chicago’s South Side was completely full.

About 25 people occupied every bed with the patients spilling out and lining the hallways.

The waiting room was also jam-packed with people hoping to see a doctor. But it didn’t end there. Within 45 minutes, a constant stream of 10 ambulances brought more.

“It’s kind of like a roller-coaster,” Gatton told CNN. “It doesn’t matter how busy you are. You still have to take the people that the Chicago Fire Department is bringing you.”

He added, “Everybody stayed late” because of their commitment to their work.

The registered nurse continued with his shift helping to triage the incoming patients — a majority with preexisting conditions like diabetes, hypertension or asthma, he said, while presenting flu-like symptoms.

Nearly 14 hours into his shift, Gatton finally felt he could leave.

The only hospital in Englewood, St. Bernard serves a neighborhood with a nearly all black population of about 25,000 people and nearly 60% of households making less than $25,000, according to federal statistics.

St. Bernard says it struggles to retain staff who often move on to hospitals with deeper pockets, including some that pay almost triple.

When nurses fall ill or present Covid-19 symptoms, the hospital’s options are limited. As a standalone hospital, it’s not able to transfer patients to less slammed facilities, Gatton said, adding that the city is not allowing hospitals to use ambulance bypass that would divert sick patients to other hospitals when its ER is at capacity.

“We are not able to pay those high dollars for salaries,” Yolanda Penny, director of nursing told CNN in an interview. Penny added that those workers who leave can make more at bigger hospitals or almost triple their earnings at nursing agencies.

“Trying to keep our staff engaged, committed to our mission for our hospital is a huge challenge for us.”

Starting from a deficit

In Flint, Michigan, Amy White, a registered nurse at McLaren Hospital said she was used to seeing a near equal split between white and black patients admitted to her ICU.

Since the pandemic, that has changed.

Now a majority of the patients are black. One reason, she believes, is because many of those patients didn’t have the luxury to stay at home and stay safe.

“They’re our store clerks, they’re our restaurant workers. Most of them are not sitting safe in an office, they’re in the community,” she said though she noted it’s hard to know whether income level or the prevalence of preexisting conditions is tilting the ICU population toward more black patients.

“Their chance of coming off (the ventilator) is a lot less than someone who doesn’t have all these comorbidities,” Indish said. “They definitely are sicker coming in than some hospitals that don’t see that type of population.”

Truman Medical, too, is a hospital who sees and services that population and bills itself as Kansas City’s essential hospital, functioning as the state’s safety net. The two-hospital system operates a large urban medical center with 250 beds in addition to another campus with 100 beds.

A substantial source of their income comes from federal programs; A total of 25% of its patients have no payer source, 40% use Medicaid and the rest are split between commercial insurance and Medicare. Last year, the hospital says it completed nearly $150 million in uncompensated care.

The hospital says before the pandemic, it already operated on lean margins. Now its revenue sources have vanished, because of the cancellation of elective surgeries and outpatient visits.

Charlie Shields, Truman Medical’s President and CEO said his system sees evidence that Covid-19 has disproportionally impacted black people, as they test at a rate of 9% positive vs. 2% for the white population — that’s out of about 1,600 people the hospital has tested so far.

Shields cited the inability for patients to get themselves to the hospital to get tested and lack of working lines of communication — like a reliable phone — to reach patients as some of the ongoing issues the hospital faces, now made worse by the pandemic.

The hospital also works with homeless patients who need a safe place to isolate as they await the results of their Covid-19 tests or recover following a positive test. It’s one of the many ways the virus is exposing the nation’s more deep-seated social and health issues.”

Our patients in general, start from a deficit. They haven’t received health care consistently. They’ve maybe had bad experiences with health care, so they don’t trust the system,” Kiehl said. “Covid-19 simply highlights the gravity of that problem.”

In Chicago, 72% of the people who have died from Covid-19 are black, though they make up 30% of the population, officials said.

The Englewood neighborhood where St. Bernard services is plagued by systematic inequalities — like few places to buy fresh food — which help deepen the health disparities among minorities in the city because it increases obesity and diabetes; two preexisting conditions that the CDC warns increases the likelihood of serious Covid-19 illness.

“We are serving a patient population that is vulnerable, so we probably need to procure that equipment sooner than Rush because our clients have more comorbidities,” or preexisting conditions, she said.

A puzzle with missing pieces and a race against time

For the man in Truman Medical without a history, the nurses in the end never could confirm if he had any preexisting conditions like diabetes, heart disease or cancer. But Kiehl guessed something other than Covid-19 contributed to his death.

She said it’s not uncommon to see people with chronic conditions left untreated due to various barriers to receiving health care. That makes creating treatment plans harder to do.

Because of the intensity of Covid-19, those pieces need to come together quickly in order to give the patient the best chance, she added.

“We had another [Covid patient] that actually had no idea they had cancer because they hadn’t accessed health care. It precluded their immune system from being capable to fight the virus,” Kiehl said.

And according to Kiehl, that patient eventually succumbed to complications from their illness and the virus.