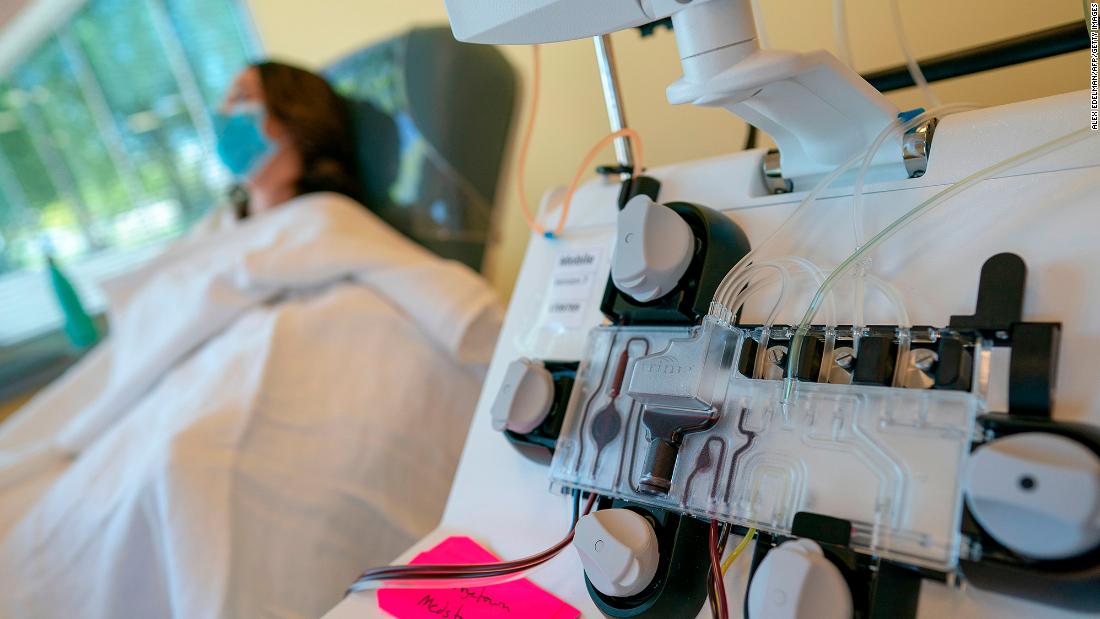 As many as 45 hospitals from coast to coast have expressed interest in collaborating on a randomized, controlled clinical trial sponsored by Vanderbilt University Medical Center, said principal investigator Dr. Todd Rice.

The response comes amid concerns that the Trump administration pressured the FDA into approving broader use of convalescent plasma, which already has been administered to more than 77,000 COVID patients in the U.S. President Donald Trump characterized the treatment as a “powerful therapy,” even as government scientists called for more evidence that COVID plasma is beneficial.

A National Institutes of Health panel this week countered the FDA’s decision, saying that the therapy “should not be considered the standard of care for the treatment of patients with COVID-19” and that well-designed trials are needed to determine whether the therapy is helpful. Data so far suggests the treatment could be beneficial, but it’s not definitive.

“It’s an important scientific question that we don’t have the answer to yet,” said Rice, an associate professor of medicine and director of VUMC’s medical intensive care unit.

Convalescent plasma uses an antibody-rich blood product taken from people who have recovered from a viral infection and injects it into people still suffering in the hopes that the therapy will jump-start their immune systems, boosting their ability to fight the virus. The approach has been used on an experimental basis for more than a century to fight other virulent diseases, including the 1918 flu, measles, Ebola, SARS and H1N1 influenza.

Last month, NIH officials awarded $34 million to Rice’s study, the Passive Immunity Trial of the Nation for COVID-19, dubbed PassItOnII, which has also received funding from country music superstar Dolly Parton. The trial, which aims to enroll 1,000 adult hospitalized patients, could meet its goals by the end of October. If it shows evidence of likely benefit to COVID patients, it could immediately change clinical practice, Rice said.

Half of the participants will receive convalescent plasma with high levels of disease-fighting antibodies from a stockpile of more than 150 units of the product already collected, Rice said. The other half will receive a placebo solution.

Though the trial launched in April, enrollment has been slow. The funding allows enlistment at more than 50 sites nationwide. That has spurred new conversations about joining the trial — and about not employing the controversial authorization issued by the FDA, said Dr. Claudia Cohn, director of the Blood Bank Laboratory at the University of Minnesota Medical School. She expected her institution to decide this week.

“I’d rather frame it as not rejecting the FDA, but simply taking the longer view,” said Cohn, who is also medical director for the AABB, an international nonprofit focused on transfusion medicine and cellular therapies.

At the Ohio State University Wexner Medical Center, officials have opted to join the trial and are considering making it “the first option” for COVID patients who qualify, said Dr. Sonal Pannu, an assistant professor and pulmonologist.

“Many of the academic leaders believe we should do the trial, and we would be severely limiting” the emergency use authorization, or EUA, she said, noting that first patients could be enrolled soon. The plasma still could be used under the EUA to treat patients such as prisoners, who are unable to consent to join a clinical trial, she added.

That’s the same stance adopted by the University of Washington, said Dr. Nicholas Johnson, an assistant professor of emergency medicine who’s leading the trial at the Seattle site. “We’re really interested in enrolling patients as the first option,” he said.

The questions are similar to those raised with hydroxychloroquine, another treatment Trump touted for treating COVID-19. FDA officials issued an EUA for the drug in April, only to revoke it in June after data indicated the drug might be harmful.

“On a couple of occasions, we’ve allowed clinical practice to get ahead of the science,” Johnson said. “We’ve learned that lesson a couple of times now.”

FDA officials did not respond to requests for comment.

Top federal health leaders, including NIH Director Dr. Francis Collins and Dr. Anthony Fauci, the nation’s leading infectious disease doctor, initially resisted the move to issue the EUA for convalescent plasma last month, telling The New York Times that the evidence for it was too weak.

Trump has criticized the FDA for moving too slowly to speed approval of treatments and vaccines for COVID-19. He announced the EUA on the eve of the Republican National Convention, calling it a “truly historic announcement.”

Issuing the EUA puts the fate of clinical trials into “extreme jeopardy,” said Arthur Caplan, a professor of bioethics at the New York University School of Medicine. With convalescent plasma in very short supply, it sets the stage for fights over access and makes sick patients less inclined to join a trial, where they might receive a placebo.

“If you have the EUA, it starts to damage the trials,” Caplan said.

Still, given that the FDA has authorized convalescent plasma for patients ill with COVID-19, hospitals that hesitate or refuse to provide it outside a trial are sure to face questions from families.

“If you commit to the randomized controlled trial only, you’re committing to a long-term dedication to science,” she said. “The question is, is it ethically inappropriate not to provide a therapy that has been shown to be possibly beneficial?”

Johnson, at the University of Washington, said most patients have been willing — even eager — to participate in clinical trials once they understand the need for rigorous scientific results.

And Caplan, the bioethicist, applauded the decision of hospitals to minimize the EUA and focus on the trial, calling it “a pretty feisty action.”

“It’s sensible,” he said. “It’s likely to really generate an answer to the question of ‘Does COVID convalescent plasma do anything?'”