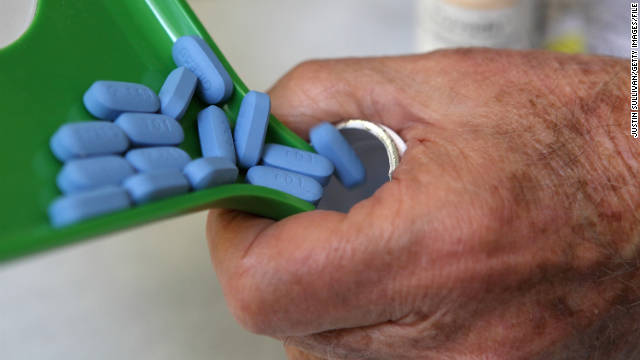 People infected with HIV go through three stages of infection:

HIV-1 and HIV-2 can both cause AIDS. HIV-1 is the most common human immunodeficiency virus; HIV-2 is found mostly in western Africa.

from UNAIDS:
37.9 million – Number of people living with HIV/AIDS worldwide in 2018.

8.1 million – Approximate number of people living with HIV globally that are unaware of their HIV-positive status in 2018.

1981 – The Centers for Disease Control and Prevention (CDC) publish the first reports of men in Los Angeles, New York and San Francisco who were previously healthy and are suffering from rare forms of cancer and pneumonia, accompanied by “opportunistic infections.”
1982 – The CDC refer to the disease as AIDS for the first time.

1983 – French and American researchers determine that AIDS is caused by HIV.

1999 – Researchers in the United States find evidence that HIV-1 most likely originated in a population of chimpanzees in West Africa. The virus appears to have been transmitted to people who hunted, butchered and consumed the chimpanzees for food.

January 29, 2003 – In his State of the Union speech, US President George W. Bush promises to dramatically increase funding to fight HIV/AIDS in Africa.
May 27, 2003 – Bush signs H.R. 1298, the US Leadership Against HIV/AIDS, Tuberculosis and Malaria Act of 2003, also known as PEPFAR (US President’s Emergency Plan for AIDS Relief), that provides $15 billion over the next five years to fight HIV/AIDS, tuberculosis and malaria abroad, particularly in Africa.
July 30, 2008 – H.R. 5501, The Tom Lantos and Henry J. Hyde United States Global Leadership Against HIV/AIDS, Tuberculosis, and Malaria Reauthorization Act of 2008, becomes law and authorizes up to $48 billion to combat global HIV/AIDS, tuberculosis and malaria. Through 2013, PEPFAR plans to work in partnership with host nations to support treatment for at least four million people, prevention of 12 million new infections and care for 12 million people.

October 2011 – In his book, “The Origins of AIDS,” Dr. Jacques Pepin traces the emergence and subsequent development of HIV/AIDS to suggest that initial AIDS outbreaks began earlier than previously believed.

July 24, 2012 – Doctors announce during the 19th International AIDS Conference that Timothy Ray Brown, known as the “Berlin patient,” has been clinically “cured” of HIV. Brown, diagnosed with leukemia, underwent a bone marrow transplant in 2007 using marrow from a donor with an HIV-resistant mutation. He no longer has detectable HIV.
March 3, 2013 – Researchers announce that a baby born infected with HIV has been “functionally cured.” The child, born in Mississippi, was given high doses of antiretroviral drugs within 30 hours of being born. A year later, the child now has detectable levels of the virus in her blood, 27 months after being taken off antiretroviral drugs, according to scientists involved with her case.
June 18, 2013 – Marking the 10th anniversary of PEPFAR, Secretary of State John Kerry announces that the millionth child has been born HIV-free due to prevention of mother-to-child transmission programs (PMTCT).
March 14, 2014 – The CDC reports on a case of likely female-to-female HIV transmission. Unlike previous announcements of other cases involving female-to-female transmission, this case excludes additional risk factors for HIV transmission.
July 24, 2017 – A 9-year-old child from South Africa is reported to have been in remission for over eight years without treatment, according to Dr. Avy Violari, who spoke at the 9th International AIDS Society Conference on HIV Science in Paris.
November 2018 – According to PEPFAR’s website, they have “supported life-saving antiretroviral treatment (ART) for more than 14.6 million men, women and children” since 2003.
March 5, 2019 – According to a case study published in the journal Nature, a second person has sustained remission from HIV-1. The “London patient” was treated with stem cell transplants from donors with an HIV-resistant mutation. The London patient has been in remission for 18 months since he stopped taking antiretroviral drugs. The study also includes a possible third remission after stem cell transplantation, this person is referred to as the “Düsseldorf patient.”
May 2, 2019 – A study of nearly 1,000 gay male couples, where one partner with HIV took antiretroviral therapy (ART), found no new cases of transmission to the HIV-negative partner during sex without a condom. The landmark, eight-year study, published in the Lancet medical journal shows that the risk of passing on the HIV virus is eliminated with effective drugs treatment.
October 7, 2019 – Governor Gavin Newsom signs a bill making HIV prevention drugs available without a prescription in California starting on January 1, 2020. The medications covered by the new legislation are pre-exposure prophylaxis (PrEP) and post-exposure prophylaxis (PEP), which both help prevent HIV infections. California becomes the first state in the country to allow pharmacists to provide the drugs without a physician’s prescription.
November 6, 2019 – According to a study published in the Journal of Acquired Immune Deficiency Syndromes, a team of scientists has detected a new strain of HIV. The strain is a part of the Group M version of HIV-1, the same family of virus subtypes to blame for the global HIV pandemic, according to Abbott Laboratories, which conducted the research along with the University of Missouri, Kansas City.
June 15, 2020 – A study is published in the journal JAMA Network Open showing that the life expectancy of people with HIV approaches that of people without the virus, when antiviral therapy is started early in infection. However, disparities still remain in the number of chronic health problems that people with HIV endure.