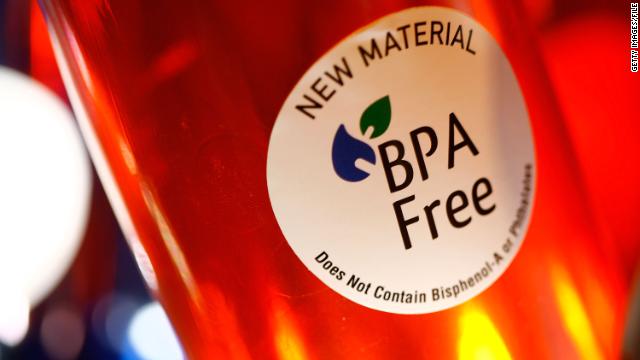 Or are you a receipt hoarder — who keeps all your paper sales receipts for taxes or refunds?

Neither of those habits are probably a great idea, experts say, if you want to avoid toxic chemicals linked to a variety of health disorders in children and adults.

Metal food and beverage cans are lined with an epoxy resin coating made from a family of chemicals called bisphenols.

That group includes the infamous bisphenol A that was used to create baby bottles, sippy cups and infant formula containers until frightened parents boycotted those products a decade ago.

The chemical compound BPA is an endocrine disruptor, affecting the hormones in the body, and fetuses and babies are especially vulnerable. It’s been linked to fetal abnormalities, low birth weight, and brain and behavior disorders in infants and children, as well as diabetes, heart disease, cancer and obesity in adults. One study even found erectile dysfunction in workers exposed to BPA.
Death from any cause may now be added to that list, according to new research published Monday in the journal JAMA Network Open.

The new study found people who had higher levels of bisphenol A in their urine were about 49% more likely to die during a 10-year period.

“This is another puzzle piece that compellingly speaks to the seriousness of the threat posed by these chemicals used in can linings and thermal papers,” said study author Dr. Leonardo Trasande, director of environmental pediatrics at NYU Langone Health.

Although this is the first study to find that result, “this is not necessarily a huge stretch from the perspective of what you might expect to happen because those three conditions — obesity, diabetes, and heart disease — all step up the risk of mortality,” Trasande said.

It’s in your receipts

An industrial chemical that has been around since the 1960s, BPA is used to make polycarbonate plastics — such as water bottles — as well as resins used to coat and seal many products.

BPA and its sister chemicals can be found in beverage containers, the lining of canned foods, dental sealants, compact disks, plastic dinnerware, car parts, impact-resistant safety equipment and many toys, according to the US Centers for Disease Control and Prevention.

Today, the most common method of exposure for people is through food contaminated by the linings of aluminum cans and beverages. The next highest level of exposure is via thermal paper used to create receipts at nearly every store, Trasande said.

“Definitely saying no to that thermal paper receipt is a straightforward way to avoid exposure.” he said.

It’s especially important to understand the risk of exposure during the pandemic, he added, because studies have shown that using hand sanitizer is a key gateway for the chemicals to absorb into the body.

“A study found that if you handle these thermal paper receipts and use hand sanitizer, you absorb almost tenfold more bisphenols into your body,” Trasande said.

Unfortunately, he added, cashiers in stores who use a lot of hand sanitizer are having “a very tough time in the context of the pandemic.”

They’re generally wearing gloves these days, so that reduces their exposure, all things considered,” Trasande noted. “But in an ideal world, we would go all electronic or shift back to old school papers.”

The US Food and Drug Administration believes that, based on current research, the levels of BPA in foods are “generally recognized as safe” or what is known in regulatory jargon as “GRAS.”

The FDA says the National Toxicology Program continues to stay on top of research into potential harms.

In 2010, the group found “some concern’ about the impact on fetuses, infants and children’s brain and behavior, as well as on the prostate gland; “minimal concern” when it comes to mammary glands or early puberty; and “negligible concern” about fetal abnormalities, low birth weight or future reproductive problems.
However, a recent review found evidence has doubled in the last five years about the negative impact on our health of endocrine-disrupting chemicals in plastics, pesticides, flame retardants and other merchandise.
While BPA was only one of those categories, it’s the most studied synthetic chemical, and it’s widely found in human tissue. One study found drinking water from polycarbonate bottles increased BPA levels by two-thirds in just one week. A report by the CDC found levels of BPA in the urine of nearly every American adult.
The American Chemistry Council, which represents US chemical, plastics and chlorine industries, said the term “endocrine disruptor” was “widely misused,” and provided the following statement when CNN published the review of evidence:

“To stay below ranges of exposure determined to be safe, consumers should read product labels closely and follow directions carefully. Some exposures will produce no response at all, while others may bring about temporary responses to which the body can naturally adjust and maintain its normal function. The primary focus should be on preventing over-exposures so that any potential health risks can be avoided.”

Rise of the bisphenol family

While BPA-free may be seen today on many plastic bottles and containers, environmental and health safety experts say the chemicals that have replaced them may be just as bad.

That’s because they are still in the same “bisphenol family,” and appear to have the same chemical reaction on the body.

Unfortunately for consumers, Trasande added, science must repeat studies on each of those 40 replacements to establish their health effects, even though the body is likely to respond in a similar manner to each.

“There’s always a lag, but in the meantime, people continue to be exposed,” Trasante said. “And you have to ask yourself how much more do we have to do this before we start regulating chemicals by class?”

“If you avoid canned food consumption, you avoid the major source of bisphenol exposure,” Trasande said.

“Now the alternative to canned fruits and vegetables is frozen or fresh fruits and vegetables, and I appreciate there are some accessibility issues during the pandemic, and the existence of food deserts for certain economically disadvantaged groups. That needs to be addressed,” he added.

Other ways to protect you and your family if you are concerned about exposure to BPA and its sisters include:

And be assured that a study found just a few days of eliminating BPA-like products from your lifestyle can lower the amount of BPA in your bloodstream.