Here’s what we know about Pfizer’s vaccine 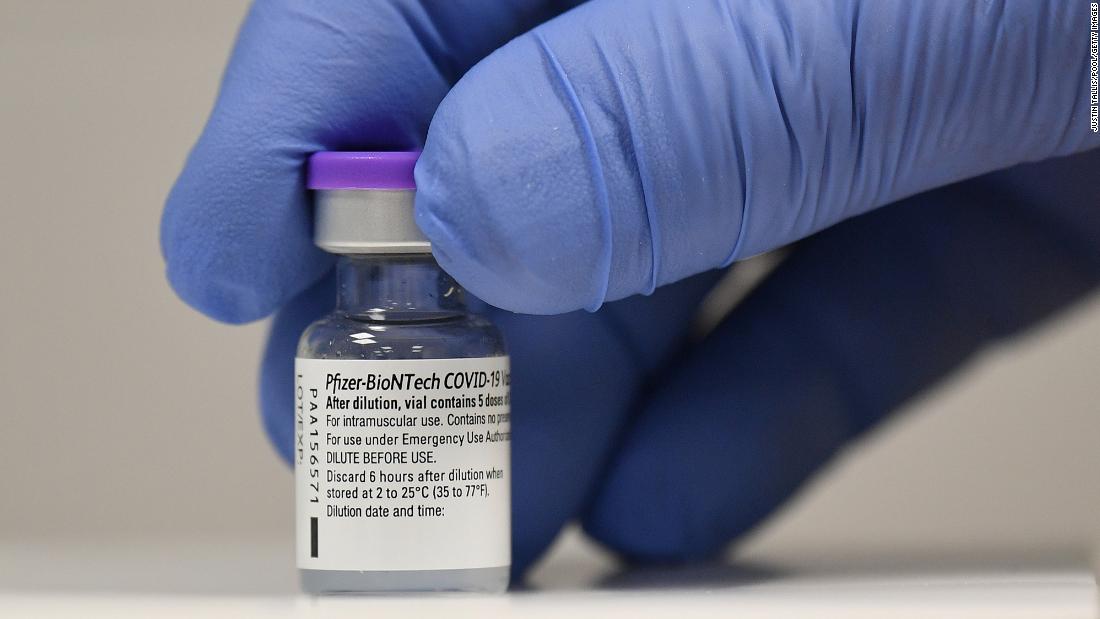 On Thursday, the US Food and Drug Administration’s vaccine advisers recommended the agency grant emergency use authorization to the Covid-19 vaccine developed by Pfizer and BioNTech.

While the EUA falls shorts of a full approval, the FDA’s authorization would be a first in the US and a remarkable achievement, coming about a year after the coronavirus emerged.

The FDA has yet to make a final decision about an EUA, but a source close to the White House coronavirus task force said it could come as early as late Friday.

In the meantime, here’s what we know about Pfizer’s Covid-19 vaccine.

Who will get it first?

Once the FDA decides to grant an EUA, the US Center for Disease Control and Prevention’s Advisory Committee for Immunization Practices (ACIP) will meet and vote on whether to recommend the vaccine. Once the CDC accepts the recommendation, vaccinations can begin.

That ACIP vote could come Saturday or Sunday.

This CDC advisory group had previously recommended that health care workers and residents of long-term care facilities should be the first to receive a vaccine when it receives EUA. The first shipments of the vaccine will be limited, so states will have to prioritize who should receive the vaccine first.
Both groups are “exceptionally high risk,” according to Dr. José Romero, chair of the ACIP, which voted earlier this month to recommend those groups be included in what it called Phase 1a of its distribution plan.

Keeping doctors and nurses healthy will be important for the continuing fight against the virus, which will stretch on for months, even after a vaccine is authorized. But Romero said that first group also includes other people working in health care institutions, like those who deliver food and perform housekeeping.

“Anybody that works within a health care institution that could have contact with an individual who has Covid should receive vaccination,” Romero previously told CNN.

Residents of long-term care facilities like nursing homes also need the protection. So far, they account for about 40% of coronavirus deaths in the US.

CVS, which is preparing to begin vaccinations in long-term care facilities, said that December 21 would be the earliest vaccine administration can start in the facilities.

“We’ll be in facilities that day in states that choose to begin as soon as possible,” spokesman Ethan Slavin said.

The FDA is set to make a decision on a separate vaccine candidate by Moderna in the coming days. If it’s also authorized, it’s possible that 20 million people could get vaccinated in the next several weeks, US Health and Human Services Secretary Alez Azar told CNN on Wednesday.

You asked, we’re answering: Your top questions about Covid-19 and vaccines

When will it be widely available?

The CDC is considering a four-phase plan to distribute vaccines. Phase 1a would be followed by Phases 1b and 1c, which could include essential workers at high risk of infection, other emergency personnel and people with underlying conditions who are at a higher risk of Covid-19 complications and death.

But it will likely be months before the vaccine is widely available to the rest of the population.

Dr. Anthony Fauci, the director of the National Institute of Allergy and Infectious Diseases, told CNN’s Chris Cuomo on Thursday night that the groups receiving the vaccine in December, January, February and March will likely include those in “high priority groups.”

“I would project by the time you get to April, it will be … ‘open season,’ in the sense of anyone, even the non-high priority groups could get vaccinated,” Fauci said.

In the meantime, it’s important that people continue to wear masks and social distance.

How many doses will be available?

At this time, the federal government has secured just 100 million doses of Pfizer’s vaccine, though it’s possible a deal could be made to secure more.

It’s important to note, however, that Pfizer’s vaccine requires two doses administered several weeks apart to reach 95% efficacy. So 100 million doses would vaccinate half the number of people.

Again, not all of those doses will be available at once. Azar said earlier this month that 6.4 million doses of Pfizer vaccine would be allocated for shipment the first week. The initial shipment would include half of the doses, followed by the second half three weeks later.

States will be getting shipments of the vaccine once a week to begin with, Operation Warp Speed chief adviser Moncef Slaoui said Friday, and governors will be told a week in advance how many doses they will be getting.

The number of doses will increase weekly because manufacturing will ramp up, Slaoui told CNN’s Jake Tapper.

Slaoui said he believes most doses will be injected within three to four days, but after that, “I think it will take a week.”

There are a number of vaccines in development by other companies as well. Azar told CNN the US has the ability to purchase up to 3 billion doses of vaccines from six manufacturers, including Pfizer, Moderna, AstraZeneca, Johnson & Johnson, Sanofi/GSK and Novavax.

How will the vaccine be shipped?

Shipping the vaccine will be a daunting task, and the wheels are already in motion.

The first shipments of the vaccine will be sent from a Pfizer facility in Kalamazoo, Michigan. UPS and FedEx have both said they’re standing by to help with distribution following authorization.

The vaccines will then be flown across the country, and the Federal Aviation Administration has said its air traffic controllers will prioritize flights carrying the vaccines.

FedEx and UPS will be involved in transporting the vaccines on the ground, delivering them to facilities where they will be administered, like hospitals and long-term care facilities.

But Pfizer’s vaccine needs to be stored at incredibly cold temperatures, making the logistics of delivery even more complicated.

The vaccine will be shipped in special containers packed with dry ice. Upon arrival at their destination, the vaccines will then be stored in ultra-cold freezers at minus 70 degrees Celsius, or 94 degrees Fahrenheit below zero.

What are the known side effects?

Pfizer’s clinical trials have shown no severe side effects.

According to a briefing document released by the FDA’s vaccine advisory committee, the most common side effects were reactions at the point of injection on the body, fatigue, headache, muscle pain, chills, joint pain and fever.

Severe adverse reactions occurred in less than 4.6% of trial participants and were less frequent in older adults compared to younger participants.

Health authorities in the UK, where the vaccine roll out began earlier this week, said Wednesday that people with “significant history of allergic reactions” should not receive the vaccine. The advice came after two health care workers “responded adversely” following their shots.

It also remains unclear how safe the vaccine is for other groups, like pregnant women and children under 16.