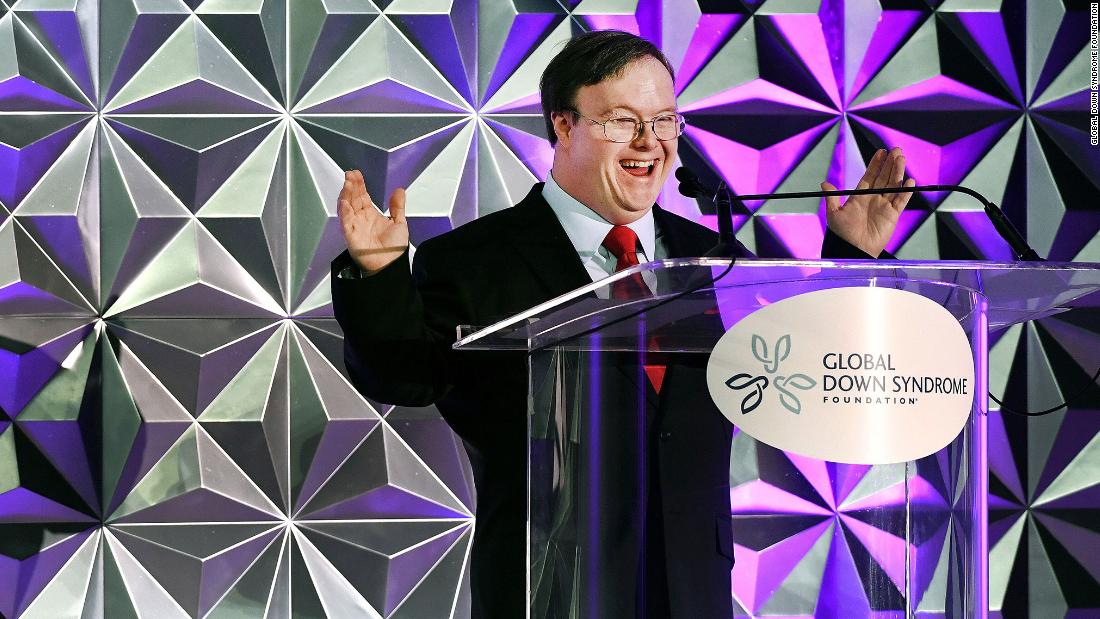 “I have spent my life trying to live big and make a difference,” Stephens said. “I believe my life is my message: A life with Down syndrome is a life worth living.”

The 38-year-old has spent much of the last six weeks quarantined with his parents, watching movies and focusing on “home fun,” he said. “My family and I are being very careful.”

Stephens hasn’t traveled more than two miles from his home in Fairfax, Virginia, since the beginning of the pandemic. He’s immune compromised and isn’t taking any chances.

He’s worried about recent news around triage guidelines for those with disabilities should health care resources become scarce.

“I have heard that some hospitals have plans that would put me at the back of the line,” he said.

Not all triage guidelines are created equal

In medical systems around the world overwhelmed by Covid-19, where overburdened hospitals have to choose who lives and who dies, disability advocates worry their lives won’t count.

Contemplating the actual value of a life during a pandemic may be abhorrent to some people, but hospitals with more patients than ventilators have to identify which patients get priority.

One system for patient prioritization was developed by Dr. Douglas White, a professor of critical care medicine at the University of Pittsburgh.

“It is critical to make clear that stereotypical judgments about quality of life have no role in these decisions, and no one is disqualified from treatment because of disabilities,” White told CNN in a story published April 3, 2020.
White’s framework, called “A Model Hospital Policy for Allocating Scarce Critical Care Resources,” operates under two large sets of criteria: save the most lives and save the most number of life years the patient is expected to have should they receive treatment and survive.
He said the Model Hospital guidelines had been adopted in hundreds of hospitals around the country, including Johns Hopkins and Medstar, who began using them after their 2009 publication in the Annals of Internal Medicine.

“These are inevitably tragic choices with only bad options,” White said. “But the only thing worse than developing a clear allocation framework is not developing one, because then decisions made during a crisis will be biased and arbitrary.”

When looking at the number of life years a patient may have left, White’s point system de-prioritizes patients with medical conditions associated with a life expectancy of less than one year, and then two to five years.

But in some cases, states use other criteria to determine whether patients might lose access to life-saving health care, including ventilators.

Advocacy groups have filed lawsuits against states they say have discriminatory guidelines.

During the first wave of coronavirus infections, Whitten acknowledged it’s been rare for the emergency triage guidelines to be used in real-life situations. But she said it was important to address any discriminatory procedures now, particularly if a predicted second wave of infections later this year decimates hospital resources again.

That’s why The Arc and the Center for Public Representation have filed complaints against a number of states to the US Department of Health and Human Services’ Office for Civil Rights.

So far the federal health agency’s civil rights office has reached resolutions with two states. Alabama removed old 2010 triage guidelines after the office ruled that the state guidelines discriminated based on disability and age. (The state had already published new guidelines in late February.)
Similarly, The Arc’s legal complaint resulted in Pennsylvania revising guidelines that had de-prioritized people for medical treatment on the basis of certain disabilities.

Whitten said she wasn’t surprised that bias was cropping up in these life-or-death situations.

Since time immemorial, disability rights has gotten “buried in times of relative prosperity,” she said. But during the pandemic, the contrast between the able-bodied and disability community is in stark relief.

Some in the disability community fear discrimination

“American culture worships youth, health, productivity and independence, leaving out so many people,” said Alice Wong, an activist and editor of the book “Disability Visibility: First-Person Stories From the Twenty-First Century.”

“All of these traits are grounded in biases and assumptions of what is ‘good’ and ‘valuable,’ leaving people who don’t fit as deviant, unworthy and ‘lazy,'” she continued.

Wong uses a wheelchair, receives breathing help from a ventilator and has two full-time family members who serve as her caregivers.

She said her needs don’t stop her from pursuing a vivid and fulfilled life of purpose, and she sees her own situation as an opportunity to advocate for others facing similar challenges.

Policies that devalue the worth of those with disabilities also devalue the diversity of lived human experiences that can constitute a life well lived, she said.

Thinking of those with disabilities as a drain on health care resources “objectifies disabled people as mere ‘consumers’ of precious goods and services rather than whole beings who are valued and loved by their communities,” Wong said.

She’s keeping tabs on some of the public debate and legal battles about how the US prioritizes health resources for able-bodied people over people living with disabilities.

“It’s scary how some guidelines make sweeping generalizations based on diagnosis,” she said. “Each person with cancer, dementia or a developmental disability has unique needs and must be evaluated on an individual basis when it comes to treatment for Covid-19.”

Questions of rights and dignity emerge now as triage in hospitals and discrimination suits in courts. But at its root, the value of life is a question founded in thousands of years of philosophical debate.

“We have to do the most good that we can with the resources we have,” said Chad Horne, an assistant professor of philosophy at Northwestern University.

In bioethics there are multiple broad ways of going about maximizing the good that health providers and society at large can achieve, he explained.

While hospitals may prioritize ventilators or other resources to “the ones who are likely to recover,” that doesn’t mean that “your life isn’t as worth living as someone without that impairment,” Horne said.

Another way of thinking about it, he said, would be through a “prioritarian” framework, he said. From that point of view, rather than saving the greatest number of ultimate life years, providers could seek to prioritize their resources to where there’s the greatest amount of need.

Based on those values assumptions, in a triage situation, ventilators would be prioritized for the elderly and the frail, rather than the young and the healthy.

Hospital guidelines are driven by a society’s deeper values

In the fog of war against coronavirus, philosophers say our North Star is the innate value of each human life.

“You always work with uncertainties. You work with the best data you have,” said Greg Bognar, senior lecturer in practical philosophy at Stockholm University, and coauthor of “The Ethics of Health Care Rationing: An Introduction.”

Though in crisis situations it’s hard to make perfect outcomes, there were ways in which hospitals could help as many people as they could.

“We should never have to make these kinds of decisions between patients,” he said. But he cautioned that it’s wrong to think of this potential health rationing scenario as “death panels saying that Grandma has to die.”

“I think in general we could defend the idea that prognosis matters,” Bognar said. “So those patients get the treatment who will live the longest.”

Outside of evaluating a patient’s prognosis, he argued that it wouldn’t be ethically permissible to extend the idea of prognosis any further than life or death.

For instance, the category comprised of individuals with disabilities might include those lacking eyesight or people using wheelchairs to get around. But in many cases, physical or intellectual differences don’t have any bearing on life expectancy, and can’t therefore be used to decide who would get a ventilator first in a hospital overrun with Covid-19 patients.

Beyond that, Bognar noted that bioethicists don’t consider it valid to make determinations that a life lived in poverty or in suffering is any less worth saving than one lived in less trying circumstances. A human life is a human life.

“You don’t want to make quality of life judgments about person X having a better life than person Y,” he said.

That’s been the message that Wong has been pushing for years through her work running the Disability Visibility Project, helping to amplify the voices of those with disabilities so that those human experiences aren’t erased — especially in periods of heightened risk — like our present moment.

“No one should feel ashamed for needing help or feeling vulnerable. Weakness is not a moral deficit,” Wong said. “Everyone is interdependent with one another, and we all have the power to support and care for each other.”