He was a Covid-19 patient. She cleaned his hospital room. Their unexpected bond saved his life 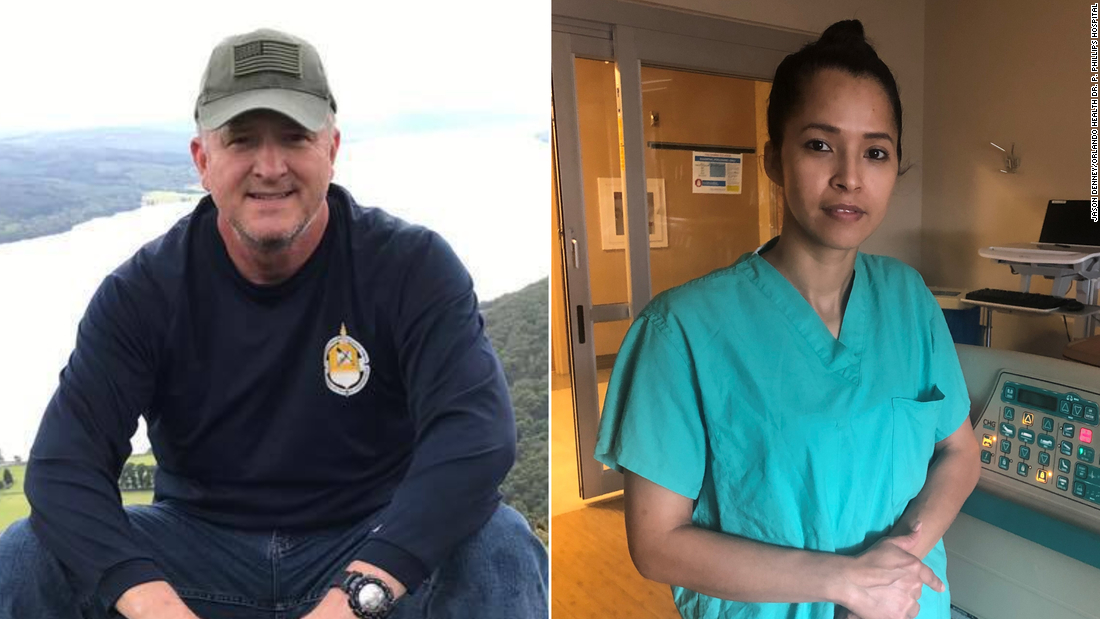 The man lay alone in his pressurized room at Dr. P. Phillips Hospital in Orlando. He had a severe case of Covid-19, and it looked like he was losing the battle.

A Catholic priest came to administer last rites. The patient, Jason Denney, said goodbye to his family via FaceTime.

But Quinteros, a hospital housekeeper, urged Denney not to lose hope.

She told him his life was in good hands, both the doctors’ and God’s. She said God was not done with Denney and encouraged him to keep fighting.

As the coronavirus pandemic has forced hospitals to impose strict restrictions on visitors and clergy, the work of people like Quinteros has become even more important, say health care experts.

They don’t just keep the rooms clean of harmful germs. Many also try to lighten the mood with smiles or jokes, provide encouragement when patients lose hope and offer an attentive ear when patients need to process their emotions.

And so it was that a housekeeper from Guatemala and a retired Air Force colonel met in a hospital room in Florida. And slowly, one began to heal the other.

“I don’t think she realized at the time what she was doing for me,” Denney told CNN in recent interview. “She was saving my life.”

The colonel and the housekeeper

Denney, 52, was born in England to an American father and Scottish mother. After 22 years in the Air Force and two deployments, he recently took a job with a defense contractor.

Quinteros was born in Pasaco, a small city in southern Guatamala, where her father was a farmer. The 33-year-old moved to the United States about 15 years ago, and is married with two children.

She was a hotel housekeeper for years before joining the hospital staff seven months ago.

When Covid-19 patients began to arrive at Dr. Phillips, Melinda Plumley, the chaplain manager, realized her staff would not be able to do their job as usual. Fears of contagion made it impossible to hold the face-to-face conversations that can help patients process difficult emotions.

So Plumley turned to the housekeepers and other staff members who visit patients’ rooms each day.

“We put together some material of easy, open-ended questions for staff to get the patient talking,” she said. “And now we have patients who say that if it weren’t for the woman who cleans my room, I’m not sure I would have made it.”

They talked about their children and their faith

At first, Quinteros and Denney just talked about the weather. Small talk to get his mind off the suffering.

Denney, who didn’t want to be sedated or intubated, said he was in unspeakable pain, focusing on surviving five minutes at a time.

“It was really nice to talk about something other than my illness,” he said. “I was sick and tired of hearing about what bad shape I was in.”

While he is quick to credit his doctors and nurses, Denney also began to look forward to Quinteros’ short visits every morning while she cleaned his room.

“She was not scared to be close to me,” he said.

After a few days they began talking about more serious subjects, like their children and their faith. Quinteros has two kids. Denney has three, including a 16-year-old son who also contracted coronavirus.

“I felt very guilty about my son coming down with Covid,” said Denney, who thought he might have passed along the illness to his child.

Quinteros, in an interview facilitated by a translator, said she noticed Denney’s fear and guilt right away.

“I felt bad for him,” she said, “and I wanted to make sure that he knew he was not alone.”

Though English is not her first language, Quinteros said she and Denney quickly formed a bond. For six days, she became a ray of light in his suffocating darkness.

“When a patient is treated with compassion and love,” she said, “language is not a barrier.”

They are sometimes called “invisible” workers, the custodians and housekeepers who clean and restock hospital rooms. But while we often don’t see them, they see us.

Doctors, nurses and chaplains have rightly been hailed as heroes for their brave efforts during the coronavirus pandemic. Plumley jokes that spiritual healers haven’t gotten this much press since the Reformation.

But the work of hospital housekeepers has been just as vital, said Dr. Neil Prose, a pediatric dermatologist and professor at Duke University’s Global Health Institute.

Most hospitals around the country have imposed strict limits on visits from family members and even chaplains, leaving patients to suffer through agonizing hours alone.

“For this reason,” said Prose, “the work of housekeepers in providing emotional support to patients and their families has become more important than ever.”

It can be scary being a hospital housekeeper, sometimes called an environmental services worker, during a pandemic.

In a recent op-ed, Annette Brown, an environmental services worker at a Baltimore hospital, said people like her are in an impossible position, caught between economic hardship and a deadly disease.

“Cleaners like me do the very hard and dangerous work of disinfecting and keeping every surface up to a critically safe standard,” she wrote. “We are desperately hanging on to our jobs while knowing it could get us and our family sick or even killed.”

Before she enters a Covid-19 patient’s room, Quinteros puts on a mask as well as a protective gown, gloves and eyewear.

Her Catholic faith, she said, provides another kind of protection.

“I rely on the training I received at the hospital and put my faith in God. I put everything in God’s hands.”

Denney, who is also Catholic, said Quinteros would talk about the power of Jesus and how the Lord would heal him.

These little moments can save lives, said Jane Dutton, a scholar at the University of Michigan who has studied the role of hospital housekeepers and other “invisible workers.”

“It only takes 40 seconds of a caring interaction to change a patient in a way that affects their whole health trajectory,” Dutton said.

And it’s the less-heralded hospital workers who most often provide these healing moments, Dutton said.

Though hospital housekeepers are often measured by standards of productivity — how many rooms they clean — hospital executives are beginning to realize their larger importance.

Prose, the Duke doctor, said custodians are often ignored by doctors and other high-level hospital staff. But after studying their role and making a short documentary about them, he realized how crucial they are.
“We quickly realized that they often interact with patients more than physicians do,” Prose has said, “and they do so with great compassion.”

Denney, for one, knows how important a hospital housekeeper can be.

A few days after he left Dr. Phillips, Denney asked the hospital for Quinteros’ number and sent her a text thanking her. He hopes to meet her family and take them out for dinner.

“I would love just to see her again and say thank you,” he said. “People don’t realize that in their brief engagements with other people, the words you say matter. And in the situation I was in, they really matter.”