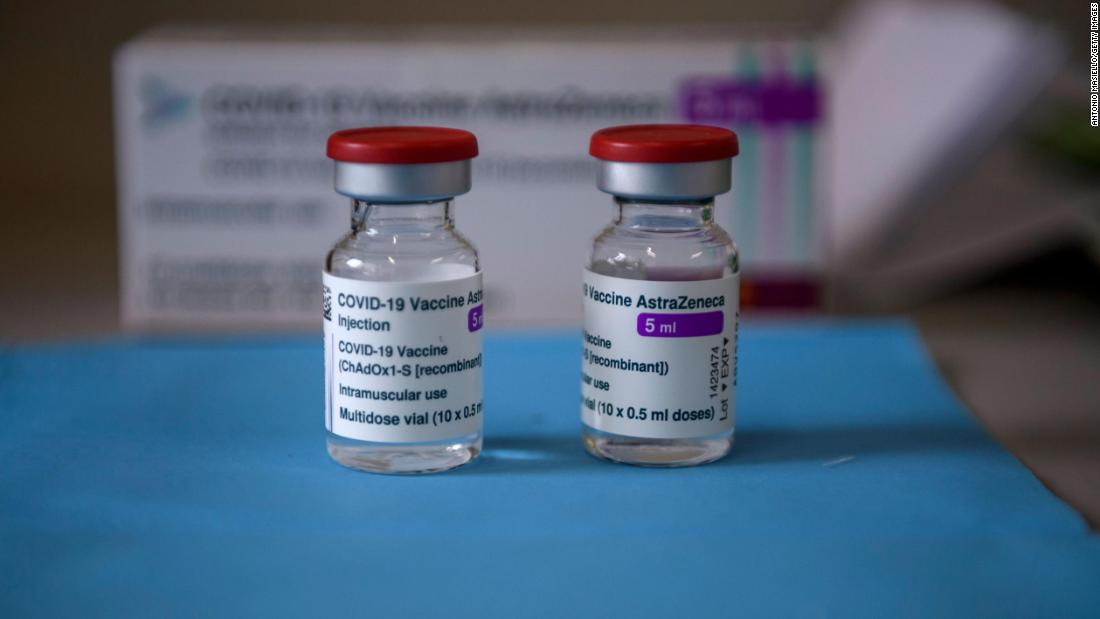 But questions arose about the accuracy of AstraZeneca’s data, and even more significantly, on Wednesday, European drug regulators said there was a possible link between the AstraZeneca vaccine and rare blood clots. Some countries — more than 70 have authorized the shot — have now limited its use.
Dr. Anthony Fauci told CNN Wednesday that even if the US Food and Drug Administration granted emergency use authorization to AstraZeneca’s vaccine, there’s no need for it right now in the United States.

“We already have contracted for enough vaccines, from Moderna and from Pfizer and from [Johnson &Johnson],” he said. “There is no plan to immediately start utilizing the AstraZeneca [vaccine] even if it gets approved through the EUA, which it very well might.”

Fauci said it wasn’t because of the AstraZeneca vaccine itself, but rather that it’s not necessary in the US right now.

“It’s not any indictment against the product. We just have a lot of vaccines,” he said.

But experts advising the government on vaccine policy say that doesn’t paint the whole picture.

The three advisers spoke to CNN on the condition of anonymity because of the sensitivities surrounding AstraZeneca’s possible application to the FDA.

One adviser told CNN that federal health officials have privately expressed concern that offering AstraZeneca could increase vaccine hesitancy in the US, which is already a problem among some groups.

“I think they’re crossing their fingers that AstraZeneca won’t apply for emergency use authorization,” the adviser said. “This vaccine has a checkered past. There’s baggage. Why go down that road if we don’t have to?”

Pfizer, Moderna, and Johnson & Johnson’s vaccines have excellent safety records, with tens of millions of shots without any reported serious side effects.

“Everyone would raise questions — ‘You’re not giving me that new blood clotting vaccine, are you?'” another adviser said, referring to AstraZeneca’s vaccine. “Why muddy the waters with a vaccine that comes with a somewhat checkered reputation?”

In an email, an AstraZeneca spokesperson declined to respond specifically to Fauci’s statements or the advisers’ concerns but pointed CNN to AstraZeneca’s Phase 3 results in its US trial, which showed that the vaccine was 76% effective at preventing symptomatic Covid-19 and 100% effective at preventing severe or critical disease and hospitalization.
AstraZeneca’s vaccine is particularly inexpensive and easier to store and transport than Pfizer and Moderna’s vaccines, which makes it especially useful in developing countries.

The spokesperson wrote that the company is committed “to ensuring fair and equitable vaccine access to communities across the world, regardless of geography or income level,” and is “very proud of the progress that has been made so far” by the company and its global partners.

Wednesday, AstraZeneca issued a statement responding to findings by the European Medicines Agency and the UK’s Medicines and Healthcare products Regulatory Agency.

“Today the UK’s Medicines and Healthcare products Regulatory Agency (MHRA) and European Medicines Agency (EMA) completed their assessment of extremely rare blood clotting events with low platelets from over 34 million people vaccinated with AstraZeneca’s COVID-19 vaccine in the UK and EU,” according to the statement. “[The agencies] came to the view that these events have a possible link to the vaccine and requested they be listed as an extremely rare potential side effect. Overall, both of these reviews reaffirmed the vaccine offers a high-level of protection against all severities of COVID-19 and that these benefits continue to far outweigh the risks.”

The statement also said that the World Health Organization found that “a causal relationship [between the vaccines and blood clotting events] is considered plausible but is not confirmed.”

CNN spoke with three government vaccine advisers who said they wouldn’t take the AstraZeneca shot if they had the option of taking the vaccines made by Pfizer, Moderna or Johnson & Johnson.

“All of them keep you out of the hospital and keep you from dying, but those three have a better safety profile,” one of the advisers said.

But they also said they would take AstraZeneca’s vaccine if it were the only one available to them.

One of the advisers remembered getting an email from an acquaintance in Germany asking if she should get the AstraZeneca vaccine, which was the only one available to her.

“I told her yes, absolutely,” the adviser said.

A ‘delicate’ spot for the FDA

The AstraZeneca spokesperson told CNN the company is “currently progressing submission to the FDA for Emergency Use Authorization.”

That could put the FDA in a tough spot.

A thumbs-down from the FDA — for whatever reason — would be problematic for two reasons.

First, the FDA is considered the gold standard around the world, and disapproval could cast doubt on a vaccine that is relied upon by dozens of countries and has already been given to nearly 200 million people.
Second, if the FDA doesn’t authorize AstraZeneca’s vaccine, it could make it awkward for the US to donate its shots — it has agreements to purchase 300 million doses — to countries with vaccine shortages.

“It will look as though we’re dumping our second-rate vaccine — ‘We don’t want to use it, but they can use it in Mali.’ That would look terrible,” one of the advisers said. “It’s a delicate situation for sure.”

An alternative would be to approve the AstraZeneca vaccine, explain that the US doesn’t need it, and then donate the US supply to countries with vaccine shortages.

But even so, other countries might still perceive it as dumping an inferior vaccine, the advisers said.

AstraZeneca’s spokesperson did not give a timeline for applying to the FDA. On March 22, Ruud Dobber, president of AstraZeneca’s biopharmaceuticals business unit, told CNBC that the company planned to apply for an EUA in the first half of April.

Some of the advisers told CNN they hope company executives change their minds.

“If I were AstraZeneca’s CEO, I might say, ‘what is the purpose of going to the FDA? If we get approved, our vaccine isn’t going to be used [in the US], and that will be demonstrated in the press, and our reputation will be besmirched,'” the adviser said.

If they don’t apply, the adviser said, the company could “save face and still promote its vaccine around the world.”