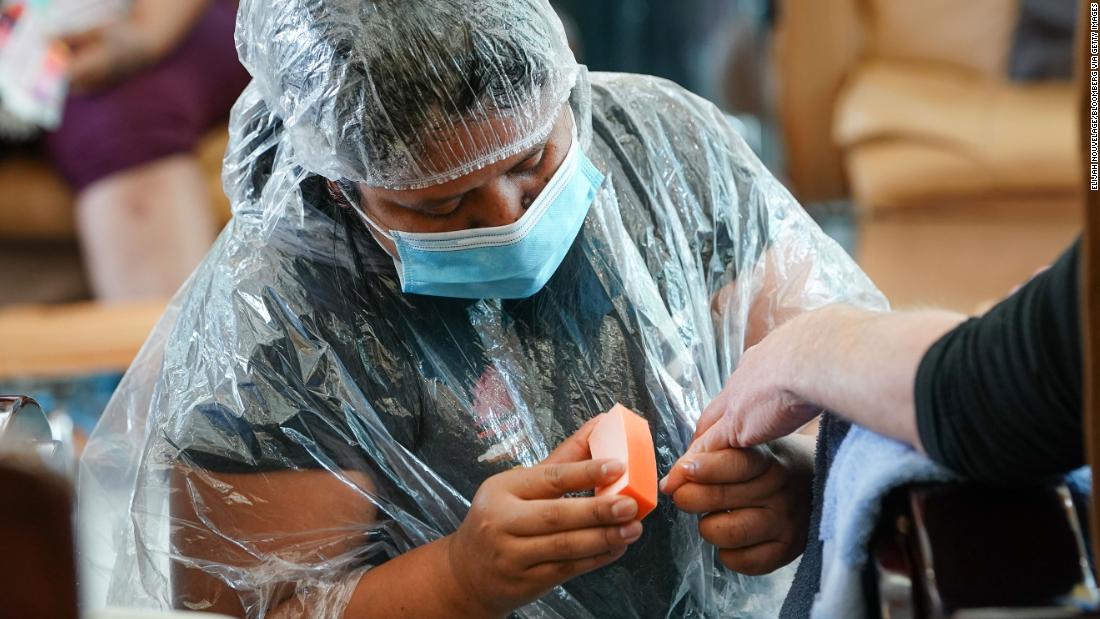 Gu said Tuesday that his model is based on an epidemiological methodology called SEIS, which stands for susceptible, exposed, infectious, susceptible modeling.

“We use a very classic epidemiologic model,” Gu said, adding that his model is updated daily and he is concerned other models are under-projecting deaths.

When it comes to deaths, the coronavirus crisis “might be more serious than what people have been thinking,” Gu said. “I want to make sure that people understand the facts and the science.”

Nationally, as of Tuesday morning, the model predicts that there will be a total of 153,373 mean deaths in the United States, with a predicted range of 87,409 deaths to 302,324 deaths.

Out of the 12 states in the Southeast United States, the model’s projections for Georgia are the only that assume statewide social distancing will be relaxed starting on May 1, to reflect Gov. Brian Kemp’s orders to reopen the state. The projections for the state of Georgia show the highest uptick in deaths per day will be between May and August for the region.

On Friday, Kemp allowed for the reopening of hair and nail salons, barber shops, massage businesses and gyms under new safety standards. He allowed restaurants and theaters to reopen with new restrictions Monday.

With the assumption of relaxed social distancing, the model predicts that the number of Covid-19 deaths per day in Georgia will jump from 32 people dying on May 1 to a projected 63 people dying per day by August 4.

Currently, 995 people have died from Covid-19 in Georgia, according to the model, and it projects that number could climb to 4,691 by August 4. The projection for total deaths in the state provides a range of estimates between 1,686 deaths on the lower end to up to 15,620 deaths on the higher end.

According to the model, the top five states out of the 12 in the Southeast with the highest projected total deaths by August 4 are: Louisiana, Georgia, Florida, Virginia and North Carolina.

While the model’s assumption for Georgia is that social distancing measures would loosen by May, the model assumes that for every other state reopening will begin in June.

“But we’re looking at moving that up because obviously many states now are considering reopening — but still the issue is that ultimately no one knows what’s going to happen,” Gu said.

Overall, the model’s projections are estimates and predictions that come with caveats, Gu said. For each state, the projections provide a wide range of how many deaths could happen — depending on whether people continue social distancing and other possible factors.

“There is that huge uncertainty that what will happen is very prone to be affected by policy decisions. If Georgia, for example, orders everyone to wear masks, that may significantly reduce infections, according to some recent studies,” Gu said.

He added that the model’s projections show a spike for Georgia around June and July, which appears as if it could be a direct result of lifting lockdown measures.

“Our projections with regards to state reopenings are what we think will happen, but there’s no data for us to work off of right now so we’ll have to wait a few weeks to see,” he said. “Small things — small policy changes — can make a huge impact.”

Gu said he plans to continue updating his model and tracking Covid-19 cases and deaths nationwide.

Not all Southeast states to see increases

While most states are projected to see an uptick in daily deaths as social distancing measures are relaxed this summer, the large increase in Covid-19 deaths per day for Georgia was not found in the predictions made for some other states in the Southeast region — at least through the modeled period, which is until early August.

• Alabama: Deaths per day will fall slightly from eight on May 1 to six by August 4, with total deaths reaching 844 by August 4.

• Arkansas: Deaths per day will remain somewhat steady, from two on May 1 to one by August 4, with total deaths reaching 183 by August 4.

• Kentucky: Deaths per day will increase from eight on May 1 to 11 by August 4, with total deaths reaching 925 by August 4.

• Louisiana: Deaths per day will drop from 52 on May 1 to 29 by August 4, with total deaths reaching 5,102 by August 4. New Orleans has been viewed as a hot spot in the coronavirus crisis.

• Mississippi: Deaths per day will remain somewhat steady, shifting from eight on May 1 to nine by August 4, with total deaths reaching 890 by August 4.

• South Carolina: Deaths per day will remain somewhat steady, shifting from six on May 1 to seven by August 4, with total deaths reaching 669 by August 4.

• Tennessee: Deaths per day will decline from five on May 1 to one by August 4, with total deaths reaching 444 by August 4.

• West Virginia: Deaths per day will remain somewhat steady, shifting from two on May 1 to three by August 4, with total deaths reaching 240 by August 4.

All of the projections were made as of Tuesday morning and are subject to change.