FDA holds emergency authorization of plasma for Covid-19, according to the New York Times 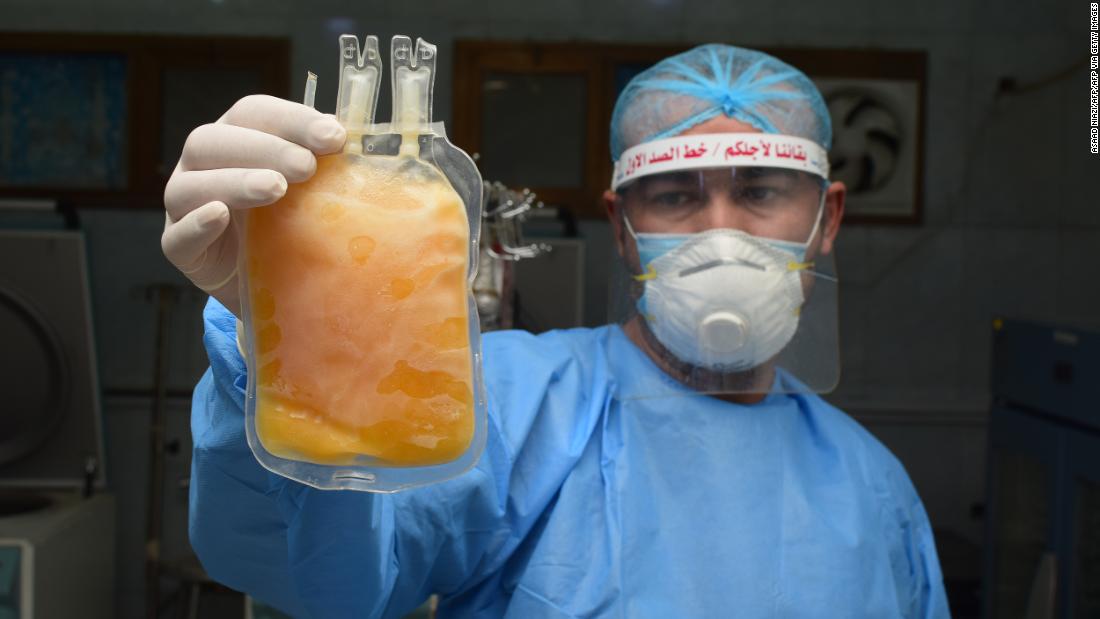 The hold came after a group of federal health officials — including National Institutes of Health Director Dr. Francis Collins, NIAID Director Dr. Anthony Fauci and Lane — stepped in to argue the emerging data on the treatment was too weak, the Times reported Wednesday, citing two senior administration sources.

“The three of us are pretty aligned on the importance of robust data through randomized control trials, and that a pandemic does not change that,” Lane told the Times.

CNN reached out to the FDA and was told “per policy, we are not able to comment on whether or not we will take any action regarding emergency use authorization for convalescent plasma.”

The treatment is created from the blood of people who have recovered from Covid-19, and it has shown success in two other deadly coronaviruses, MERS and SARS. It has also been used to treat the flu.

Emergency use authorization from the FDA does not require the same level of evidence as full FDA approval. The agency previously gave an EUA to hydroxychloroquine and chloroquine for Covid-19 treatment, then rescinded it in June after the antimalarials were found to be ineffective against coronavirus.

At the end of March, the FDA created a pathway for scientists to try convalescent plasma with patients and study its impact. Physicians have been using the treatment since. USCovidPlasma.org reports nearly 67,000 people have been infused with the treatment and nearly 14,000 physicians are using it as part of a Mayo Clinic-run program, but it’s still not clear if it works. Several studies are underway.

President Donald Trump and US health leaders, including Fauci and other White House Coronavirus Task Force Members, and even celebrities like Dwayne “The Rock” Johnson, have encouraged people who survived Covid-19 to donate plasma. Two weeks ago, on a tour of the Red Cross, Trump implored people to donate plasma, saying, “We have a lot of people that would heal, would get better. As soon as you can, please.”

The US government has put money into the experimental treatment. It awarded Plasma Technologies LLC a defense contract worth $750,000 to develop scaled-up Covid-19 plasma technologies, according to an announcement on the Department of Defense website Monday. It’s also stockpiling 200,000 units of convalescent plasma and the DoD said it wants to collect more by September.

Early results from some small studies have looked promising.

A very small study published in JAMA in March showed four of five patients given convalescent plasma improved. A second very small study of 10 Chinese patients published in May in the Proceedings of the National Academy of Sciences saw improvement in patients treated with convalescent plasma, with no safety issues. Another May study of 25 patients in Houston showed patients got better with no safety problems. In July, a larger study of 5,000 hospitalized patients showed the treatment was safe.
Not all trials have come to the same conclusions. One small study from Chinese researchers published in June did not show an improvement in the mortality rate among six critically ill patients, but the researchers did not dismiss convalescent plasma completely. Instead, they suggested it may work if patients were treated earlier.
Another randomized trial of 103 patients in China found no statistically significant improvement in patients, but it’s hard to draw conclusions from that trial because it had to be stopped early when the flood of patients slowed to a trickle and there weren’t enough to test the therapy. Some other studies in the US have also had trouble recruiting enough patients.
There is one larger study released in August involving 35,000 patients that has not yet been peer reviewed. It found that giving people the plasma treatment early seemed to reduce deaths more. People who got the transfusions within three days of diagnosis had a seven-day death rate of 8.7%, while patients treated four or more days into the course of illness had a 11.9% mortality rate.

But there was no placebo group in the study. Without that comparison, it’s still hard to know if the treatment made the difference.

“Convalescent plasma has not yet been proven to work with the trials that we want to see, these randomized control trials,” Dr. Ian Lipkin, the director of the Center for Infection and Immunity at Columbia University Mailman School of Public Health, said in an interview on Monday. “Although there is a lot of reason for optimism there, too, it’s not been shown and until that’s done, there’s always going to be a healthy skepticism in the community, despite all the background information that suggests it’s likely to work.”