Fauci says he will practice what he preaches this holiday season 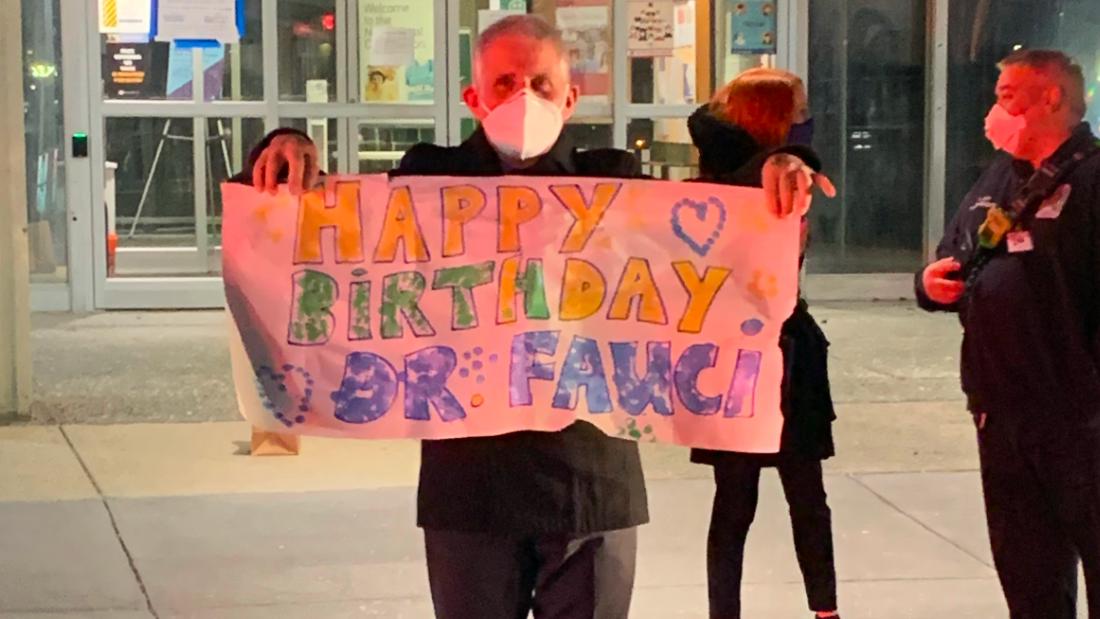 “I’m afraid if you sort of start dropping back and philosophizing about things, you could take your attention away from the job that we have,” he told CNN. “So, I will leave the philosophizing to another day.”

Fauci’s job right now is formidable. Nearly 120,000 Americans woke up Thursday in the hospital with Covid-19, a record for the pandemic. On Wednesday, more than 3,000 people died from the virus.

Fauci, director of the National Institute of Allergy and Infectious Diseases, has a very clear message to the country: “Curtail travel to the extent possible [and] don’t congregate in large dinners and celebrations.”

He’ll be heeding his own advice on his birthday and Christmas.

“I really feel strongly that I need to practice what I preach to the country,” he said. “Although I would love very much to have my children, who live in different parts of the country, [to] come in together and have a celebration for my birthday and Christmas, I don’t think that’s the prudent thing to do, so I’ll be having a quiet dinner with my wife, and we’ll Zoom in the children.”

He knows that what he’s asking people to do isn’t easy. He knows it’s hard to stay away from the people you love, especially during the holidays, or milestone events like big birthdays.

“I definitely feel sad,” he said. “I have three daughters, ranging in age from late 20s to early 30s, [and] this is the first holiday season of Christmas and my birthday that I have not spent with my daughters since they were born. So, [it] is sad, but we all have tried to take an upbeat attitude.”

He and his family hold tight to the idea that there will be a big reunion — just not now.

“Next year hopefully at this time, we’ll have a real in-person celebration with a lot of hugs that we can’t do right now,” he said. “We’ll look forward to better times.”

And when those better times arrive, he said, “we’ll make the most out of it.”

Anthony Stephen Fauci was born December 24, 1940, in Brooklyn. In 1966, he received his medical degree from Cornell University Medical College, and then went on to do his internship and residency at The New York Hospital-Cornell Medical Center.

In 1968, he started at the National Institutes of Health, where he learned “the ins and outs” of infectious diseases and immunology.

He says his work there on the HIV epidemic “both transformed my professional career and my life and defines me as a physician, a scientist and a public health person.”

Of the six — soon to be seven — presidents he has served, Fauci says the one that stands out for him is George W. Bush, who established the PEPFAR program that has supported antiretroviral treatment for nearly 17.2 million people worldwide with HIV.

For decades before Covid-19, Fauci said his worst nightmare was what has unfolded this year.

“A brand new virus that emerges, likely out of an animal reservoir, that’s respiratory born, that has the capability of spreading very, very, very efficiently among humans, and that has a high degree of morbidity and mortality,” he said. “That had been my worst nightmare, but you don’t anticipate or expect your worst nightmare to come true.”

Since that nightmare started to unfold in mid-January of 2020, Fauci said he hasn’t taken a day off.

“The days just melt into one another. You lose track of time. I think many people have experienced what I’ve experienced. It’s like one big blur,” he said. “Sometimes you wake up in the morning and for a very brief moment you’re wondering — ‘Is it July? Is it March? Or is it really December?’ — because you’re so preoccupied with what you’re doing.”

When asked how he deals with this intensity at age 80, he says his energy levels haven’t really changed since he was a young man.

“I’ve always been a very energetic person,” he said. “When I was in my 20s and 30s and 40s, I had boundless energy. It just seems that has not diminished very much.”

Does the near constant work ever wear on him?

“I would imagine it is – I don’t pay attention to its wearing on me. I think sometimes I’m quite exhausted, but you just keep going,” Fauci said. “You just kind of have to dig deep and suck it up because the problem itself is of such enormity that it just requires that you have to put a full effort into it.”

Fauci will keep going in the new year in the role of medical adviser to President-elect Joe Biden.

“I think that sooner or later I’m going to have to [retire]. I don’t see that right now clearly in my future,” he said.

He says the only thing he sees in front of him is “the challenge that we are currently facing” to get “out of this terrible pandemic that we’re totally immersed in.”