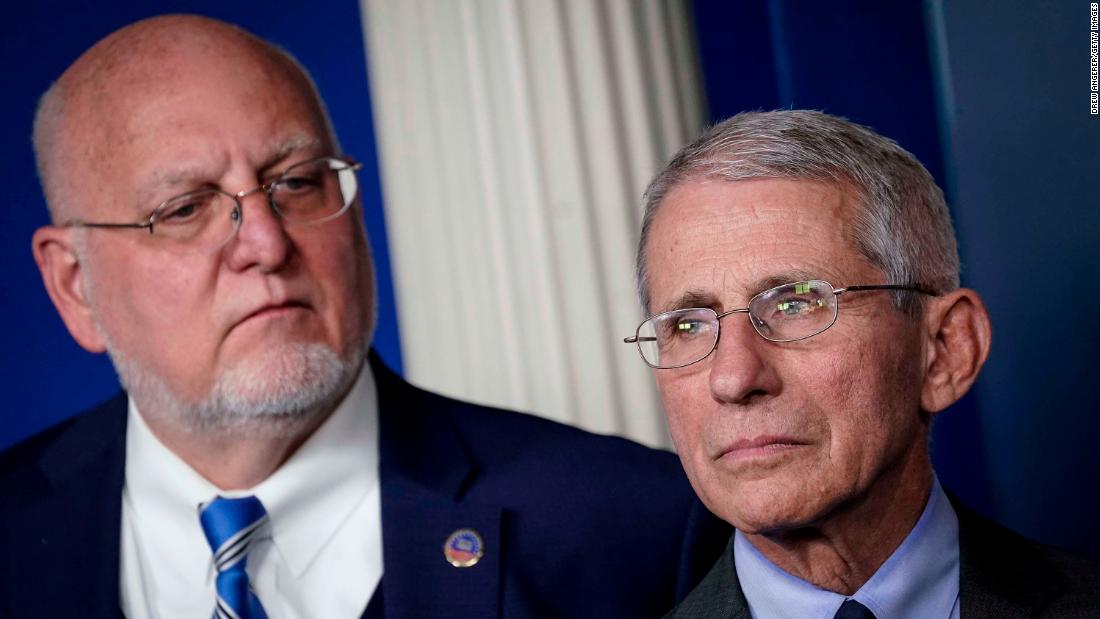 “To my knowledge, none of us have ever been told to slow down on testing. That just is a fact. In fact, we will be doing more testing,” Fauci said on a witness panel of top officials from the Centers for Disease Control and Prevention, the Food and Drug Administration and the Department of Health and Human Services.

After the President made the comment, multiple White House officials said that the President was joking. But Trump told a reporter on Monday, “I don’t kid, let me just tell you, let me make it clear,” when asked again if he was joking in his remarks over the weekend.

That wasn’t the only time that Fauci broke with the President during the hearing. Asked if he has concerns about the President’s decision to terminate the US relationship with the World Health Organization, Fauci responded, “Yes, I do,” adding, “Despite any policy issues that come from higher up in the White House, we at the operational level continue to interact with the WHO in a very meaningful way, literally on a day by day basis.”

Fauci gave a broad assessment of where the country stands amid the pandemic, warning that in some areas of the United States, “we’re now seeing a disturbing surge of infections.”

He said the next couple of weeks “are going to be critical in our ability to address those surges that we’re seeing in Florida, in Texas, in Arizona, and in other states. They’re not the only ones that are having a difficulty.”

The hearing comes as the country continues to grapple with the devastating public health consequences of the pandemic, which has already claimed the lives of over 120,000 in the US.

Asked to assess the likelihood of developing a vaccine, Fauci said “I feel cautiously optimistic that we will be successful in getting a vaccine,” adding, “I still think there is a reasonably good chance that by the very beginning of 2021 that, if we’re going to have a vaccine, that we will have it by then.”

Fauci said during the hearing that he does not regret the timing of when he told Americans to wear masks, explaining how the situation was different when concerns over shortages of personal protective equipment, or PPE, were more acute.

“I don’t regret that — because let me explain to you what happened. At that time, there was a paucity of equipment that our health care providers needed — who put themselves daily in harm’s way of taking care of people who are ill. We did not want to divert masks and PPE away from them, to be used by the people,” he said.

“Now that we have enough, we recommend … ” Fauci began answering before he was cut off for the next question.

Fauci told lawmakers during the hearing that American’s should avoid going into crowds, but if they must, they should wear a mask.

For those who do go against public health guidance of avoiding crowds, Fauci urged, “Please wear a mask. And as you wear a mask, and you’re in a situation where you’re getting animated in a demonstration or in a rally or wherever you are, avoid — as best as possible — the urge to pull your mask down and shout.”

CDC director says virus has ‘brought this nation to its knees’

Covid-19 has “brought this nation to its knees,” Redfield said Tuesday. “We’ve all done the best that we can do to tackle this virus,” he said during the hearing.

But Redfield said that the virus has highlighted decades of underinvesting in the “core capabilities of public health data.” Now is the time to fix the broken system, he added.

“This needs to be a partnership. It’s not all the burden of the federal government to invest in public health at the local level,” Redfield said. In reality, “if your funding of CDC was to go away tomorrow, public health infrastructure across this nation would just crash.”

“We’re right now the backbone of it,” he added.

Redfield also said on Tuesday that getting a flu shot this year will save lives.

“CDC has begun to prepare for months ahead, when the next season’s influenza illness will occur simultaneously, potentially, with Covid-19, increasing the challenges on hospitals, health care professionals and the public,” Redfield said.

“This fall, before the seasonal circulation of influenza increase, I encourage the American people to be prepared and to embrace flu vaccination with confidence for yourself, your families in the communities,” he said. “This single act will save lives.”

Hearing addresses impact of institutional racism during the pandemic

Fauci noted that some Black adults may not be able to social distance if they are essential workers, and there is a disproportionate prevalence of underlying conditions within the Black community, such as hypertension, diabetes, obesity, chronic lung disease and kidney disease.

“So unfortunately we have a situation where it’s sort of a double whammy,” Fauci said.

“Obviously, the African American community has suffered from racism for a very, very long period of time,” Fauci said. “I can’t imagine that that is not contributing to the conditions that they find themselves in, economically or otherwise.”

This story has been updated with additional developments Tuesday.