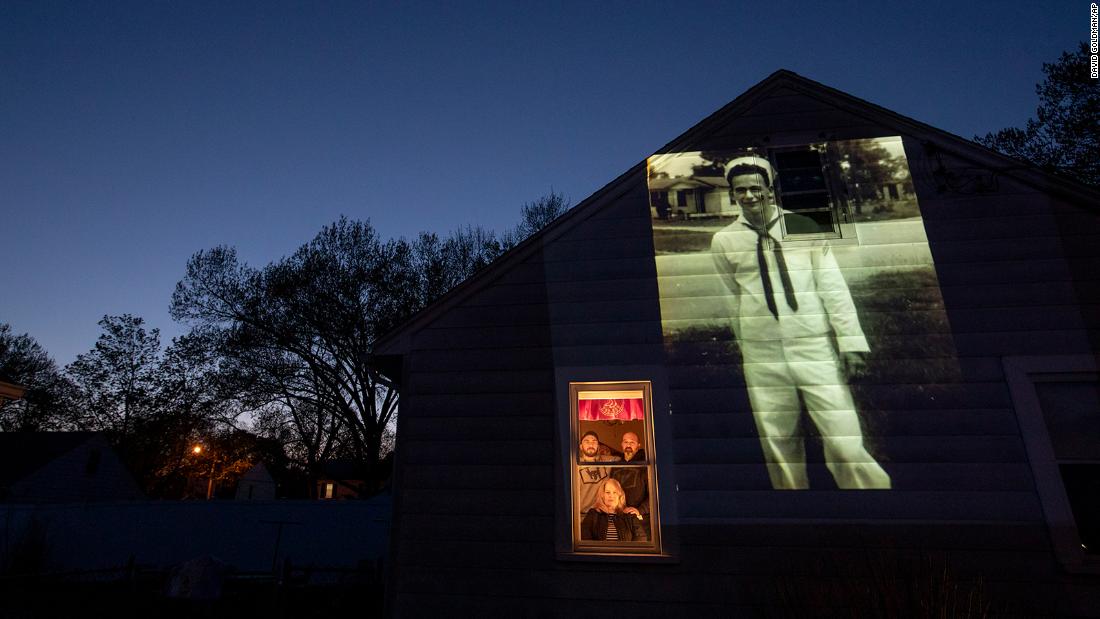 “He gave his life jacket to save a man,” his daughter Sheryl Blais said, recounting a favorite story of the man she so admired. Her father didn’t drown that day in the Pacific. But he would drown by Covid-19 many decades later on the morning of March 30, when the disease flooded his lungs with fluid.

Blais, who was 90, spent his final months of life at the Soldiers’ Home in Holyoke, 90 miles west of Boston. As the virus ravaged the facility, no fewer than 94 veterans lost their lives, at least 76 of those lost testing positive with Covid-19.

In one line of that report a social worker calls out a decision superiors gave to consolidate infected and healthy veterans together in a single ward. The worker noted that transferring the former soldiers downstairs was “like moving the concentration camp — we (were) moving these unknowing veterans off to die.”

Another harrowing interview in the investigator’s report described a health worker soothing one veteran while “across from him is a veteran moaning and actively dying.”

The worker explained that nearby “is another veteran who is alert and oriented, even though he is on a locked dementia unit. There is not a curtain to shield him from the man” in his last throes.

Holyoke isn’t the only American nursing home that saw these horrors during the height of the pandemic. In April, a tip led police to find 17 bodies in a nursing home in New Jersey. In another case, 60 bodies were found in trucks outside a New York funeral home. And a nursing home in Washington became the epicenter of that state’s outbreak.
By early June, a quarter of all US nursing homes were reporting at least one death, and federal data showed at least 26,000 nursing home residents had succumbed to the virus.

Each statistic comes attached to a story — often a breath-stopping, gut punch of a story — about someone’s father or mother dying alone, gasping for breath. That was the horrible reality for too many at the Soldiers’ Home in Holyoke.

The grieving families of the veterans hope that by telling the stories of their loved ones — men and women who bravely served their country — other nursing home tragedies like this can be averted.

‘Why in God’s name would they do this to these vets?’

At the Soldiers’ Home in Holyoke, Robert Blais was living in the 2-North section, and was one of the veterans who was required to join what would become a death ward on 1-North, with beds set up in the open with infected patients.

His daughter was one of the lucky few who got to see her father before he passed, despite the chaotic conditions.

“When I walked in and saw all of it, I was shocked,” she said. “They had people eating their lunch while others were dying next to them. Why in God’s name would they do this to these vets? They sent them literally into a death trap.”

The official Covid-19 death tally at Holyoke is 76, but Blais thinks that number is higher. Her father, for instance, was swabbed on March 27, and told the results would come back in five to seven days. He didn’t live to see them. So his death certificate doesn’t say Covid-19.

“I called up the doctor and asked to have the death certificate changed to Covid-19,” she said. After a lot of convincing, she got the actual cause of death added. But other families in the same position have tried that and failed.

Blais is left with her last happy memory of her father, a week before his death. Her family staged a birthday party for Robert, which he couldn’t attend as the facility was limiting visits during the pandemic.

“He was just standing in the window blowing us kisses,” she said.

The US Department of Veterans Affairs cited Holyoke as not being in compliance with Uniform Federal Accessibility Standards. A follow-up study from the state said that just 5% of the beds at the home were in compliance with VA standards, with the majority of the rooms exceeding the limit of two beds.

And in most cases, six residents would share a single bathroom, conditions that raised concerns for infection control. The study recommended revamping the building, but a 2012 proposal for a new building never got the funding needed to break ground.

Now the families are determined to rectify issues at the home that officials began raising a decade ago.

Honoring her father’s commitment to service, she’s enlisted in a fight of her own, working with families of other Soldiers’ Home victims to build a new 53,000-square-foot addition to the the facility. Such a project would add 120 private rooms, and would increase the home’s capacity to 270 long-term care residents.

“My dad knows that I will fight to the end for justice and to make the facility what it should have been seven years ago,” Blais said.

Laurie Mandeville Beaudette is one of the women with whom Blais shares her grief, and a sense of renewed purpose.

Her father, 83-year-old James Mandeville, had served in the US Navy for four years during the Korean War, spending a large chunk of that time deployed in Europe.

Late in life he lived at Holyoke, in a cramped room with three other vets, with beds only about 2 feet apart, she said. As the pandemic was rising, Mandeville had begun living in a private room, and when his daughter visited every day she would sanitize each area of his room with Lysol.

“You wouldn’t think the virus would get into a private room, but it did,” she said.

Mandeville was diagnosed with Covid-19 and sent to a nearby hospital, forming a sort of veterans wing with dozens of others transferred from Soldiers’ Home.

“On our last FaceTime he looked like he was in a coma with his eyes wide open,” his daughter said. “On Easter I was such a mess because I couldn’t get the image out of my head.”

She managed to slip into the hospital to see him before he died, wearing full-body personal protective equipment, including the jumpsuit. She let him know it was OK to go.

“He squeezed my hand. That was it,” Beaudette said. “Even if he could have opened his eyes, he wouldn’t have recognized me.”

Her father passed two days later, on April 14. A hospital worker called her to say he had held Mandeville’s hands and prayed for him as he drew his last breath.

In the last two and a half months, she too has transformed her pain into the families’ reform effort. On Thursday, Gov. Baker responded to his independent investigator’s report, with ideas including legislation to clarify oversight rules over the state’s veterans homes and adding staff.

“We really feel like we’re gaining momentum,” she said. “It’s helping a lot with grieving.”

The survivors at the home won’t be the same

Cheryl Turgeon didn’t lose her father, but he’s no longer the same man who had read the papers each morning at Holyoke and joked with nurses.

Her father, 89-year-old Dennis Thresher, served in the US Air Force during the Korean War, rising to the rank of staff sergeant while flying aboard bombers. His role, in which he and his crew braved enemy fire, would earn him a Peace Medal.

As the pandemic set in, she said she had to “call every day to make sure things were being taken care of.”

After developing symptoms, Thresher was transported out from Holyoke and admitted to the hospital on March 31. He spent six days on a Covid-19 floor. He lost 30 pounds.

He laid in isolation for weeks, becoming lonely and depressed, while conditions at his home worsened.

“I know (a nurse) who said they’re bagging two bodies a day,” Turgeon said. “This is 2020. That shouldn’t have happened.”

She normally visited her father three or four times each week. After three months she shared a socially distanced air hug with her father on Friday, June 19. But the meeting was bittersweet. Seeing how he’d regressed, she held back tears.

“I pray that he can return to baseline but he hasn’t walked since he got back,” she said. “He’s a strong man. I’m fighting for him and he’s fighting with me.”

One of the people leading the fight to comfort the families and revamp Holyoke is the facility’s former deputy superintendent, John Paradis.

He was the No. 2 person in charge there from 2013 to 2015, when he resigned in protest about the facility’s poor conditions. He wrote letters and spoke to elected officials to complain about issues there, including staffing, an inequity in funding between the state’s two veterans homes and the small room sizes.

Putting vets in such close quarters was an obvious infection risk, he felt.

The problems came to a head in December 2015. Paradis and his boss, former superintendent Paul Barabani, knew there was federal funding on the table to fund 65% of the proposed new building they hoped could safely house the veterans. But the state of Massachusetts didn’t provide the last 35% to get the project green-lit.

Now, just the sort of outbreak Paradis had feared has struck at Holyoke.

“All of these things, when you put them together, created this perfect storm for Covid-19,” he said.

This type of perfect storm is a warning of what outbreaks could do at other nursing homes or veterans home if we’re not all prepared for it.

“Ensuring that this tragedy will never happen again is the greatest legacy we can give our dads,” Beaudette said.