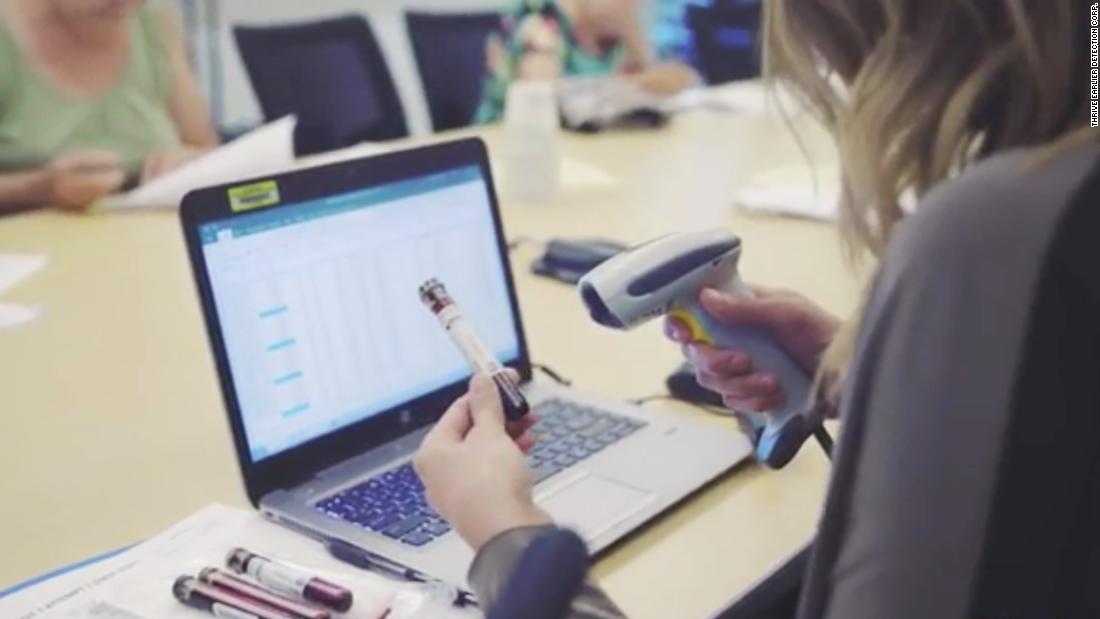 It’s a step forward in the race to develop an effective blood test — one that can tell people they may have cancer long before they have any symptoms. Currently, people can be screened for only a few cancer types.

The team at Johns Hopkins University, where the test was developed, say a commercial product is years away and they are working to fine tune their test — many cancers were not found by the blood test alone. But their results are the first to demonstrate that it’s possible to screen people for several types of cancer at once with a blood test.

They tested about 10,000 women with no symptoms. Those who had a positive test then were given combination PET and CT scans to look for tumors.

Out of the 10,000 women, the test turned up 26 cancers that were later confirmed with PET/CT, the team reported Tuesday in the journal Science.

They included cancer types that are not usually caught before they have already spread, because they cause such subtle symptoms in the early stages.

Their findings are the first to show the test, called a liquid biopsy, can detect cancer before people even suspected they might have it.

“They had no idea that they had cancer before the test was performed,” Dr. Bert Vogelstein, a Johns Hopkins researcher who helps lead the study team, told CNN.

The volunteers got treated for their cancers as part of the study.

“In several cases, surgery with intent to cure was performed. We don’t yet know that those patients were cured,” Vogelstein said.

Six of the volunteers had ovarian cancer, a difficult to treat cancer that is not usually detected until it has already spread and become deadly. Vogelstein described the case of one of them, whose ovarian cancer was still at stage 1, which means it had not spread at all.

“Her five-year survival is predicted to be 91%,” Vogelstein said. “If she had not been detected until there had already been metastases (spread), her predicted survival would have been 26%.”

The volunteer is cancer-free, 11 months later, he said.

Catching cancer in time to treat it

Nine other women were diagnosed with lung cancer, another type of cancer that doesn’t usually have any symptoms until it’s too late to cure it.

The test was far from perfect. Another 70 women in the trial were diagnosed with cancer that was not found by the blood test. As part of the trial, the volunteers also got standard cancer screening: mammograms and colonoscopies.

“Twenty-four additional cancers were detected by standard-of-care screening and 46 by neither approach,” the researchers wrote. The 46 other cancers became apparent through symptoms.

But just 1% of the women screened with the blood test got a false positive, meaning the test indicated they had cancer but the PET/CT scan found no evidence of it.

Mammograms can detect early breast cancer. Colonoscopies can detect early colorectal cancer and can also prevent cancer by removing precancerous growths. Pap smears, similarly, can detect cervical cancer or give doctors the opportunity to stop cancer before it fully develops. But a blood test could point doctors to several different types of cancer at once.

Johns Hopkins has developed the test with the help of venture capital funding and built a company called Thrive Earlier Detection to commercialize it. Last year, the developers showed the test, called CancerSEEK, could find cancer in the blood of people who had already been diagnosed.

Vogelstein cautions that the test is far from the market. “This is just a first step,” he said.

The team is now designing a larger trial to better demonstrate that the test can work without too many false positives, meaning it would not wrongly indicate someone had cancer when they did not.

Vogelstein said the team was careful to make sure their volunteers were not traumatized by the experience. “The information was communicated to patients and their physicians so that the results of the test could actually impact their care,” he said.

“One of our main concerns in the design was to try and build in as many safety valves of making sure patients were contacted, that they understood precisely what the tests could and could not do, that they were informed about the need to continue other cancer prevention measures and mammography and colonoscopy,” he added.

The researchers did not want to give the volunteers who got a negative blood test a false sense of security that would encourage them to stop cancer screenings.