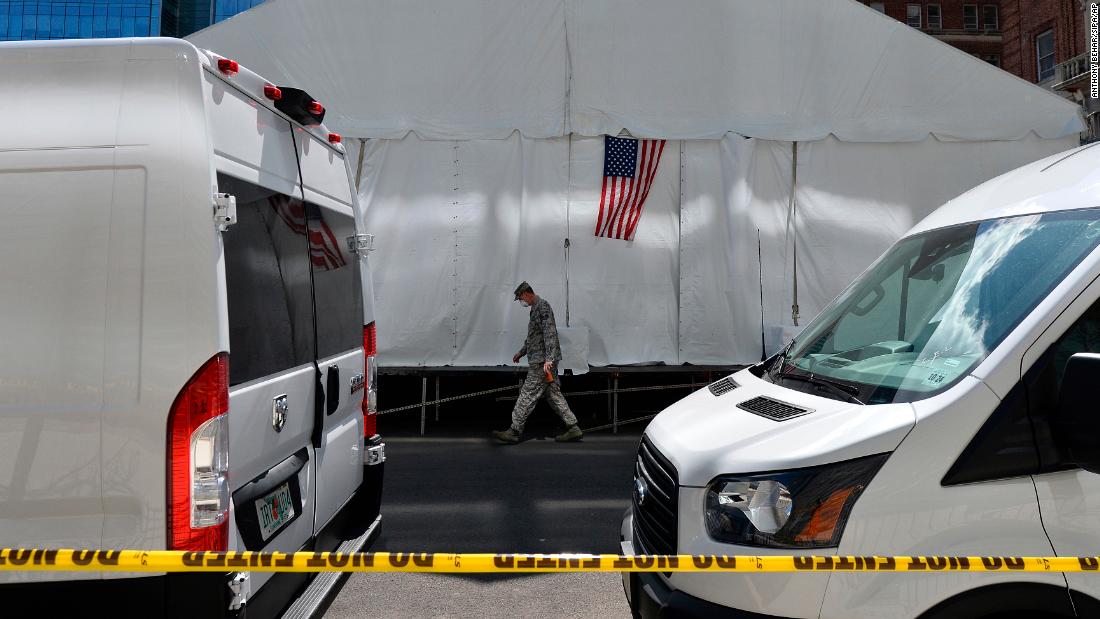 President Donald Trump approved a disaster declaration Saturday for Wyoming, the final state to get one, along with the US Virgin Islands, the Northern Mariana Islands, the District of Columbia, Guam and Puerto Rico.

In South Florida, families lined up for up to five hours before food distribution even began outside Magic City Casino, according to CNN affiliate WPLG.

And in New Jersey, the state with the second highest number of coronavirus cases, Newark Mayor Ras Baraka is asking all businesses — even those deemed essential — to shut down for “Be Still Mondays.”

The goal is to further limit the spread of the virus as the death toll rises in the state.

“We can get everything else back. What we can’t get back is people’s lives,” Baraka said.

With the Jewish holiday of Passover on Wednesday and Easter on Sunday, states are using new approaches to religious services at a time when social distancing is key in the fight against the virus.

Some families and congregations have gone online for celebrations and services, but others have continued to gather, which many local leaders have taken steps to stop.

In Kentucky, authorities will record license plates of those who show up to any gatherings and hand that information over to the local health department, which will require those individuals to stay quarantined for 14 days, Gov. Andy Beshear announced.

On Saturday night, the Justice Department said it would take action next week against regulations on religious institutions.

Various courts are already hearing cases about the regulations, but the department said it may file lawsuits alongside churches.

The mayor of Louisville, Kentucky, tried to stop a church from holding a drive-in Easter service, even though drive-in liquor stores are still permitted under the state’s stay-at-home policy. A federal judge issued a temporary restraining order Saturday that overturned the effort.

Trump said Saturday night that he hopes to make a decision “fairly soon” on when to reopen the country currently shutdown by the coronavirus pandemic. He said he will set up a council to examine the issue and will base his decision on “facts” and “instinct.”

“I’m going to have to make a decision and I only hope to God that it’s the right decision,” the President said Friday. “But I would say without question it’s the biggest decision I’ve ever had to make.”

Two weeks ago, Trump said he wanted to open the country by Easter, but Friday he said he wouldn’t do anything until he knew the country was healthy again. Internally, officials are pushing to reopen the country by next month, with specific discussions underway about May 1, a person familiar with the talks told CNN.

But government projections obtained by the New York Times show that if stay at home orders were lifted after a month, there would be a bump in demand for ventilators and the US death toll could see a dramatic increase to 200,000, the Times reported.

The Institute for Health Metrics and Evaluation at the University of Washington projects that if the country keeps social distancing measures until the end of May, about 61,500 Americans will lose their lives to the virus by August.

“If we were to stop at the national level May 1, we’re seeing (in models) a return to almost where we are now sometime in July, so a rebound,” IHME Director Dr. Chris Murray told CNN. “There’s a very substantial risk of rebound if we don’t wait to the point where most transmission is near zero in each state.”

In New York City, Mayor Bill de Blasio announced that schools there would remain closed through the end of the school year while students continued to receive remote instruction.

But that was soon undercut by Gov. Andrew Cuomo, who said that “no decision” had been made on closing schools through the end of the year, adding that he valued the mayor’s “opinion.”

De Blasio said Saturday evening he and the governor would always “work things through in the common interest of our people.”

Additionally, Cuomo said no decision has been made on when businesses will reopen. That step, he said, should be coordinated with schools.

The state will gather the best minds to study whether reopening the economy would trigger a “second wave” of infections, Cuomo said.

“The worst thing that can happen is we make a misstep and we let our emotions get ahead of our logic and fact, and we go through this again in any manner, shape or form,” he said.