Dr. Sanjay Gupta: The pandemic has become a humanitarian disaster in the United States 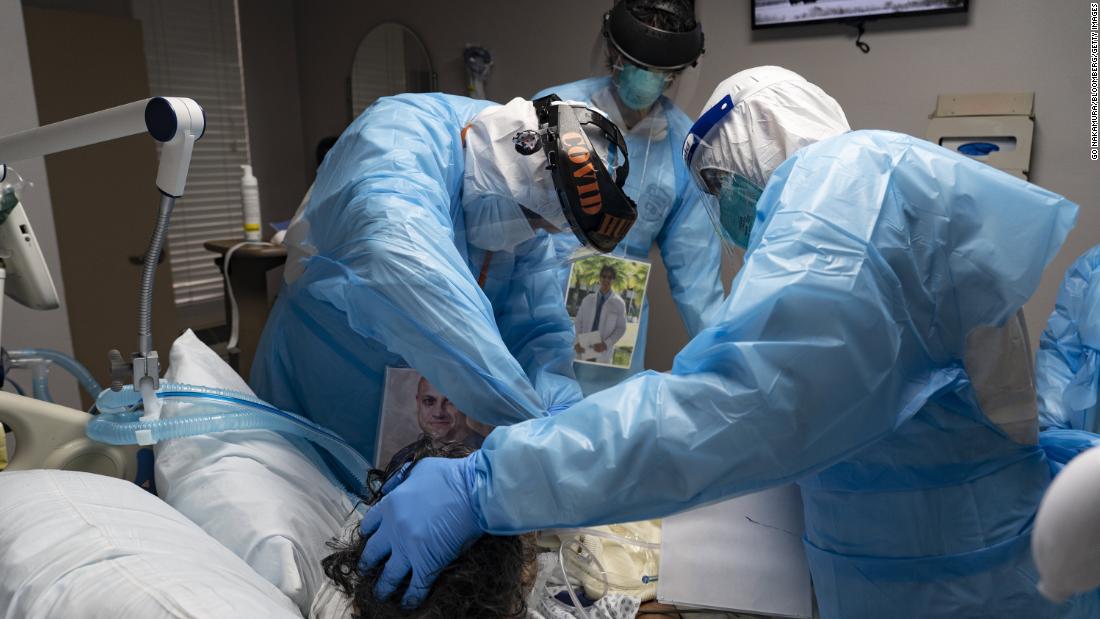 Some have been one-time natural disasters, like the aftermath of 2004 tsunami that shattered coastal communities along the rim of the Indian Ocean, near its epicenter.

While reporting there, I visited a resettlement camp in Sri Lanka, where 3,000 people had access to only one bathroom. We drove around for days, sleeping in our car and using the car battery to power our camera and lights to reveal the devastation.

There was the 2010 earthquake in Haiti, where I arrived just 14 hours after it struck. The military and large aid organizations hadn’t yet arrived, so we witnessed the immediate aftermath in Port Au Prince. The buildings had toppled to the ground and estimates were that 100,000 people were killed immediately. About another 120,000 would die in the weeks and months after. I remember young children running after the trucks that were carting off dead bodies to check if their parents were in there. To this day, I consider it one of the toughest stories I’ve ever covered.

And then, the 2011 famine in Somalia, where severe drought and a leadership vacuum led to more than a quarter-million dead, half of them children. Starving people would walk for days and days to get to the refugee camps, and by the time they arrived, they were even more malnourished and depleted. So many didn’t make it.

All of these stories are heartbreaking and horrifying in their scope and depth — the sheer number of lives lost or derailed.

I never thought I would feel that sense of loss and suffering about my own country. As this pandemic unfolds in the United States, I now count it among the worst humanitarian disasters I’ve covered.

I don’t say this lightly. Having spent two decades traveling to the most devastated places on the planet, I have seen the awful ingredients of a humanitarian crisis: a singular event or a series of events that overwhelms the medical resources leading to unimaginable death, many of which are preventable.

This week, our country passed the 10 million mark for Covid-19 cases. Nearly 250,000 Americans have died so far. A quarter million. More than all the wars, since Vietnam. It is the equivalent of 625 planes crashing this year — nearly two every single day so far. It is friends of mine who have died, and the tear-soaked conversations I have late at night with their spouses and children. They counted on me as their friend, the doctor — Mr Fix It — and my stomach aches because I can’t help but feel like I failed them.

In my memory, they live among the 220,000 killed in the Haiti earthquake and its aftermath; among the 228,000 dead from the tsunami; among the 260,000 who perished during the Somali famine.

On Thursday, the United States had a record breaking 153,496 new cases, with more than 67,000 people currently hospitalized. Hospitals all over the US are starting to be overwhelmed again, with cases rising as fast as we’ve seen since March. ICU capacity is shrinking in many states and staffing shortages are adding to the strain.

By the beginning of next year, the number of people hospitalized, struggling to breathe, isolated from their loved ones is expected to double. There are no corners that we are rounding, we are just riding a rocket ship pointed at the stars. By March 1, 439,000 lives could be lost, according to a forecast from the Institute for Health Metrics and Evaluation at the University of Washington School of Medicine.

And that, of course, is only a piece of the humanitarian disaster of Covid-19. The economic toll exacted on our society — in jobs lost, in households pushed beyond their limits, in the shrinkage and decimation of complete sectors of our economy, in mental health deterioration, in educational losses among our school children — has yet to play itself out, let alone be calculated and addressed.

According to the United Nations, a humanitarian disaster is defined as “a serious disruption of the functioning of a community or a society involving widespread human, material, economic or environmental losses and impacts, which exceeds the ability of the affected community or society to cope with using its own resources.”

The pandemic and its impact on the US so far fits the bill.

This disaster didn’t suddenly appear — it has been unfolding in slow motion since coronavirus was first declared a national emergency back in March. Some states bristled at being told they needed to shut down bars, hair salons, gyms, restaurants. The tiered plan that public health officials and experts set forth for the gradual reopening the country was almost completely ignored as states raced to restart their economies.

And even once it became clear face masks can help control the spread, many state leaders balked at imposing mandates. As of Monday, 35 states, along with the District of Columbia and Puerto Rico, have some kind of state-wide mask mandate. Some far more stringent than others. According to the IMHE, 67% of people say they regularly wear a mask when they leave the house. But in Wyoming, Idaho, and South Dakota, mask usage is below 50%.

As a sign of how bad things have been in our country, the international organization Doctors Without Borders, which brings aid where it is needed most, spent many months on the ground in the United States doing the kind of work they usually do in developing countries. I was with the Doctors without Borders in West Africa during the Ebola outbreak, in Pakistan after the terrible flooding, in DRC, in Haiti and so many other places. I never expected them to be in my home state of Michigan.

Heather Pagano, an emergency coordinator for the organization, which goes by the French acronym MSF, said it felt “pretty surreal” to be working on home soil

“At a moment when there’s a big disruption in society, then you look for where the most neglected and vulnerable people are, you should find MSF. And I think that’s what we tried to do also in this massive Covid pandemic, and here we are here in the U.S. working in nursing homes,” she told me back in August.

And we’re now going into winter, with the virus out of control and more people gathering indoors, especially for the holidays. I hate to say this, but many more people are going to get sick and die.

Again, forecast models predict that if we don’t change our behavior, by the end of the year, we’re going to have more than 300,000 people becoming infected every day. And total hospitalizations could hit 128,000 — almost double what we have now — by mid-January.

Michael Osterholm is the director of the Center of Infectious Disease Research and Policy at the University of Minnesota. He’s also a member of President-elect Joe Biden’s Covid-19 advisory board.

“What America has to understand is we are about to enter Covid hell. It is happening,” he said earlier this week on CNBC.

On CNN he said, “All that we’re doing right now doesn’t seem to be having much impact on this curve. The case numbers are going up faster and faster every day, both for cases and for hospitalizations and deaths. I don’t think we have an idea yet where this is going to top out. So, imagine how bad it is now — only anticipate what it’s going to be like over the weeks and months ahead.

How did we get here?

Lack of leadership and an overarching national strategy on the pandemic is one reason. Responsibility pushed onto the nation’s fifty governors to individually manage the crisis. For months, President Trump has falsely claimed the country is “turning the corner” on the pandemic even as members of his own administration — Dr. Anthony Fauci, Dr. Deborah Birx and Dr. Robert Redfield — were conveying a different message.

During the run-up to the election, the president held large rallies in some of the hardest hit states, where his mostly maskless supporters were crowded together.

At these rallies, and on Twitter, he mocked face masks and the media — “Covid, covid, covid” — for paying so much attention to the crisis and predicted the subject would be forgotten after Election Day.

Since the election, President Trump has been largely silent on the topic. And there’s been no word from Vice President Mike Pence, who heads the White House Coronavirus Task Force. Silence — as the country breaks records day after day.

To this point, there has been no coordination with the incoming Biden administration.

There is no center of grief in this pandemic. The virus is keeping us apart. We’re experiencing our individual losses behind closed doors — closed funeral home doors, closed nursing home doors, closed hospitals doors, closed front doors. And we can’t share our grief with one another, like we did after other national tragedies such as 9-11, Hurricane Katrina or the Sandy Hook Elementary School shooting.

Because we can’t see the grief others are experiencing, it can at times feel distant and abstract. Psychologists know that during times of tragedy, we empathize with those who are suffering; we’re moved and we want to help them.

But once the number of people affected starts to grow, not only is our compassion divided among all those who are suffering, but our overall amount of compassion goes down. That’s a phenomenon called “compassion fade.”

But Shariff said we can’t just throw our hands up because there are still circumstances in which we have to do something.

“We’re relying on people’s… emotional system — and unreliable emotional system — to compel them to wear a mask, when maybe the best thing to do would be to outsource the decision-making to experts who are looking at the data in a dispassionate way. And saying, Well, in this case, everybody should be wearing a mask,” said Shariff.

The frog in the pot

Regardless of how we got here, the real tragedy, the real humanitarian disaster, is that much of this was foreseeable and preventable. Public health experts have given us the warnings and the tools, however basic, throughout this pandemic: physically distance, wear a face mask, wash our hands often.

Other countries, such as South Korea and New Zealand, have done a much better job at controlling the virus. We know it can be done.

We’ve been living like the fabled frog in a pot of tepid water. At first it doesn’t feel the heat, doesn’t perceive the danger. But gradually the temperature goes up until the water is close to boiling, and by then, for the frog, it’s too late.

But for us, it’s still not too late. Depending on your perspective, maybe it’s never too late.

Let’s follow the advice of experts who have been here all along to help steer us to safety. Now, they’re asking us to please be careful going into the holidays.

Consider it Thanksgiving food for thought — a big helping of reciprocal altruism. Even in the face of these relentlessly growing numbers and grief, we have so much to be grateful for, including that we can be the ones who help bring this disaster to an end.