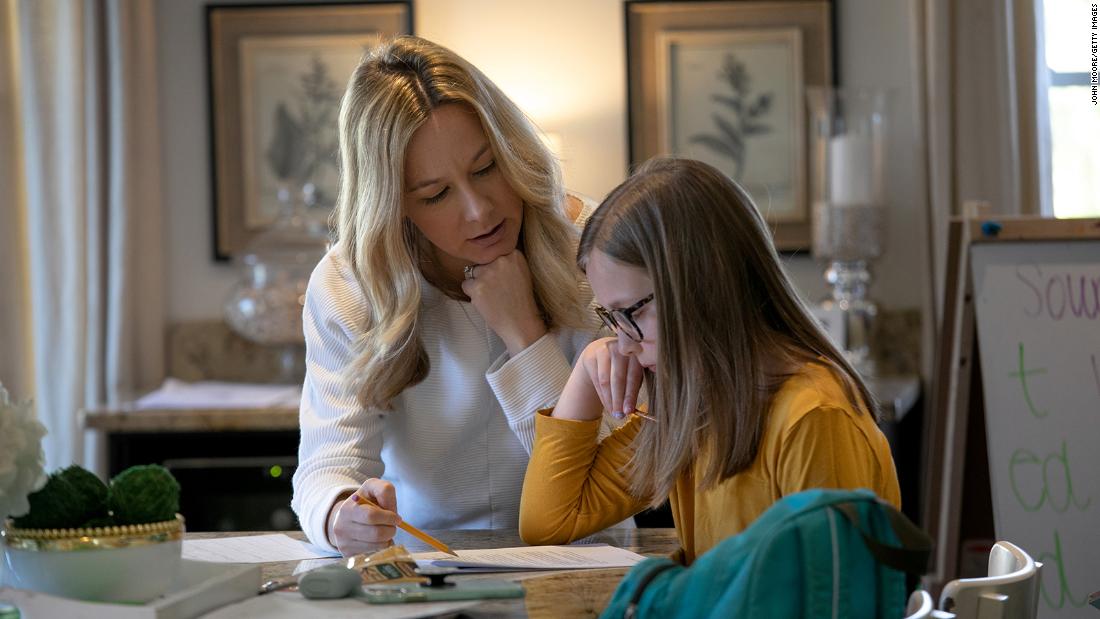 “I wanted to keep a sense of structure and normalcy because my 8-year-old has anxiety, and I know that not having structure would be worse,” said Kneeland, of Oakland, California.

They did math with lemons as they made lemonade. They read. They designed a schedule that permitted Kneeland to work some and them to learn some.

When the barrage of assignments and meeting codes started arriving from school in April, the new regime resurrected that anxiety. “My 5-year-old started flipping out and refusing to do anything and hiding in the closet,” Kneeland said.

Then she realized: “We could do this and have this negative experience. Or I could just let go of it,” she said. “For our family, this doesn’t work.”

Educators have heroically and historically transitioned tens of millions of kids from brick-and-mortar education to a digital one, and at least 43 states, four US territories and the District of Columbia won’t resume in-person school this academic year.

But not all kids can or are showing up.

In Minnesota’s St. Louis Park school district, hundreds of the district’s 4,618 primary and secondary school students were absent last month. Some 15,000 high school students were completely absent from online learning, and 40,000 didn’t check in regularly in Los Angeles. In Clark County, Nevada, the school district was still trying to track down 100,000 students in late April.

But amid the Covid-19 crisis, even many without those barriers find the new system, in which parents work full time and teach their children, untenable.

Many kids aren’t participating because they can’t. But in some cases, kids are opting out without dropping out.

The impossibility of dual roles

Megan Kinch, a single parent and electrician in Toronto, decided quickly that two-hour Zoom sessions weren’t working for her kindergartner.

Instead, her child is practicing yoga; writing a story about her secret life as a mermaid; working on reading, language and math programs; and learning resilience. She’s also helping Kinch deliver groceries to elderly neighbors and participate in community organizing.

“We’re dealing with my kid’s emotional needs and the fear and this crazy situation,” Kinch said. “That’s way more important than keeping up with the curriculum for grade 1.”

When Sarah Parcak tweeted in April that she loved her son’s wonderful teachers but was letting her 7-year-old son opt out of online school, the Twittersphere erupted in commiseration.

That same day, Parcak, who is an archeology professor at the University of Alabama at Birmingham, won a Guggenheim fellowship. If she can’t do it, many without esteemed prizes thought, we’re off the hook.

“Everyone’s contending with this completely impossible situation,” Parcak said. “We can’t work full time and teach at the same time. It’s literally impossible, and I refuse to do it.”

As an archaeologist, she’s studied childhood in ancient cultures, and she says that at no time in human history have humans been workers, parents and teachers all (literally) at the same moment.

Parcak is following something closer to the ancient Egyptian childhood model, where children become mini apprentices to their parents. Her son reads. She reads to him. He watches documentaries. They garden.

“We’re not sitting down with him for three hours a day to write stories and do math worksheets,” she said. “There’s enrichment, but this allows us to get work done.”

Kneeland’s kids partake of at least four homegrown academic activities each day and participate in class via Zoom video sessions. “The only important thing is the relationships and the connection,” she said. “I want them to see their teachers and their friends.”

Trying to learn through the trauma

Parcak acknowledged that her son is privileged to opt out in favor of a better solution, not for lack of resources. And Kneeland’s job allows her to devote time to her kids’ education. “There are so many people out there who can’t do that, and I worry about those parents and students,” she said. “Obviously the digital divide is magnifying those inequities that are already there.”

Even kids in relatively stable homes may be struggling right now. Studies have shown that trauma impacts memory, focus and executive function, among many other skills. “The kids are in crisis because all sense of normalcy has been ripped away from them,” Kneeland said.

Meanwhile, few teachers or students have trained to work remotely. “The tendency for teacher training is still very much face-to-face,” Stephanie DeMichele, an Ohio-based digital learning designer and distance learning expert, said. “We’re just substituting, taking what we had on paper and just moving it into a Google doc.”

Meeting special needs from far away

Some parents of kids with disabilities find those needs just can’t be fulfilled virtually. “There are students who have unique needs or impairments such as very low verbal functioning, who are much more engaged in hands-on learning and experiential learning, which makes distance learning with a professional through the computer challenging,” said Erin Maguire, president of the Council for Administrators of Special Education.

Some kids with learning differences, whether on the autism spectrum or with specific emotional or physical needs, may require a level of professional care that parents aren’t qualified to give, even with professional consultation.

Legally, in most cases, schools still need to provide what’s called FAPE, or free and appropriate public education, to kids with Individualized Education Programs, or IEPs, but how to do that during a pandemic is a conundrum for some, and it’s still being worked out, legally and educationally.

The legalese of absenteeism

Children, of course, are legally required to attend school, and school funding is often tied to enrollment and attendance. Some states like Ohio are trying to uncouple them, because absence rates are skyrocketing.
Chronic absence — broadly defined as missing 10 percent or more of the school year or so much that a student is academically at risk — is usually a sign that something’s not right in a student’s life, from academic challenges to disruptive home lives.

But these are strange times, when that lack of engagement might not reflect the traditional reasons for chronic absence. States seem to be suspending truancy laws, Hedy Chang, director of Attendance Works, a nonprofit aimed at lowering chronic absence, said. There are just too many kids who have barriers to virtual attendance to apply them right now.

Tell the teacher where you are

Teachers still need to measure kids’ progress, if only to know how to meet their needs next year. Because of this need, and because teachers need to know the cause of absence — lack of access versus choosing sanity over schoolwork — to see if they can help, it’s important to communicate.

“You absolutely should be in contact with your teacher and let them know what’s going on. Otherwise they might be wasting resources trying to track you down,” Chang said.

“I have 16 students, and the most I’ve ever had sign in is 12,” she said. Each one has a device, but they don’t all have internet or parents available to help. Some have told her they’re not “showing up.”

She has spent considerable time tracking the others down, making sure they’re OK, and sending them books and supplies if they can’t participate online.

“I wrote a long email to the second grade teacher about why we’re opting out and she was very validating and wonderful,” Kneeland said. “They were really clear with the same message: Different families need different things. They want the work there for parents who want it.”

Kneeland’s kids’ school has already said every kid will advance to the next grade, so she doesn’t need to worry about them being held back. She’s fully confident in their teachers’ ability to handle getting kids back on track academically come fall.

Kneeland is clear that her kids’ teachers didn’t fail them. Rather a system that shook to life suddenly is contending with more competing needs than possible. In cases where people can fare better on their own — where sanity trumps other considerations — some are.

Including everyone in options

Kneeland believes that, as we try to level out inequities, each family should figure out what works best. “I think this should be normalized for everyone, no matter the reason,” she said. The main thing, she said, is keeping children safe and supported — and keeping parents sane.

“If [my children] look back on this time, I don’t want their main memory to be me yelling at them for not doing their homework,” she said.