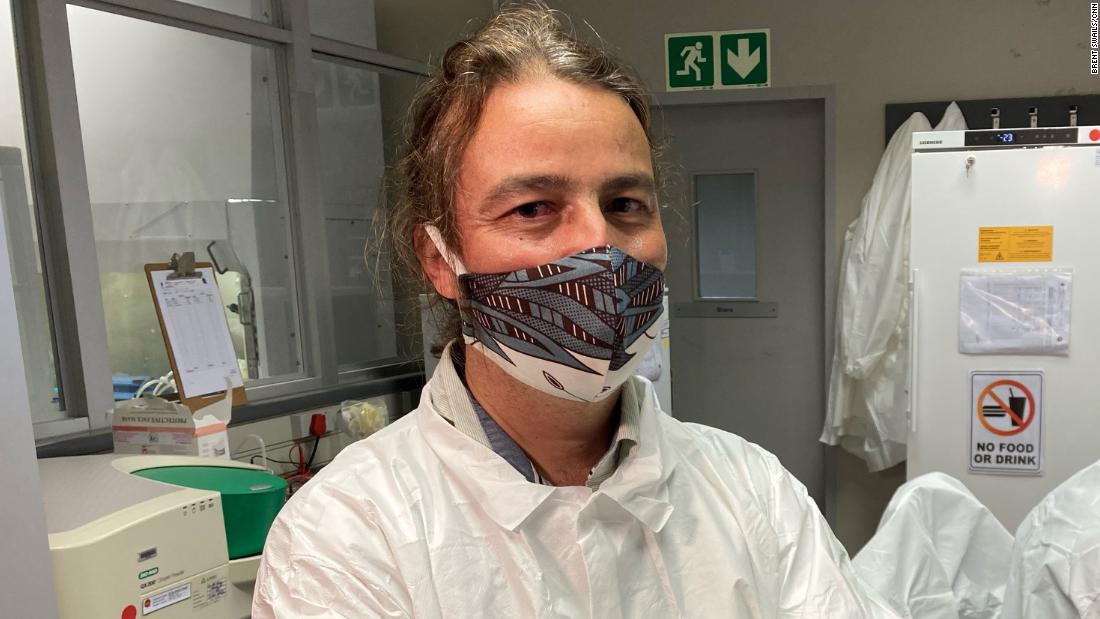 In mid-November, Tulio de Oliveira, who leads a genetics lab in South Africa, began receiving anxious phone calls from physicians in the Eastern Cape province who were seeing an explosive growth in Covid-19 patients. Hospitals were quickly becoming overrun. The increase had seemingly come out of nowhere.

“It was shocking,” said de Oliveira, a professor at the University of KwaZulu-Natal in Durban.

De Oliveira immediately asked for samples of the virus from patients’ noses so he could genetically sequence them.

In less than a week, he sequenced 16 samples. All 16 had similar mutations — and an unusually high number of mutations.

“I said to myself, ‘there’s something very strange here,’ ” de Oliveira said.

De Oliveira, a prominent virus hunter, had discovered a new variant of the coronavirus.

The 16 samples were hundreds of kilometers apart from each other in the Eastern Cape and KwaZulu-Natal provinces, so he had a hunch the variant was spreading quickly.

To add to the concerns, some of the mutations were in the genes related to the spikes that sit atop the virus. Tests to detect the virus, as well as Covid-19 drugs and vaccines, have targeted those spikes. The concern is that if the spikes change, it’s possible that tests, drugs and vaccines might not work as well.

In the next step of his virus hunt, de Oliveira reached out to labs in the Network for Genomic Surveillance in South Africa, asking them to send samples of viruses from their Covid-19 patients from far and wide.

One of the labs was in Stellenbosch, a town that’s home to South Africa’s famed wineries.

De Oliveira said Susan Engelbrecht, the senior scientist at the Stellenbosch lab, told him she’d be shocked if the new variant had reached her area, since it’s more than 700 kilometers away from Nelson Mandela Bay, where the spread of the variant was first spotted.

“I made a bet with her, that if we found the variant in more than 50% of the samples from Stellenbosch, she would give me a bottle of wine,” de Oliveira said. “She said not only would she give me bottle of wine, she would eat her hat, too.”

Of the 67 samples from Stellenbosch, 58 were the same variant found in Nelson Mandela Bay.

De Oliveira is considering which Stellenbosch wine he’ll choose — but he knows it will be an expensive one.

“I would like to request an urgent addition to the agenda today – to raise an alert of some preliminary findings from South Africa,” de Oliveira wrote.

Permission was granted, and de Oliveira alerted the other scientists on the call, who hailed from around the world, about this strange new variant he was seeing in South Africa. He noted that it included a mutation in a position of the spike protein called N501Y, and he encouraged his colleagues to look for similar mutations in their countries.

Andrew Rambaut, a professor at the University of Edinburgh, took up the task. He and his colleagues looked in the UK’s genomic database and found a variant containing the N501Y mutation, which was spreading quickly in parts of southeast England. They published their findings on December 20.
That day, Rambaut tweeted: “The hint to look for N501Y came from @Tuliodna who was tracking this mutation in South Africa.”

“I’m just so grateful that we have this [international] collaboration,” she said.

‘We’re playing a very dangerous game with this virus’

If a virus changes its genetics in just the right way, tests might not be able to detect it as easily, and vaccines might not work as well.

“We’re playing a very dangerous game with this virus right now,” Van Kerkhove said, given the explosive growth in the United States and other countries. “What worries us is that the longer this spreads, the more opportunities it has to change.”

These variants were found in South Africa and the UK, but it’s not clear where they began. So far, it appears that both spread more quickly, but they are not more deadly. Vaccine makers and other scientists are studying whether the variants pose a challenge to the vaccines.

Keeping an eye on the virus — genetically sequencing samples from large numbers of people — is “a fundamental aspect of controlling the virus” and an important way “to understand your enemy,” Van Kerkhove said.

Trevor Bedford, a genomic epidemiologist at the Fred Hutchinson Cancer Research Center, gives the example of how genetic sequencing this summer helped link 59 Covid-19 cases in various parts of Ireland back to one flight. Knowing the passengers caught it on the plane helped with contact tracing and control activities.

“The sequencing really kind of clinched it,” Bedford said.

Sequencing the coronavirus in the US

On December 20, the day the British scientists published their findings, a Slack group for US virus hunters lit up.

Perhaps the UK and South Africa variants or other worrisome mutations existed in the United States, too.

“That kind of definitely lit a fire under people,” said Bedford, who’s a member of a Slack group for SPHERES, a new US consortium to coordinate coronavirus genetic sequencing led by the US Centers for Disease Control and Prevention.
So far in the pandemic, US genomic sequencing has lagged behind other countries. For example, the UK has sequenced virus samples from about 146,000 people, and the US has sequenced samples from only 58,000 people, according to the GISAID database, even though the US had far more Covid-19 cases.

Watching other countries, like the UK and South Africa, excel at genomic sequencing can be hard, Bedford said.

“Of course, it’s frustrating,” he said.

In South Africa, once de Oliveira got the tip from physicians that case numbers were growing, it took him and his colleagues only about two weeks to identify the new variant. Once British researchers got the tip from de Oliveira, it took them less than three weeks to find their own variant and publish their study.

Things don’t move that quickly in the US, Bedford said.

In the United States, the labs that have coronavirus samples from patients often don’t work directly with the scientists who will sequence those samples. That means the scientists have to identify those labs, ask them to save samples, and then make legal agreements for sharing the samples.

“Part of the reason that we’re doing such a bad job is we have [these] structural issues,” Bedford said.

South Africa and the UK, on the other hand, have national health services, so the labs that do Covid-19 testing and the experts that do sequencing typically work for the same entity.

“They’ve got a single national health system and a single national microbiology service, which makes coordinating things a lot easier,” said Dr. Gregory Armstrong, director of the Office of Advanced Molecular Detection at the CDC’s National Center for Emerging and Zoonotic Infectious Diseases. “We don’t have a system that’s anywhere near as robust as the UK system.”

Another reason the US lags behind is that the UK has invested huge sums of money in genomic sequencing.

“The system in the UK is really the gold standard for how to do genomic surveillance,” Armstrong said. “I don’t think we’re ever going to be able to get up to that level.”

The CDC is trying to shore up the US surveillance system, with recent grants of millions of dollars to state and university labs.

The CDC’s goal is to more than double the number of coronavirus genomes sequenced in the US, Armstrong said. The sequencing is done in labs at the CDC, state health departments, universities and private companies.

The US is now sequencing about 3,000 samples a week, and the CDC hopes in the next two weeks to more than double that to about 6,500 per week, he said.

Scientists around the world are eager to see the change.

“I’m optimistic that this is going to get better quickly,” Van Kerkhove said.